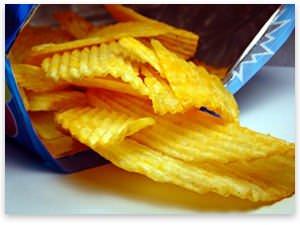 [An MP3 audio file of this article, narrated by Nathaniel Foote, is available for download.]

By pure luck, I happened to sit down next to a man last week who has been my benefactor for my entire life and the large part of his, and yet we had never met. In fact, though he has been serving me faithfully for three decades, looking after my well-being and trying to improve my standard of living, he didn't even know my name. Actually he still doesn't, because it is slightly odd to get too personal with the guy in the next seat on a plane. We all know this. And yet I did tell him of my deep gratitude for all he has done.

This man is in charge of marketing for one of six manufacturing plants in North America that makes oriented polypropylene for packaging materials. This substance is called OPP for short. He goes around to companies that make stuff like drinks and candies and other products and explains to them the advantages of OPP — about which more in a bit.

This man is on the road constantly and has a stack of airline-rewards cards to prove it. He is like the George Clooney character in the movie Up in the Air — a seasoned traveler married to his work. His work is to be the eyes and ears of the company as it deals with its product purchasers. His life is lived in the B2B — the business-to-business transactions that are invisible to the consuming public.

His vocabulary is industry specific, filled with neologisms that no one outside of the packaging world could understand. He can tell you the chemical properties of a bag from five feet away. He can explain why a bag is easier to tear one way and harder the other. He knows the history, the process, the competition, plus the name of every large-scale bag-purchasing manager in North America, and he is happy to talk about it all.

What is his function? He is the man who makes the inventions and the productions part of our lives. Without the person on the front lines actually selling the product, everything that went into the invention and production is pointless. He is the interface between the raw materials and the final product, the man who has to have all the answers that link the great chain of the structure of production from first to last.

As for his product, you and I both know OPP well, though we probably didn't know what it is called. It is the stuff that is used to make potato-chip bags. It is the reason that the contents stay crisp no matter what the temperature outside. You can dip the bag in water and it changes nothing. The air can be hot or cold, and still the chips inside are unchanged. The same material wraps candy like Snickers and the effect is the same.

It is also the reason that these bags can be so beautiful. OPP loves printing. It is a perfect template for designers. The results never rub off on your fingers. Nor does the printing fade in the sun. It can accept even the most subtle gradations in color. You could print a work of Michelangelo on OPP and hang it in a museum.

It turns out that potatoes fried in oil are super vulnerable to becoming rancid. Maybe you thought it was chemical preservatives (up with those too!) that prevented this. That is part of the answer but not the whole answer. The real reason is OPP. This is what stops the degenerative process. This is not a problem for other fried items, like pork rinds, which is why they often come in see-through bags. OPP is not see-through, and that is good. The product inside doesn't like the light. OPP keeps that out too.

OPP has other nice features. It has a very low "dead-fold" capacity, which is why, when you wad up a potato chip bag, it bounces right back to its original shape. This is to protect the contents inside. That's why, in the 1960s, potato chips came with crumbled contents but today they are mostly intact and perfect. You thought it was just because it was filled with air? Well, ask yourself why the air doesn't escape. The answer again: OPP. It seals perfectly. This stuff is impenetrable.

And get this: this is a petroleum product. That's right, it is made of a material derived from oil. So the price of the stuff fluctuates according to the price of oil. When the price of oil goes up, your chips become more expensive, due mainly to the packaging, which is also why the OPP industry is firmly attached to the idea of liberalizing the regulations on the discovery and refining of oil. My benefactor marketing manager is very interested in this.

Now, all of this is pretty cool and wonderful. But let's get down to the core rationale here. What is all the fuss about? Why was OPP invented, and why is it marketed, and why it is used so much around the world? Why does this man spend his life on the road and follow every bit of industry news? What is the point of all of this?

It is for one reason: my well-being. Yours too. It is to please us and make our lives that much better. It is for the consumer that the producer produces, and it is for the consumer that everyone in all stages of production strives to make an ever-better product. It all comes down to that bag of chips you pick up with your submarine sandwich. This is why millions of people in the OPP industry around the world dance the dance. It is why the potatoes are grown, chopped, fried, bagged, and shipped to millions and millions of places.

The heck of it is that these people get no credit. No bag of chips says: this bag is made by Joe's OPP factory. No, they are anonymous benefactors of society. Hardly anyone thinks of them. And yet, if you bought a bag of chips that is full of rancid crumbs, you would know the difference. You would be annoyed at the store that sold them, at the company that made them, and maybe even at the economic system that allows people to profit from selling bad stuff. Private OPP producers prevent this from happening, millions and millions of times per day.

You and I are running this show, and we didn't even know it. The producers of these bags are serving us slavishly every day, and we don't know or care. And somehow it all happens without a central planner, without government mandates, and without state-owned factories or smart people at the top directing the process from beginning to end. All that needs to take place to bring about this complex and brilliant system is that we have to have a desire: a desire for a good potato chip. The rest happens on its own — a self-managing system that responds to the tiniest of signals.

So, I would like to send a message to my benefactor who has devoted his life to explaining to food producers the merits of OPP. My message is, thank you. I suspect that I might be the first consumer who has ever said so, but in my ideal world, billions of people would be giving thanks to you and everyone else like you. You are all servants of the great cause of making the world a better place to live.