4. Binary Intervention: Taxation > 3. The Incidence and Effects of... > A. The General Sales Tax and the Laws...

In the dynamic real economy, money income consists of wages, ground rents, interest, and profits, counterbalanced by losses. (Ground rents are also capitalized on the market, so that income from rents is resolvable into interest and profit, minus losses.) The income tax is designed to tax all such net income. We have seen that sales and excise taxes are really taxes on some original-factor incomes. This has been generally ignored, and perhaps one reason is that people are accustomed to thinking of income taxation as being uniformly levied on all incomes of the same amount. Later, we shall see that the uniformity of such a levy has been widely upheld as an important “canon of justice” for taxation. Actually, no such uniformity does or need exist. Excise and sales taxes, as we have seen, are not uniformly levied, but are imposed on some income receivers and not others of the same income class. It must be recognized that the official income tax, the tax that is generally known as the “income tax,” is by no means the only form in which income is, or can be, taxed by the government.17

An income tax cannot be shifted to anyone else. The taxpayer himself bears the burden. He earns profits from entrepreneurial activity, interest from time preference, and other income from marginal productivity, and none can be increased to cover the tax. Income taxation reduces every taxpayer's money income and real income, and hence his standard of living. His income from working is more expensive, and leisure cheaper, so that he will tend to work less. Everyone's standard of living in the form of exchangeable goods will decline. In rebuttal, much has been made of the fact that every man's marginal utility of money rises as his money assets fall and, therefore, that there may be a rise in the marginal utility of the reduced income obtainable from his current expenditure of labor. It is true, in other words, that the same labor now earns every man less money, but this very reduction in money income may also raise the marginal utility of a unit of money to the extent that the marginal utility of his total income will be raised, and he will be induced to work harder as a result of the income tax. This may very well be true in some cases, and there is nothing mysterious or contrary to economic analysis in such an event. However, it is hardly a blessing for the man or for society. For, if more work is expended, leisure is lost, and people's standards of living are lower because of this coerced loss.

In the free market, in short, individuals are always balancing their money income (or real income in exchangeable goods) against their real income in the form of leisure activities. Both are basic components of the standard of living. The greater their exchangeable-goods income, in fact, the higher will be their marginal utility of a unit of leisure time (nonexchangeable goods), and the more proportionately will they “take” their income in the form of leisure. It is not surprising, therefore, that a coerced lower income may force individuals to work harder. Whichever the effect, the tax lowers the standard of living of the taxpayers, either depriving them of leisure or of exchangeable goods.

In addition to penalizing work relative to leisure, an income tax also penalizes work for money as against work for a return in kind. Obviously, a relative advantage is conferred on work done for a nonmonetary reward. Working women are penalized as compared with housewives; people will tend to work for their families rather than enter into the labor market, etc. “Do-it-yourself” activities are stimulated. In short, the income tax tends to bring about a reduction in specialization and a breakdown of the market, and hence a retrogression in living standards.18 Make the income tax high enough, and the market will disintegrate altogether, and primitive economic conditions will prevail.

The income tax confiscates a certain portion of a person's income, leaving him free to allocate the remainder between consumption and investment. It might be thought that, since we may assume time-preference schedules as given, the proportion of consumption to savings-investment—and the pure interest rate—will remain unaffected by the income tax. But this is not so. For the taxpayer's real income and the value of his monetary assets have been lowered. The lower the level of a man's real monetary assets, the higher will his time-preference rate be (given his time-preference schedule) and the higher the proportion of his consumption to investment spending. The taxpayer's position may be seen in the diagram in Figure 4. 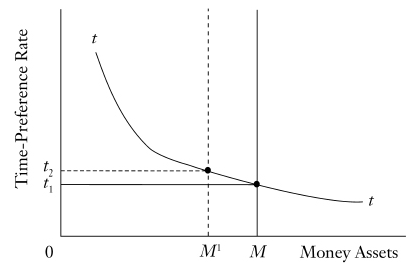 Figure 4 is a portrayal of an individual taxpayer's time-preference schedule, related to his monetary assets. Let us say that the taxpayer's initial position is a stock of 0M; tt is his time-preference curve. His effective time-preference rate, determining the ratio of his consumption to his savings-investment is t1. Now the government levies an income tax, reducing his initial monetary assets at the start of his spending period to 0M1. His effective time-preference rate is now higher, at t2. We have seen that an individual's real as well as nominal money assets must decline in order for this result to take place; if there is deflation, the value of the monetary unit will increase roughly in proportion, and, in the long run, time-preference ratios, ceteris paribus, will not be changed. In the case of income taxation, however, there will be no change in the value of the monetary unit, since the government will spend the proceeds of taxation. As a result, the taxpayer's real as well as nominal money assets decline, and decline to the same extent.

It might be objected that the government officials or those subsidized receive additional money, and the fall in their time-preference ratios may well offset, or balance, the rise in the rate from the taxpayers’ side. It could not be concluded, then, that the social rate of time-preference will rise, and savings-investment particularly decrease. Government expenditures, however, constitute diversion of resources from private to government purposes. Since the government, by definition, desires this diversion, this is a consumption expenditure by the government.19 The reduction in income (and therefore in consumption and savings-investment) imposed on the taxpayers will therefore be counterbalanced by government consumption-expenditure. As for the transfer expenditures made by the government (including the salaries of bureaucrats and subsidies to privileged groups), it is true that some of this will be saved and invested. These investments, however, will not represent the voluntary desires of consumers, but rather investments in fields of production not desired by the producing consumers. They represent the desires, not of the producing consumers on the free market, but of exploiting consumers fed by the unilateral coercion of the State. Once let the tax be eliminated, and the producers are free to earn and consume again. The new investments called forth by the demands of the specially privileged will turn out to be malinvestments. At any rate, the amount consumed by the government insures that the effect of income taxation will be to raise time-preference ratios and to reduce saving and investment.

This line of reasoning is correct in its explanation of the investment-consumption process. It suffers, however, from one grave defect: it is irrelevant to problems of taxation. It is true that saving is a fructifying agent. But the point is that everyone knows this; that is precisely why people save. Yet, even though they know that saving is a fructifying agent, they do not save all their income. Why? Because of their time preference for present consumption. Every individual, given his current income and value scales, allocates that income in the most desired proportion among consumption, investment, and addition to his cash balance. Any other allocation would satisfy his desires to a lesser extent and lower his position on his value scale. There is therefore no reason here to say that an income tax especially penalizes savings-investment; it penalizes the individual's entire standard of living, encompassing present consumption, future consumption, and his cash balance. It does not per se penalize saving any more than it does the other avenues of income allocation.

There is another way, however, in which an income tax does, in fact, levy a particular burden on saving. For the interest return on savings-investment, like all other earnings, is subject to the income tax. The net interest rate received, therefore, is lower than the free-market rate. The return is not consonant with free-market time preferences; instead, the imposed lower return induces people to bring their savings-investment into line with the reduced return; in short, the marginal savings and investments, now not profitable at the lower rate, will not be made.

The above Fisher-Mill argument is an example of a curious tendency among economists generally devoted to the free market to be unwilling to consider its ratio of consumption to investment allocations as optimal. The economic case for the free market is that market allocations tend at all points to be optimal with respect to consumer desires. The economists who favor the free market recognize this in most areas of the economy but for some reason show a predilection for and special tenderness toward savings-investment, as against consumption. They tend to feel that a tax on saving is far more of an invasion of the free market than a tax on consumption. It is true that saving embodies future consumption. But people voluntarily choose between present and future consumption in accordance with their time preferences, and this voluntary choice is their optimal choice. Any tax levied particularly on their consumption, therefore, is just as much a distortion and invasion of the free market as a tax on their savings. There is nothing, after all, especially sacred about savings; they are simply the road to future consumption. But they are no more important than present consumption, the allocation between the two being determined by the time preferences of all individuals. The economist who shows more concern for free-market savings than he does for free-market consumption is implicitly advocating statist interference and a coerced distortion of resource allocation in favor of greater investment and lower consumption. The free-market advocate should oppose with equal fervor coerced distortion of the ratio of consumption to investment in either direction.23

As a matter of fact, we have seen that income taxation, by other routes, tends to distort the allocation of resources into more consumption and less savings-investment, and we have seen above that attempts to tax consumption in the form of sales or production taxation must fail and end as levies on incomes instead.