11. Money and Its Purchasing Power > 5. The Demand for Money > F. Hoarding and the Keynesian System

To the great bulk of writers “hoarding”—an increase in the demand for money—has appeared an unmitigated catastrophe. The very word “hoarding” is a most inappropriate one to use in economics, since it is laden with connotations of vicious antisocial action. But there is nothing at all antisocial about either “hoarding” or “dishoarding.” “Hoarding” is simply an increase in the demand for money, and the result of this change in valuations is that people get what they desire, i.e., an increase in the real value of their cash balances and of the monetary unit.11 Conversely, if the people desire a lowering of their real cash balances or in the value of the monetary unit, they may accomplish this through “dishoarding.” No other significant economic relation—real income, capital structure, etc.—need be changed at all. The process of hoarding and dishoarding, then, simply means that people want something, either an increase or a decrease in their real cash balances or in the real value of the monetary unit, and that they are able to obtain this result. What is wrong with that? We see here simply another manifestation of consumers’ or individuals’ “sovereignty” on the free market.

Furthermore, there is no theoretical way of defining “hoarding” beyond a simple addition to one's cash balance in a certain period of time. Yet most writers use the term in a normative fashion, implying that there is some vague standard below which a cash balance is legitimate and above which it is antisocial and vicious. But any quantitative limit set on the demand-for-money schedule would be completely arbitrary and unwarranted.

One of the two major pillars of the Keynesian system (now happily beginning to wane after sweeping the economic world in the 1930's and 1940's) is the proclamation that savings become equal to investment only through the terrible route of a decline in social income. The (implicit) foundation of Keynesianism is the assertion that at a certain level of total social income, total social expenditures out of this income will be lower than income, the remainder going into hoards. This will lower total social income in the next period of time, since, as we have seen, total income in one “day” equals, and is determined by, total expenditures in the previous “day.”

The Keynesian “consumption function” plays its part in establishing an alleged law that there exists a certain level of total income, say A, above which expenditures will be less than income (net hoarding), and below which expenditures will be greater than income (net dishoarding). But the basic Keynesian worry is hoarding, when total income must decline. This situation may be diagramed as in Figure 78. 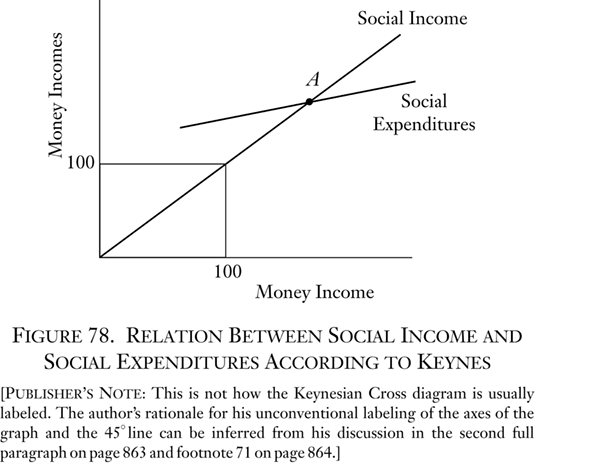 Below, we shall investigate the validity of this alleged law and the “consumption function” on which it rests. But suppose that we now grant the validity of such a law; the only comment can be an impertinent: So what? What if there is a fall in the national income? Since the fall need only be in money terms, and real income, real capital, etc., may remain the same, why any alarm? The only change is that the hoarders have accomplished their objective of increasing their real cash balances and increasing the real value of the monetary unit. It is true that the picture is rather more complex for the transition process until equilibrium is reached, and this will be treated further below (although our final conclusion will be the same). But the Keynesian system attempts to establish the perniciousness of the equilibrium position, and this it cannot do.

Therefore, the elaborate attempts of the Keynesians to demonstrate that free-market expenditures will be limited—that consumption is limited by the “function,” and investment by stagnation of opportunities and “liquidity preference”—are futile. For even if they were correct (which they are not), the result would be pointless. There is nothing wrong with hoarding or dishoarding, or with “low” or “high” levels (whatever that may mean) of social money income.

The Keynesian attempt to salvage meaning for their doctrine rests on one point and one point alone—the second major pillar of their system. This is the thesis that money social income and level of employment are correlated, and that the latter is a function of the former. This assumes that a certain “full employment” level of social income exists below which there is correspondingly greater unemployment. This can be diagramed as in Figure 79. 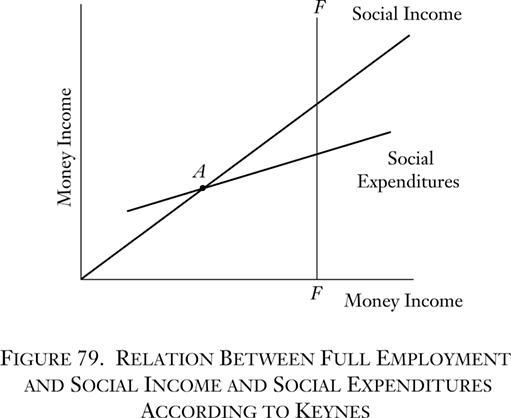 On the previous diagram is superimposed a vertical FF line, which represents the point of alleged “full-employment” social income. If the intersection A is below (to the left of) the FF line, then there is permanent unemployment corresponding to the distance by which A falls short of that line.

Keynesians have also attempted, with little success, to give meaning to an equilibrium position where A falls to the right of the FF line, identifying this with inflation. Inflation, as we shall see below, is a dynamic process, the essence of which is change. The Keynesian system centers around the equilibrium position and therefore is hardly well equipped to analyze an inflationary situation.

The nub of the Keynesian critique of the free market economy, then, rests on the involuntary unemployment allegedly caused by too low a level of social expenditures and income. But how can this be, since we have previously explained that there can be no involuntary unemployment in a free market? The answer has become evident (and is admitted in the most intelligent of the Keynesian writings): The Keynesian “underemployment equilibrium” occurs only if money wage rates are rigid downward, i.e., if the supply curve of labor below “full employment” is infinitely elastic.13 Thus, suppose there is a “hoarding” (an increased demand for money), and social income falls. The result is a fall in the monetary demand curves for labor factors, as well as in all other monetary demand curves. We would expect the general supply curve of labor factors to be vertical. Since only money wage rates are being changed while real wage rates (in terms of purchasing power) remain the same, there will be no shift in labor/leisure preferences, and the total stock of labor offered on the market will remain constant. At any rate, certainly no involuntary unemployment will arise. 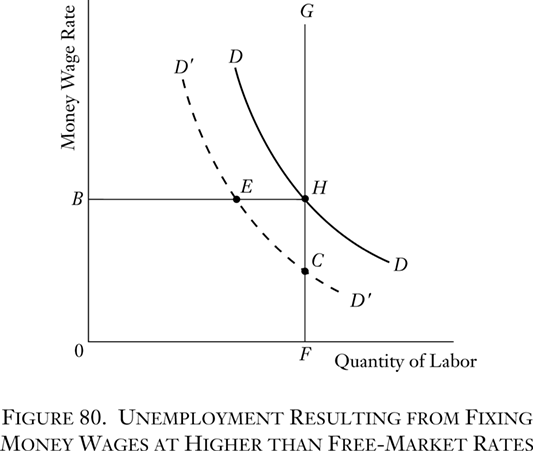 The original demand curve for labor is DD (for simplicity of exposition we assume as meaningful the concept of “demand for labor” in general). Total stock of labor in the society is 0F, or at least that is the stock put forward upon the market. Now an increase in the demand for money shifts all demand curves downward as all money prices fall. If wage rates are free to fall, the intersection point will move from H to C and nominal wage rates reduced accordingly, from FH to FC.

There is still “full employment” at level 0F. Now suppose however, that a union sets a minimum money wage rate of 0B (or FH). Then the supply-of-labor curve becomes BHG; horizontal up to FG and vertical from there on. The new demand curve D′D′ will now intersect the supply of labor at point E instead of point C. Total amount of labor now employed is reduced to BE, and EH are now unemployed as a result of the union action.

Keynes’ own exposition tended to run in terms of real rather than money magnitudes—real social income, real expenditures, etc.14 Such an analysis obscures dynamic considerations, since transactions take place at least superficially in monetary terms on the market. However, the essential conclusion of our analysis remains unchanged if we pursue it directly in real terms. Instead of falling, demand curves in real terms will now remain the same. This is true for the labor market as well. Instead of being depicted on a diagram as a horizontal line at existing wage rates, the effect of union action would have to be shown as a horizontally imposed increase in real wage rates (the result of keeping money wage rates constant while selling prices fall). The relevant diagram is shown in Figure 81. The facts depicted in this diagram are the same as in the previous diagram: unions causing unemployment (EH) by insisting on an excessively high money (and therefore real) wage (0B). 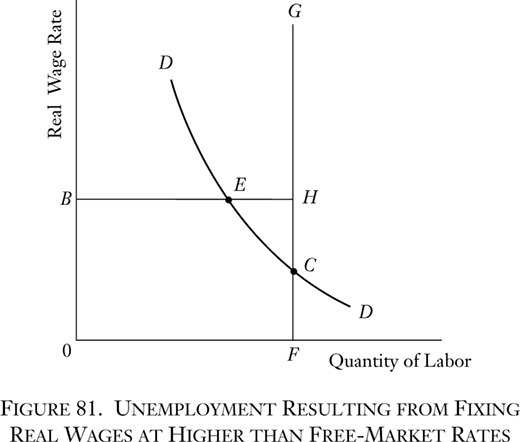 The sum and substance of the “Keynesian Revolution” was the thesis that there can be an unemployment equilibrium on the free market. As we have seen, the only sense in which this is true was known years before Keynes: that widespread union maintenance of excessively high wage rates will cause unemployment.

Keynes believed that while other elements of the economic system, including prices, were set basically in real terms, workers bargained even ultimately only in terms of money wages—that unions insisted on minimum money wage rates downward, but would passively accept falling real wages in the form of rising prices, money wage rates remaining the same. The Keynesian prescription for eliminating unemployment therefore rests specifically on the “money illusion”—that unions will impose minimum money wage rates, but are too stupid to impose minimum real wage rates per se. Unions, however, have learned about purchasing-power problems and the distinction between money and real rates; indeed, it hardly requires much reasoning ability to grasp this distinction.15 Ironically, Keynes’ advocacy of inflation based on the “money illusion” rested on the historical experience (which we shall treat more fully below) that, during an inflation, selling prices rise faster than wage rates. Yet an economy in which unions impose minimum wage rates is precisely an economy in which unions will be alive to any losses in their real, as well as their money, wages. Inflation, therefore, cannot be used as a means of duping unions into relieving unemployment.16 Keynesianism has been touted as at least a “practical” system. Whatever its theoretical defects, it is alleged to be fit for the modern world of unionism. Yet it is precisely in the modern world that Keynes’ doctrine is least appropriate or practical.17

The Keynesians object that to allow rigid money wage rates to become flexible downward would further lower monetary demand for goods, and therefore monetary income. But this completely confuses wage rates with aggregate payroll, or total income going to wages.18 That the former falls does not mean that the latter falls. On the contrary, total income is, as we have seen, determined by total expenditures in the previous period of time. Lower wage rates will cause the hiring of those made unemployed by the old excessively high wage rates. The fact that labor is now cheaper relatively to land factors will cause investors to expend a greater proportion on labor visà-vis land than before. And the employment of unemployed labor increases production and therefore aggregate real income. Furthermore, even if payrolls also decline, prices and wage rates can adjust—but this will be taken up in the next section on liquidity preference.