7. Production: General Pricing of the... > 2. Determination of the Discounted... > B. The Marginal Physical Product 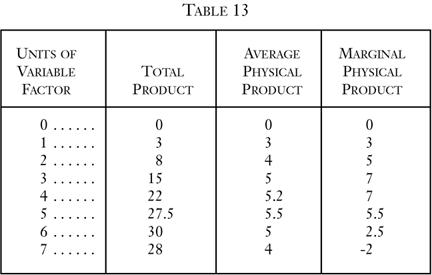 In the tabulation, we follow the law of returns, in that the APP, beginning, of course, at zero with zero units of the factor, rises to a peak and then falls. We also observe the following from our chart: (1) when the APP is rising (with the exception of the very first step where T P, APP, and MPP are all equal) MPP is higher than APP; (2) when the APP is falling, MPP is lower than APP; (3) at the point of maximum APP, MPP is equal to APP. We shall now prove, algebraically, that these three laws always hold.7

Now the new APP might be higher or lower than the previous one. Let us suppose that the new APP is higher and that therefore we are in a region where the APP is increasing. This means that: 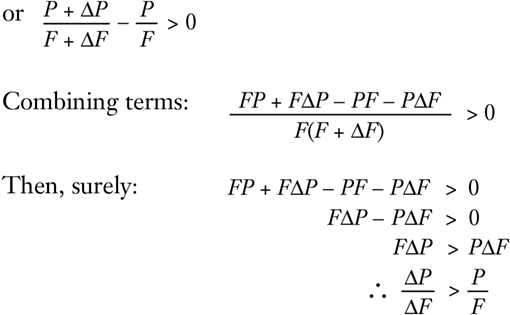 Thus, the MPP is greater than the old APP. Since it is greater, this means that there exists a positive number k such that:

Now there is an algebraic rule according to which, if:

Since k is positive,

In short, the MPP is also greater than the new APP.

The diagram in Figure 59 depicts a typical set of MPP and APP schedules. It shows the various relationships between APP and MPP. Both curves begin from zero and are identical very close to their origin. The APP curve rises until it reaches a peak at B, then declines. The MPP curve rises faster, so that it is higher than APP, reaches its peak earlier at C, then declines until it intersects with APP at B. From then on, the MPP curve declines faster than APP, until finally it crosses the horizontal axis and becomes negative at some point A. No firm will operate beyond the 0A area. 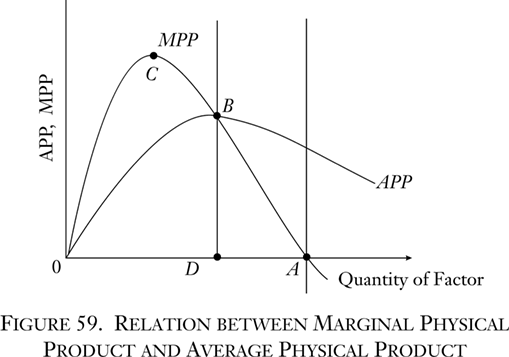 Now let us explore further the area of increasing APP, between 0 and D. Let us take another hypothetical tabulation (Table 14), which will be simpler for our purpose. 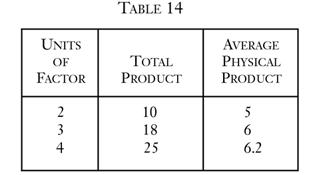 Neither will the producer set the factor so that its MPP is at the points B or A. Indeed, the variable factor will be set so that it has zero marginal productivity (at A) only if it is a free good. There is however, no such thing as a free good; there is only a condition of human welfare not subject to action, and therefore not an element in productivity schedules. Conversely, the APP is at B, its maximum for the variable factor, only when the other factors are free goods and therefore have zero marginal productivity at this point. Only if all the other factors were free and could be left out of account could the producer simply concentrate on maximizing the productivity of one factor alone. However, there can be no production with only one factor, as we saw in chapter 1.

The conclusion, therefore, is inescapable. A factor will always be employed in a production process in such a way that it is in a region of declining APP and declining but positive MPP— between points D and A on the chart. In every production process, therefore, every factor will be employed in a region of diminishing MPP and diminishing APP so that additional units of the factor employed in the process will lower the MPP, and decreased units will raise it.