4. Prices and Consumption > 5. The Marginal Utility of Money

B. The Money Regression

It is obvious that this vitally important problem of circularity (X depends on Y, while Y depends on X) exists not only in regard to decisions by consumers but also in regard to any exchange decision in the money economy. Thus, let us consider the seller of the stock of a consumers’ good. At a given offered money price, he must decide whether to sell the units of his stock or whether to hold on to them. His eagerness to sell in exchange for acquiring money is due to the use that the money would have for him. The money would be employed in its most important uses for him, and this will determine his evaluation of the money—or its marginal utility of addition. But the marginal utility of addition of money to the seller of the stock is based on its already being money and its ready command of other goods that the seller will buy—consumers’ goods and factors of production alike. The seller's marginal utility therefore also depends on the previous existence of money prices for the various goods in the economy.

This time component is purely on the money side of the determining factors. In a society of barter, there is no time component in the prices of any given day. When horses are being exchanged against fish, the individuals in the market decide on the relative marginal utilities solely on the basis of the direct uses of the commodities. These direct uses are immediate and do not require any previously existing prices on the market. Therefore, the marginal utilities of direct goods, such as horses and fish, have no previous time components. And, therefore, there is no problem of circularity in a system of barter. In such a society, if all previous markets and knowledge of previous prices were somehow wiped out, there would, of course, be an initial period of confusion while each individual consulted his value scales and tried to estimate those of others, but there would be no great difficulty in speedily re-establishing the exchange markets. The case is different in a monetary economy. Since the marginal utility of the money commodity depends on previously existing money prices, a wiping out of existing markets and knowledge of money prices would render impossible the direct re-establishment of a money economy. The economy would be wrecked and thrown back into a highly primitive state of barter, after which a money economy could only slowly be re-established as it had been before.

Now the question may be raised: Granted that there is no circularity in the determination of money prices, does not the fact that the causes partially regress backward in time simply push the unexplained components back further without end? If today's prices are partly determined by yesterday's prices, and yesterday's by those of the day before yesterday, etc., is not the regression simply pushed back infinitely, and part of the determination of prices thus left unexplained?

The determination of money prices (gold prices) is therefore completely explained, with no circularity and no infinite regression. The demand for gold enters into every gold price, and today's demand for gold, in so far as it is for use as a medium of exchange, has a time component, being based on yesterday's array of gold prices. This time component regresses until the last day of barter, the day before gold began to be used as a medium of exchange. On that day, gold had no utility in that use; the demand for gold was solely for direct use, and consequently, the determination of the gold prices, for that day and for all previous days, had no temporal component whatever.20,21

The causal-temporal pattern of the regression may be portrayed as in the diagram in Figure 38. Consecutive days are numbered 1, 2, 3, etc., and, for each period, arrows depict the underlying causal factors determining the gold prices of goods on the market. For each period of time, the gold prices of goods are fundamentally determined by the relative marginal utilities of gold and other goods on individual value scales, and the marginal utilities of gold are based on the gold prices during the preceding period. This temporal component, depicted by an arrow, continues backward until the period of barter, when gold is used only for direct consumption or production purposes and not as a medium of exchange. At that point there is no temporal dependence on preceding gold prices, and the temporal arrow disappears. In this diagram, a system of barter prevails on days 1, 2, and 3, and gold is used as a medium of exchange on day 4 and thereafter. 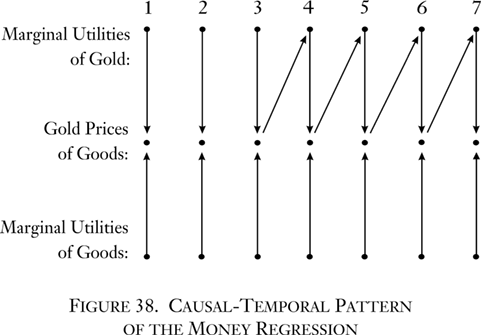 One of the important achievements of the regression theory is its establishment of the fact that money must arise in the manner described in chapter 3, i.e., it must develop out of a commodity already in demand for direct use, the commodity then being used as a more and more general medium of exchange.

Demand for a good as a medium of exchange must be predicated on a previously existing array of prices in terms of other goods. A medium of exchange can therefore originate only according to our previous description and the foregoing diagram; it can arise only out of a commodity previously used directly in a barter situation, and therefore having had an array of prices in terms of other goods. Money must develop out of a commodity with a previously existing purchasing power, such as gold and silver had. It cannot be created out of thin air by any sudden “social compact” or edict of government.

On the other hand, it does not follow from this analysis that if an extant money were to lose its direct uses, it could no longer be used as money. Thus, if gold, after being established as money, were suddenly to lose its value in ornaments or industrial uses, it would not necessarily lose its character as a money. Once a medium of exchange has been established as a money, money prices continue to be set. If on day X gold loses its direct uses, there will still be previously existing money prices that had been established on day X – 1, and these prices form the basis for the marginal utility of gold on day X. Similarly, the money prices thereby determined on day X form the basis for the marginal utility of money on day X + 1. From X on, gold could be demanded for its exchange value alone, and not at all for its direct use. Therefore, while it is absolutely necessary that a money originate as a commodity with direct uses, it is not absolutely necessary that the direct uses continue after the money has been established.

The money prices of consumers’ goods have now been completely explained in terms of individual value scales, and these value scales have been explained up to the point of the content of the subjective use-valuations of each good. Economics is not concerned with the specific content of these ends, but with the explanation of various phenomena of action based on any given ends, and therefore its task in this sphere is fully accomplished by tracing these phenomena back to subjective valuations of useful goods.22