Taxation, as we have seen, takes from producers and gives to others. Any increase in taxation swells the resources, the incomes, and usually the numbers of those living off the producers, while diminishing the production base from which these others are drawing their sustenance. Clearly, this is eventually a self-defeating process: there is a limit beyond which the top-heavy burden can no longer be carried by the diminishing stock of producers. Narrower limits are also imposed by the disincentive effects of taxation. The greater the amount of taxes imposed on the producers—the taxpayers—the lower the marginal utility of work will be, for the returns from work are forcibly diminished, and the greater the marginal utility of leisure forgone. Not only that: the greater will be the incentive to shift from the ranks of the burdened taxpayers to the ranks of the tax-consumers, either as full-time bureaucrats or as those subsidized by the government. As a result, production will diminish even further, as people retreat to leisure or scramble harder to join the ranks of the privileged tax-consumers.34 In the market economy, net incomes are derived from wages, interest, ground rents, and profit; and in so far as taxes strike at the earnings from these sources, attempts to earn these incomes will diminish. The laborer, faced with a tax on his wages, has less incentive to work hard; the capitalist, confronting a tax on his interest or profit return, has more incentive to consume rather than to save and invest. The landlord, a tax being imposed on his rents, will have less of a spur to allocate land sites efficiently.

It has been objected that since a man's marginal utility of money assets increases as he holds less of a stock of money, lower money income will mean an increased marginal utility of income. As a result, a tax on money incomes creates both a “substitution effect” against work and in favor of leisure (or against saving in favor of consumption) and an “income effect” working in the opposite direction. This is true, and in rare empirical cases, the latter effect will predominate. In plain language, this means that when extra penalties are placed upon man's efforts he will generally slacken them; but in some cases, he will work harder to try to offset the burdens. In the latter cases, however, we must remember that he will lose the valuable consumption good of “leisure”; he will have less leisure now than he would have if his choices were still free. Working harder under penalty is only a cause for rejoicing if we regard the matter exclusively from the point of view of those living off the producers, who will thereby benefit from the tax. The standard of living of the workers, which must include leisure, has fallen.

The income tax, by taxing income from investments, cripples saving and investment, since it lowers the return from investing below what free-market time preferences would dictate. The lower net interest return leads people to bring their savings-investment into line with the new realities; in short, the marginal savings and investments at the higher return will now be valued below consumption and will no longer be made. 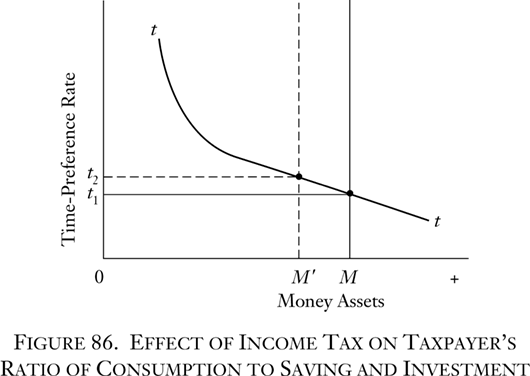 There is another, unheralded reason why an income tax will particularly penalize saving and investment as against consumption. It might be thought that since the income tax confiscates a certain portion of a man's income and leaves him free to allocate the rest between consumption and investment, and since time preference schedules remain given, the proportion of consumption to saving will remain unchanged. But this ignores the fact that the taxpayer's real income and the real value of his monetary assets have been lowered by paying the tax. We have seen in chapter 6 that, given a man's time-preference schedule, the lower the level of his real monetary assets, the higher his time-preference rate will be, and therefore the higher the proportion of his consumption to investment. The taxpayer's position may be seen in Figure 86, which is essentially the reverse of the individual time-market diagrams in chapter 6. In the present case, money assets are increasing as we go rightward on the horizontal axis, while in chapter 6 money assets were declining. Let us say that the taxpayer's initial position is a money stock of 0M; tt is his given time-preference curve. His effective time-preference rate, determining his consumption/investment proportion, is t1. Now, suppose that the government levies an income tax, reducing his initial monetary assets at the start of his spending period to 0M′. His effective time-preference rate, the intersection of tt and the M′ line, is now higher at t2. He shifts to a higher proportion of consumption and a lower proportion of saving and investment.35

We have now seen two reasons why an income tax will shift the social proportion toward more consumption and less saving and investment. It might be objected that the time-preference reason is invalid, since the government officials and the people they subsidize will receive the tax revenues and find that their money stock has increased just as that of the taxpayers has declined. We shall see below, however, that no truly productive savings and investments can be made by government, its employees, or the recipients of its subsidies.

Some economists maintain that income taxation reduces savings and investment in society in yet a third way. They assert that income taxation, by its very nature, imposes a “double” tax on savings-investment as against consumption.36 The reasoning runs as follows: Saving and consumption are really not symmetrical. All saving is directed toward enjoying more consumption in the future; otherwise, there would be no point at all to saving. Saving is abstaining from possible present consumption in return for the expectation of increased consumption at some time in the future. No one wants capital goods for their own sake. They are only the embodiment of increased consumption in the future. Saving-investment is Crusoe's building the stick to obtain more apples at a future date; it fructifies in higher consumption later. Hence, the imposition of an income tax is a “double” tax on consumption, and excessively penalizes saving and investment.37

This line of reasoning correctly explains the investment-consumption process. It suffers, however, from a grave defect: it is irrelevant to problems of taxation. It is true that saving is a fructifying agent. But the point is that everyone knows this; that is precisely why people save. Yet, even though they know that saving is a fructifying agent, they do not save all their income. Why? Because of their time preferences for present consumption. Every individual, given his current income and value scales, allocates that income in the most desirable proportions between consumption, investment, and additions to his cash balance. Any other allocation would satisfy his desires less well and lower his position on his value scale. The fructifying power of saving is already taken into account when he makes his allocation. There is therefore no reason to say that an income tax doubly penalizes saving-investment; it penalizes the individual's entire standard of living, encompassing present consumption, future consumption, and his cash balance. It does not per se penalize saving any more than the other avenues of income allocation.

This Fisher argument reflects a curious tendency among economists devoted to the free market to be far more concerned about governmental measures penalizing saving and investment than they are about measures hobbling consumption. Surely an economist favoring the free market must grant that the market's voluntary consumption/investment allocations are optimal and that any government interference in this proportion, from either direction, is distortive of that market and of production to meet the wants of the consumers. There is nothing, after all, particularly sacred about savings; they are simply the road to future consumption. But they are, then, clearly no more important than present consumption, the allocations between the two being determined by the time preferences of all individuals. The economist who balks more at interference with free-market savings than he does at infringement on free-market consumption is therefore implicitly advocating statist interference in the opposite direction. He is implicitly calling for a coerced distortion of resources to lower consumption and increase investment.38