11. Money and Its Purchasing Power > 17. Further Fallacies of the Keynesian System

B. The "Consumption Function" 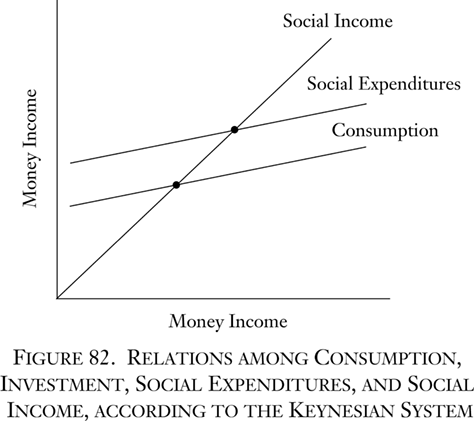 The stability of the passive consumption function, as contrasted with the volatility of active investment, is a keystone of the Keynesian system. This assumption is replete with so many grave errors that it is necessary to take them up one at a time.

(a) How do the Keynesians justify the assumption of a stable consumption function with the shape as shown above? One route was through “budget studies”—cross-sectional studies of the relation between family income and expenditure by income groups in a given year. Budget studies such as that of the National Resources Committee in the mid-1930's yielded similar “consumption functions” with dishoardings increasing below a certain point, and hoardings above it (i.e., income below expenditures below a certain point, and expenditures below income above it).

This is supposed to intimate that those doing the “dissaving,” i.e., the dishoarding, are poor people below the subsistence level who incur deficits by borrowing. But how long is this supposed to go on? How can there be a continuous deficit? Who would continue to lend these people the money? It is more reasonable to suppose that the dishoarders are decumulating their previously accumulated capital, i.e., that they are wealthy people whose businesses suffered losses during that year.

(c) Another very popular device to confirm the consumption function reached the peak of its popularity during World War II. This was historical-statistical correlation of national income and consumption for a definite period of time, usually the 1930's. This correlation equation was then assumed to be the “stable” consumption function. Errors in this procedure were numerous. In the first place, even assuming such a stable relation, it would only be an historical conclusion, not a theoretical law. In physics, an experimentally determined law may be assumed to be constant for other identical situations; in human action, historical situations are never the same, and therefore there are no quantitative constants! Conditions and valuations could change at any time, and the “stable” relationship altered. There is here no proof of a stable consumption function. The dismal record of forecasts (such as those of postwar unemployment) made on this assumption should not have been surprising.

Moreover, a stable relation was not even established. Income was correlated with consumption and with investment. Since consumption is a much larger magnitude than (net) investment, no wonder that its percentage deviations around the regression equation were smaller! Furthermore, income is here being correlated with 80–90 percent of itself; naturally, the “stability” is tremendous. If income were correlated with saving, of similar magnitude as investment, there would be no greater stability in the income-saving function than in the “income-investment function.”

Thirdly, the consumption function is necessarily an ex ante relation; it is supposed to tell how much consumers will decide to spend given a certain total income. Historical statistics, on the other hand, record only ex post data, which give a completely different story. For any given period of time, for example, hoarding and dishoarding cannot be recorded ex post. In fact, ex post, on double-entry accounting records, total social income is always equal to total social expenditures. Yet, in the dynamic, ex ante, sense, it is precisely the divergence between total social income and total social expenditures (hoarding or dishoarding) that plays the crucial role in the Keynesian theory. But these divergences can never be revealed, as Keynesians believe, by study of ex post data. Ex post, in fact, saving always equals investment, and social expenditure always equals social income, so that the ex post expenditure line coincides with the income line.71

(d) Actually, the whole idea of stable consumption functions has now been discredited, although many Keynesians do not fully realize this fact.72 In fact, Keynesians themselves have admitted that, in the long run, the consumption function is not stable, since total consumption rises as income rises; and that in the short run it is not stable, since it is affected by all sorts of changing factors. But if it is not stable in the short run and not stable in the long run, what kind of stability does it have? Of what use is it? We have seen that the only really important runs are the immediate and the long-run, which shows the direction in which the immediate is tending. There is no use for some sort of separate “intermediate” situation.

(e) it is instructive to turn now to the reasons that Keynes himself, in contrast to his followers, gave for assuming his stable consumption function. It is a confused exposition indeed.73 The “propensity to consume” out of given income, according to Keynes, is determined by two sets of factors, “objective” and “subjective.” It seems clear, however, that these are purely subjective decisions, so that there can be no separate objective determinants. In classifying subjective factors, Keynes makes the mistake of subsuming hoarding and investing motivations under categories of separate “causes”: precaution, foresight, improvement, etc. Actually, as we have seen, the demand for money is ultimately determined by each individual for all sorts of reasons, but all tied up with uncertainty; motives for investment are to maintain and increase future standards of living. By a sleight of hand completely unsupported by facts or argument Keynes simply assumes all these subjective factors to be given in the short run, although he admits that they will change in the long run. (If they change in the long run, how can his system yield an equilibrium position?) He simply reduces the subjective motives to current economic organization, customs, standards of living, etc., and assumes them to be given.74 The “objective factors” (which in reality are subjective, such as time-preference changes, expectations, etc.) can admittedly cause short-run changes in the consumption function (such as windfall changes in capital values). Expectations of future changes in income can affect an individual's consumption, but Keynes simply asserts without discussion that this factor “is likely to average out for the community as a whole.” Time preferences are discussed in a very confused way, with interest rate and time preference assumed to be apart from and influencing the propensity to consume. Here again, short-run fluctuations are assumed to have little effect, and Keynes simply leaps to the conclusion that the propensity to consume is, in the short run, a “fairly” stable function.75

(f) The failure of the consumption-function theory is not only the failure of a specific theory. It is a profound epistemological failure as well. For the concept of a consumption function has no place in economics at all. Economics is praxeological, i.e., its propositions are absolutely true given the existence of the axioms—the basic axiom being the existence of human action itself. Economics, therefore, is not and cannot be “empirical” in the positivist sense, i.e., it cannot establish some sort of empirical hypothesis which could or could not be true, and at best is only true approximately. Quantitative, empiricohistorical “laws” are worthless in economics, since they may only be coincidences of complex facts, and not isolable, repeat-able laws which will hold true in the future. The idea of the consumption function is not only wrong on many counts; it is irrelevant to economics.

Furthermore, the very term “function” is inappropriate in a study of human action. Function implies a quantitative, determined relationship, whereas no such quantitative determinism exists. People act and can change their actions at any time; no causal, constant, external determinants of action can exist. The term “function” is appropriate only to the unmotivated, repeat-able motion of inorganic matter.

In conclusion, there is no reason whatever to assume that at some point, expenditures will be below income, while at lower points it will be above income. Economics does not and cannot know what ex ante expenditure will ever be in relation to income; at any point, it could be equal, or there could be net hoarding or dishoarding. The ultimate decisions are made by the individuals and are not determinable by science. There is, therefore, no stable expenditure function whatever.