11. Money and Its Purchasing Power > 6. The Supply of Money

C. Money-Substitutes and the Supply of Money

The relation between these elements may be illustrated as follows: Assume a community of three persons, A, B, C, and three money warehouses, X, Y, Z. Suppose that each person has 100 ounces of gold in his possession and none on deposit at a warehouse. For the community, then:

Now assume that A and B each deposits his 100 ounces of gold at warehouses X and Y respectively, while C keeps his gold on hand. The total supply of money is always equal to the total of individual cash balances. Its composition now is:

The effect of the deposit of money proper in the warehouses or banks is to change the composition of the total supply of money in cash balances; the total amount, however, remains unchanged at 300 ounces. Money-substitutes of various banks have replaced most of the standard money in individual cash holdings. Similarly, if A and B were to redeem their deposits, the total amount would remain unchanged, while the composition would revert to the original pattern.

What of the 200 ounces of gold deposited in the vaults of the banks? These are no longer part of the money supply; they are held in reserve against the outstanding money-substitutes. While in reserve, they form no part of any individual's cash balance; the cash balances consist not of the gold, but of evidences of ownership of the gold. Only the money proper outside of bank reserves forms part of individuals’ cash balances and hence part of the community's supply of money.

Thus, as long as all money-substitutes are full money certificates, an increase or decrease in the money-substitutes outstanding can have no effect on the total supply of money. Only the composition of that supply is affected, and such changes in composition are of no economic importance.

In the meanwhile, however, let us analyze a little further the difference between a 100-percent-reserve and a fractional-reserve bank. The Star Bank, let us suppose, is a 100-percent-reserve bank; it is established with 100 gold ounces of capital invested by its stockholders in building and equipment. In the familiar balance sheet, with assets on the left-hand side and liabilities and capital on the right-hand side, the condition of the bank now appears as follows:

The Star Bank is ready to begin operations. Several people now come and deposit gold in the bank, which in return issues warehouse receipts giving the depositors (the true owners of the gold) the right to redeem their property on demand at any time. Let us assume that after a few months 5,000 gold ounces have been deposited and stored in the bank's vaults. Its balance sheet now appears as follows: 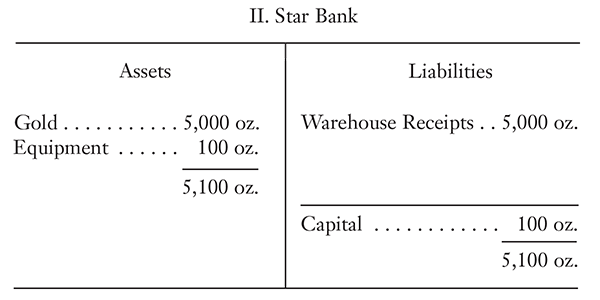 The warehouse receipts function and exchange as money-substitutes, replacing, not adding to, the gold stored in the bank. All the warehouse receipts are money certificates, 100-percent reserve has been maintained, and no invasion of the free market has occurred. The warehouse receipts may take the form of printed tickets (notes) or book credit (demand deposits) transferable by written order or “check.” The two are economically identical.

But now suppose that law enforcement is lax and the bank sees that it can make money easily by engaging in fraud, i.e., by lending some of the depositors’ gold (or, rather, issuing pseudo warehouse receipts for nonexistent gold and lending them) to people who wish to borrow it.32 Let us say that the Star Bank, chafing at the mere interest return earned on its fees for warehouse service, prints 1,000 ounces of pseudo warehouse receipts and lends them on the credit market to businesses and consumers who desire to borrow money. The balance sheet of the Star Bank is now as follows: 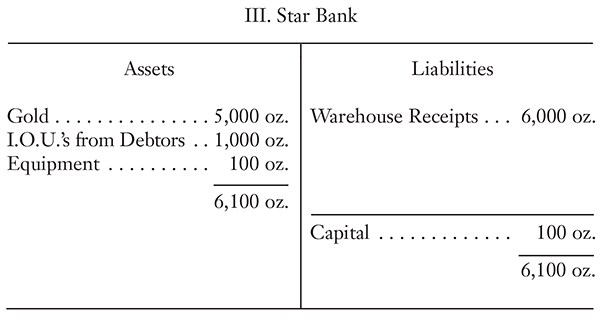 The warehouse receipts still function as money-substitutes on the market. And we see that new money has been created by the bank out of thin air, as if by magic. This process of money creation has also been called the “monetization of debt,” an apt term since it describes the only instance where a liability can be transformed into money—the supreme asset. It is obvious that the more money the bank creates, the more profits it will earn, for any income earned on newly created money is a pure unalloyed gain. The bank has been able to alter the conditions of the free market system, in which money can be obtained only by purchase, mining, or gift. In each of these routes, productive service—either one's own or one's ancestor's or benefactor's—was necessary in order to obtain money. The bank's inflationary intervention has created another route to money: the creation of new money out of thin air, by issuing receipts for nonexistent gold.33,34