11. Money and Its Purchasing Power > 5. The Demand for Money

One of the most obvious influences on the demand for money is expectation of future changes in the exchange-value of money. Thus, suppose that, at a certain point in the future, the PPM of money is expected to drop rapidly. How the demand-for-money schedule now reacts depends on the number of people who hold this expectation and the strength with which they hold it. It also depends on the distance in the future at which the change is expected to take place. The further away in time any economic event, the more its impact will be discounted in the present by the interest rate. Whatever the degree of impact, however, an expected future fall in the PPM will tend to lower the PPM now. For an expected fall in the PPM means that present units of money are worth more than they will be in the future, in which case there will be a fall in the demand-for-money schedule as people tend to spend more money now than at the future date. A general expectation of an imminent fall in the PPM will lower the demand schedule for money now and thus tend to bring about the fall at the present moment.

An expected fall in the PPM in the future will therefore lower the PPM now, and an expected rise will lead to a rise now. The speculative demand for money functions in the same manner as the speculative demand for any good. An anticipation of a future point speeds the adjustment of the economy toward that future point. Just as the speculative demand for a good speeded adjustment to an equilibrium position, so the anticipation of a change in the PPM speeds the market adjustment toward that position. Just as in the case of any good, furthermore, errors in this speculative anticipation are “self-correcting.” Many writers believe that in the case of money there is no such self-correction. They assert that while there may be a “real” or underlying demand for goods, money is not consumed and therefore has no such underlying demand. The PPM and the demand for money, they declare, can be explained only as a perpetual and rather meaningless cat-and-mouse race in which everyone is simply trying to anticipate everyone else's anticipations.

There is, however, a “real” or underlying demand for money. Money may not be physically consumed, but it is used, and therefore it has utility in a cash balance. Such utility amounts to more than speculation on a rise in the PPM. This is demonstrated by the fact that people do hold cash even when they anticipate a fall in the PPM. Such holdings may be reduced, but they still exist, and as we have seen, this must be so in an uncertain world. In fact, without willingness to hold cash, there could be no monetary-exchange economy whatever.

The speculative demand therefore anticipates the underlying nonspeculative demands, whatever their source or inspiration. Suppose, then, that there is a general anticipation of a rise in the PPM (a fall in prices) not reflected in underlying supply and demand. It is true that, at first, this general anticipation raises, ceteris paribus, the demand for money and the PPM. But this situation does not last. For now that a pseudo “equilibrium” has been reached, the speculative anticipators, who did not “really” have an increased demand for money, sell their money (buy goods) to reap their gains. But this means that the underlying demand comes to the fore, and this is less than the money stock at that PPM. The pressure of spending then lowers the PPM again to the true equilibrium point. This may be diagramed as in Figure 77. 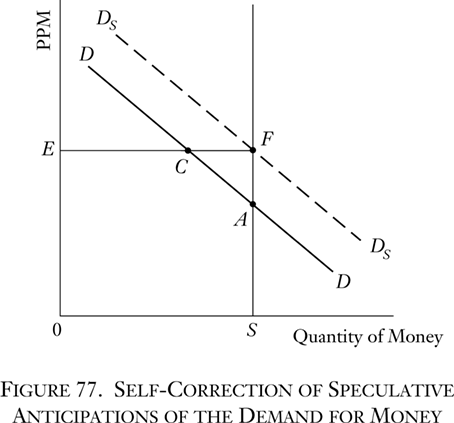 Money stock is 0S; the true or underlying money demand is DD, with true equilibrium point at A. Now suppose that the people on the market erroneously anticipate that true demand will be such in the near future that the PPM will be raised to 0E. The total demand curve for money then shifts to DsDs, the new total demand curve including the speculative demand. The PPM does shift to 0E as predicted. But now the speculators move to cash in their gain, since their true demand for money really reflects DD rather than DsDs. At the new price 0E, there is in fact an excess of money stock over quantity demanded, amounting to CF. Sellers rush to sell their stock of money and buy goods, and the PPM falls again to equilibrium. Hence, in the field of money as well as in that of specific goods, speculative anticipations are self-correcting, not “self-fulfilling.” They speed the market process of adjustment.