10. Monopoly and Competition > 3. The Illusion of Monopoly Price

B. The Neoclassical Theory of Monopoly Prices

In previous sections36 we have refereed to a monopoly price as one established either by a monopolist or by a cartel of producers. At this point we must investigate the theory more closely. A succinct definition of monopoly price has been supplied by Mises:

If conditions are such that the monopolist can secure higher net proceeds by selling a smaller quantity of his product at a higher price than by selling a greater quantity of his supply at a lower price, there emerges a monopoly price higher than the potential market price would have been in the absence of monopoly.37

The monopoly price doctrine may be summed up as follows: A certain quantity of a good, when produced and sold, yields a competitive price on the market. A monopolist or a cartel of firms can, if the demand curve is inelastic at the competitive-price point, restrict sales and raise the price, to arrive at the point of maximum returns. If, on the other hand, the demand curve as it presents itself to the monopolist or cartel is elastic at the competitive-price point, the monopolist will not restrict sales to attain a higher price. As a result, as Mises points out, there is no need to be concerned with the “monopolist” (in the sense of definition 1 above); whether or not he is the sole producer of a commodity is unimportant and irrelevant for catallactic problems. It becomes important only if the configuration of his demand curve enables him to restrict sales and achieve a higher income at a monopoly price.38 If he learns about the inelastic demand curve after he has erroneously produced too great a stock, he must destroy or withhold part of his stock; after that, he restricts production of the commodity to the most remunerative level.

The monopoly price analysis is portrayed in the diagram in Figure 67. The basic assumption, usually only implicit, is that there is some identifiable stock, say 0A, and some identifiable market price, say, AC, which will result from competitive conditions then represents the stock line under “competition.” Then, according to the theory, if the demand curve is elastic above this price, there will be no occasion to restrict sales and obtain a higher, or “monopoly,” price. Such a demand curve is DD. On the other hand, if the demand curve is inelastic above the competitive-price point, as in D′D′, it will pay the monopolist to restrict sales to, say, 0A′(stock line represented by A′B′ ) and achieve a monopoly price, A′M. This would yield the maximum monetary income for the monopolist.39 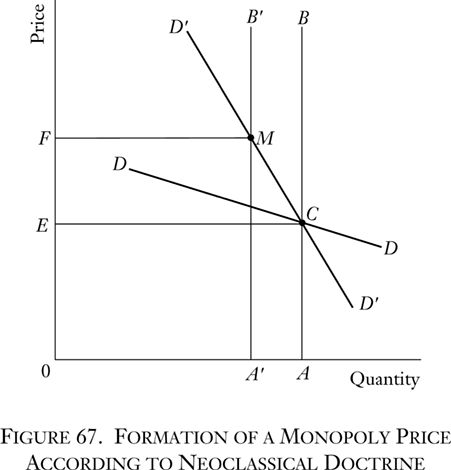 The inelastic demand curve, giving rise to an opportunity to monopolize, may present itself either to a single monopolist of a given product or to “an industry as a whole” when organized into a cartel of the different producers. In the latter case, the demand curve, as it presents itself to each firm, is elastic. At the competitive price, if one firm raises its price, the customers preponderantly shift to purchasing from its competitors. On the other hand, if the firms are cartelized, in many cases the lesser range of substitution by consumers would render the demand curve, as presented to the cartel, inelastic. This condition serves as the impetus to the formation of the cartels studied above.