10. Monopoly and Competition > 2. Cartels and Their Consequences

C. Economics, Technology, and the Size of the Firm

We do not know, and economics cannot tell us, the optimum size of a firm in any given industry. The optimum size depends on the concrete technological conditions of each situation, as well as on the state of consumer demand in relation to the given supply of various factors in this and in other industries. All these complex questions enter into the decisions of producers, and ultimately of consumers, concerning how large the firms in various lines of production will be. In line with consumer demand and with opportunity costs for the various factors, factor-owners and entrepreneurs will produce in those industries and firms in which they can maximize their monetary income or profit (other psychic factors being equal). Since forecasting is the function of entrepreneurs, successful entrepreneurs will minimize their errors and hence their losses as well. As a result, any existing situation on the free market will tend to be the most desirable for the satisfaction of consumers’ demands (including herein the non-monetary wishes of the producers).

Neither economists nor engineers can decide the most efficient size of a firm in any situation. Only the entrepreneurs themselves can determine what size of firm will operate most efficiently, and it is presumptuous and unwarranted for economists or for any other outside observers to attempt to dictate otherwise. In this and other matters, the wishes and demands of the consumers are “telegraphed” through the price system, and the resulting drive for maximum monetary income and profits will always tend to bring about the optimum allocation and pricing. There is no need for the external advice of economists.

It is clear that when several thousand individuals decide not to produce and own individual steel plants by themselves, but rather to pool their capital into an organized corporation—which will purchase factors, invest and direct production, and sell the product, later allocating the monetary gains among the owners—they are enormously increasing their efficiency. Compared to production in hundreds of tiny plants, the quantity of production per given factors will be greatly increased. The large firm will be able to purchase heavily capitalized machinery and to finance better organized marketing and distributing outlets. All this is quite clear when thousands of individuals pool their capital into the establishment of a steel firm. But why may it not be equally true when several small steel firms merge into one large company?

It might be replied that in the latter merger, particularly in the case of a cartel, joint action is taken, not to increase efficiency, but solely to increase income by restricting sales. Yet there is no way that an outside observer can distinguish between a “restrictive” and an efficiency-increasing operation. In the first place, we must not think of the plant or factory as being the only productive factors the efficiency of which can increase. Marketing, advertising, etc., are also factors of production; for “production” is not simply the physical transformation of a product, but also consists in transporting it and placing it into the hands of users. The latter implies the expenses of informing the user about the existence and nature of the product and of selling that product to him. Since a cartel always engages in joint marketing, who can deny that the cartel might render marketing more efficient? How, therefore, can this efficiency be separated from the “restrictive” aspect of the operation?8

Furthermore, technological factors in production can never be considered in a vacuum. Technological knowledge tells us of a whole host of alternatives that are open to us. But the crucial questions—in what to invest? how much? what production method to choose?—can be answered only by economic, i.e., by financial considerations. They can be answered only on a market actuated by a drive for money incomes and profits. Thus, how is a producer to decide, in digging a subway tunnel, what material to use in its construction? From a purely technological point of view, solid platinum may be the best choice, the most durable, etc. Does this mean that he should choose platinum? He can make a choice among factors, methods, goods to produce, etc., only by comparing the necessary monetary expenses (which are equal to the income the factors could earn elsewhere) with expected monetary income from the production. Only by maximizing monetary gain can factors be allocated in the service of consumers; otherwise, and on purely technological grounds, there would be nothing to prevent the building of platinum-lined subway tunnels the breadth of the continent. The only reason this cannot be done under present conditions is the heavy money “cost” caused by the waste of drawing away factors and resources from uses far more urgently demanded by the consumers. But the fact of this urgent alternative demand—and thus the fact of the waste—can be discovered only through being recorded by a price system actuated by a drive by producers for money incomes. Only empirical observation of the market reveals to us the full absurdity of such a transcontinental subway.

Moreover, there are no physical units with which we can compare the different types of physical factors and physical products. Thus, suppose a producer attempts to determine the most efficient use of two hours of his labor. In a romantic moment, he tries to determine this efficiency by purely abstracting from “sordid” considerations of monetary gain. Assume that he is confronted with three technologically known alternatives. These are tabulated as follows: 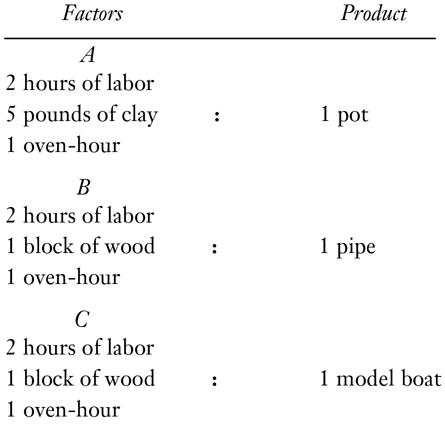 Which of these alternatives, A, B, or C, is the most efficient, the most technologically “useful,” way of allocating his labor? It is clear that the “idealistic,” self-sacrificing producer has no way of knowing! He has no rational way of deciding whether or not to produce the pot, the pipe, or the boat. Only the “selfish” money-seeking producer has a rational way of determining the allocation. In seeking maximum monetary gain, the producer compares the money costs (necessary expenses) of the various factors with the prices of the products. Considering A and B, for example, if the purchase of the clay and oven-hour would cost one gold ounce, and the pot could sell for two gold ounces, his labor would earn one gold ounce. On the other hand, if the wood and oven-hour would cost one and a half gold ounces, and the pipe could sell for four gold ounces, he would earn two and a half ounces for his two hours of labor and would choose to make this product. The prices of both the product and the factors are reflections of consumer demand and of producers’ attempts to earn money in its service. The only way the producer could determine which product to make is to compare expected monetary gains. If the boat would sell for five gold ounces, he would produce the boat rather than the pipe, and thus satisfy a more urgent consumer demand, as well as his own desire for monetary income.

There can therefore be no separation of technological efficiency from financial considerations. The only way that we can determine whether one product is more demanded than another, or one process more efficient than another, is through concrete actions of the free market. We may think it self-evident, for example, that the optimum efficient size of a steel plant is larger than that of a barber shop. But we know this not as economists from a priori or praxeological reasoning, but purely by empirical observation of the free market. There is no way that economists or any other outside observers can set the technological optimum for any plant or firm. This can be done only on the market itself. But if this is true in general, it is also true in the specific cases of mergers and cartels. The impossibility of isolating a technological element becomes even clearer when we remember that the critical problem is not the size of the plant, but the size of the firm. The two are by no means synonymous. It is true that the firm will consider the optimum-sized plant for whatever scale its operations will be on, and, further, that a larger-sized plant will, ceteris paribus, require a larger-sized firm. But its range of decisions cover a much broader ground: how much to invest, what good or goods to produce, etc. A firm may encompass one or more plants or products and always encompasses marketing facilities, financial organization, etc., which are overlooked when only the plant is held in view.9

These considerations, incidentally, serve to refute the very popular distinction between “production for use” and “production for profit.” In the first place, all production is for use; otherwise it would not take place. In the market economy, this almost always means goods for the use of others—the consumers. Profit can be earned only through servicing consumers with produced goods. On the other hand, there can be no rational production, above the most primitive level, based on technological or utilitarian considerations abstracted from monetary gain.10

It is important to realize what we have not said in this section. We have not said that cartels will always be more efficient than individual firms or that “big” firms will always be more efficient than small ones. Our conclusion is that economics can make few valid statements about the optimal size of a firm except that the free market will come as close as possible to rendering maximum service to consumers, whether we are considering the size of a firm or any other aspect of production. All the concrete problems in production—the size of the firm, the size of the industry, the location, price, size and nature of the output, etc.—are for entrepreneurs, not economists, to solve.

We should not leave the problem of the size of the firm without considering a common worry of economic writers: What if the average cost curve of a firm continues to fall indefinitely? Would not the firm then grow so big as to constitute a “monopoly”? There is much lamentation that competition “breaks down” in such a situation. Much of the emphasis on this problem comes, however, from preoccupation with the case of “pure competition,” which, as we shall see below, is an impossible figment. Secondly, it is obvious that no firm ever has been or can be infinitely large, so that limiting obstacles—rising or less rapidly falling costs—must enter somewhere, and relevantly, for every firm.11 Thirdly, if a firm, through greater efficiency, does obtain a “monopoly” in some sense in its industry, it clearly does so, in the case we are considering (falling average cost), by lowering prices and benefiting the consumers. And if (as all the theorists who attack “monopoly” agree) what is wrong with “monopoly” is precisely a restriction of production and a rise in price, there is obviously nothing wrong with a “monopoly” achieved by pursuing the directly opposite path.12