E. Vertical Integration and the Size of the Firm

In the free economy, there is an explicit time market, labor market, and land-rent market. It is clear that while chaos would ensue from a world of producers’ co-operatives, other critical points even before that would, as it were, introduce little bits of chaos into the productive system. Thus, suppose that workers are separated from capitalists, but that all capitalists own their own ground land. Further, suppose, that for one reason or another, no capitalist will be able to rent out his land to some other firm. In that case, land and a particular capital and production process are indissolubly wedded to each other. There would be no rational way to allocate land in production, since it would have no explicit price anywhere. Since producers would suffer heavy losses, the free market would never establish such a situation. For the free market always tends to conduct affairs so that entrepreneurs make the greatest profit through serving the consumer best and most efficiently. Since absence of calculation creates grave inefficiencies in the system, it also causes heavy losses. Such a situation (absence of calculation) would therefore never be established on a free market, particularly after an advanced economy has already developed calculation and a market.

Vertical integration, of course, lengthens the production period for any firm, i.e., it lengthens the time before the firm can recoup its investment in the production process. The interest return then covers the time for two or more stages rather than one.55 There is a more important question involved, however. This is the role of implicit earnings and calculation in a vertically integrated firm. Let us take the case of the integrated firm mentioned in Figure 65. 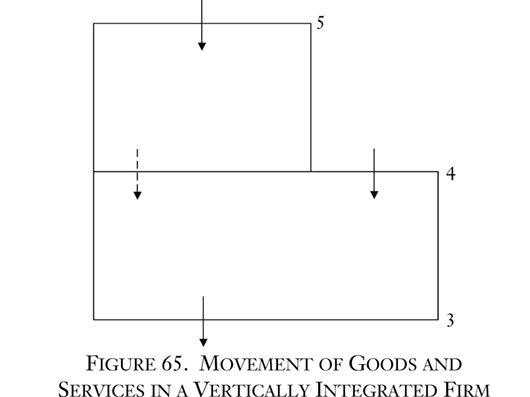 Figure 65 depicts a vertically integrated firm; the arrows represent the movement of goods and services (not of money). The firm buys labor and land factors at both the fifth and the fourth stages; it also makes the fourth-stage capital goods itself and uses them in another plant to make a lower-stage good. This movement internal to the firm is expressed by the dotted arrow.

Does such a firm employ calculation within itself, and if so, how? Yes. The firm assumes that it sells itself the fourth-rank capital good. It separates its net income as a producer of fourth-rank capital from its role as producer of third-rank capital. It calculates the net income for each separate division of its enterprise and allocates resources according to the profit or loss made in each division. It is able to make such an internal calculation only because it can refer to an existing explicit market price for the fourth-stage capital good. In other words, a firm can accurately estimate the profit or loss it makes in a stage of its enterprise only by finding out the implicit price of its internal product, and it can do this only if an external market price for that product is established elsewhere.

To illustrate, suppose that a firm is vertically integrated over two stages, with each stage covering one year's time. The general rate of interest in the economy tends towards 5 percent (per annum). This particular firm, say, the Jones Manufacturing Company, buys and sells its factors as shown in Figure 66. 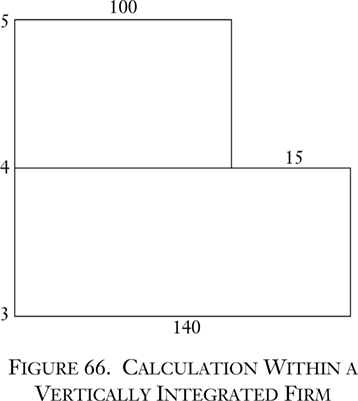 This vertically integrated firm buys factors at the fifth rank for 100 ounces and original factors at the fourth rank for 15 ounces; it sells the final product at 140 ounces. It seems that it has made a handsome entrepreneurial profit on its operations, but can it find out which stage or stages is making this profitable showing? If there is an external market for the product of the stage that the firm has vertically integrated (stage 4), the Jones Company is able to calculate the profitability of specific stages of its operations. Suppose, for example, that the price of the fourth-order capital good on the external market is 103 ounces. The Jones Company then estimates its implicit price for this intermediate product at what it would have brought on the market if it had been sold there. This price will be about 103 ounces.56 Assuming that the price is estimated at 103, then the total amount of money spent by Jones’ lower-order plant on factors is 15 (explicit, on original factors) plus 103 (implicit, on capital goods) for a total of 118.

Now the Jones Company can calculate the profits or losses made at each stage of its operations. The “higher” stage bought factors for 100 ounces and “sold” them at 103 ounces. It made a 3-percent return on its investment. The lower stage bought its factors for 118 ounces and sold the product for 140 ounces, making a 29-percent return. It is obvious that, instead of enjoying a general profitability, the Jones Company suffered a 2-percent entrepreneurial loss on its earlier stage and gained a 24-percent profit on its later stage. Knowing this, it will shift resources from the higher to the lower stage in accordance with their respective profitabilities—and therefore in accordance with the desires of consumers. Perhaps it will abandon its higher stage altogether, buying the capital good from an external firm and concentrating its resources in the more profitable lower stage.

On the other hand, suppose that there is no external market, i.e., that the Jones Company is the only producer of the intermediate good. In that case, it would have no way of knowing which stage was being conducted profitably and which not. It would therefore have no way of knowing how to allocate factors to the various stages. There would be no way for it to estimate any implicit price or opportunity cost for the capital good at that particular stage. Any estimate would be completely arbitrary and have no meaningful relation to economic conditions.

In short, if there were no market for a product, and all of its exchanges were internal, there would be no way for a firm or for anyone else to determine a price for the good. A firm can estimate an implicit price when an external market exists; but when a market is absent, the good can have no price, whether implicit or explicit. Any figure could be only an arbitrary symbol. Not being able to calculate a price, the firm could not rationally allocate factors and resources from one stage to another.

Since the free market always tends to establish the most efficient and profitable type of production (whether for type of good, method of production, allocation of factors, or size of firm), we must conclude that complete vertical integration for a capital-good product can never be established on the free market (above the primitive level). For every capital good, there must be a definite market in which firms buy and sell that good. It is obvious that this economic law sets a definite maximum to the relative size of any particular firm on the free market.57 Because of this law, firms cannot merge or cartelize for complete vertical integration of stages or products. Because of this law, there can never be One Big Cartel over the whole economy or mergers until One Big Firm owns all the productive assets in the economy. The force of this law multiplies as the area of the economy increases and as islands of noncalculable chaos swell to the proportions of masses and continents. As the area of incalculability increases, the degrees of irrationality, misallocation, loss, impoverishment, etc., become greater. Under one owner or one cartel for the whole productive system, there would be no possible areas of calculation at all, and therefore complete economic chaos would prevail.58

Economic calculation becomes ever more important as the market economy develops and progresses, as the stages and the complexities of type and variety of capital goods increase. Ever more important for the maintenance of an advanced economy, then, is the preservation of markets for all the capital and other producers’ goods.

Our analysis serves to expand the famous discussion of the possibility of economic calculation under socialism, launched by Professor Ludwig von Mises over 40 years ago.59 Mises, who has had the last as well as the first word in this debate, has demonstrated irrefutably that a socialist economic system cannot calculate, since it lacks a market, and hence lacks prices for producers’ and especially for capital goods.60 Now we see that, paradoxically, the reason why a socialist economy cannot calculate is not specifically because it is socialist! Socialism is that system in which the State forcibly seizes control of all the means of production in the economy. The reason for the impossibility of calculation under socialism is that one agent owns or directs the use of all the resources in the economy. It should be clear that it does not make any difference whether that one agent is the State or one private individual or private cartel. Whichever occurs, there is no possibility of calculation anywhere in the production structure, since production processes would be only internal and without markets. There could be no calculation, and therefore complete economic irrationality and chaos would prevail, whether the single owner is the State or private persons.

The difference between the State and the private case is that our economic law debars people from ever establishing such a system in a free-market society. Far lesser evils prevent entrepreneurs from establishing even islands of incalculability, let alone infinitely compounding such errors by eliminating calculability altogether. But the State does not and cannot follow such guides of profit and loss; its officials are not held back by fear of losses from setting up all-embracing cartels for one or more vertically integrated products. The State is free to embark upon socialism without considering such matters. While there is therefore no possibility of a one-firm economy or even a one-firm vertically integrated product, there is much danger in an attempt at socialism by the State. A further discussion of the State and State intervention will be found in chapter 12 of this book.

A curious legend has become quite popular among the writers on the socialist side of the debate over economic calculation. This runs as follows: Mises, in his original article, asserted “theoretically” that there could be no economic calculation under socialism; Barone proved mathematically that this is false and that calculation is possible; Hayek and Robbins conceded the validity of this proof but then asserted that calculation would not be “practical.” The inference is that the argument of Mises has been disposed of and that all socialism needs is a few practical devices (perhaps calculating machines) or economic advisers to permit calculation and the “counting of the equations.”

The false dichotomy disposed of, the true nature of the Barone “proof” becomes apparent. It is not so much “theoretical” as irrelevant. The proof-by-listing-of-mathematical-equa-tions is no proof at all. It applies, at best, only to the evenly rotating economy. Obviously, our whole discussion of the calculation problem applies to the real world and to it only. There can be no calculation problem in the ERE because no calculation there is necessary. Obviously, there is no need to calculate profits and losses when all future data are known from the beginning and where there are no profits and losses. In the ERE, the best allocation of resources proceeds automatically. For Barone to demonstrate that the calculation difficulty does not exist in the ERE is not a solution; it is simply a mathematical belaboring of the obvious.61 The difficulty of calculation applies to the real world only.62