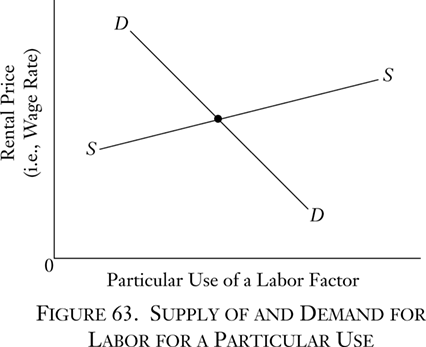 The general demand curve for a labor factor will also slope downward in the relevant area. One of the complications in the analysis of labor is the alleged occurrence of a “backward supply curve of labor.” This happens when workers react to higher wage rates by reducing their supply of labor hours, thus taking some of their higher incomes as increased leisure. This may very well occur, but it will not be relevant to the determination of the wages of a factor. In the first place, we saw that particular supply curves of a factor will be flat because of the competition of alternative uses. But even the general supply curve of a factor will be “forward-sloping,” i.e., rightward-sloping. For labor, though hardly homogeneous, is a peculiarly nonspecific factor. Therefore, higher wage rates for one set of factors will tend to stimulate other laborers to train themselves or bestir themselves to enter this particular “market.” Since skills differ, this does not mean that all wages will be equalized. It does mean, however, that general supply curves for a labor factor will also be forward-sloping. We might arrange an array of general supply and demand curves for various labor factors as in Figure 64. 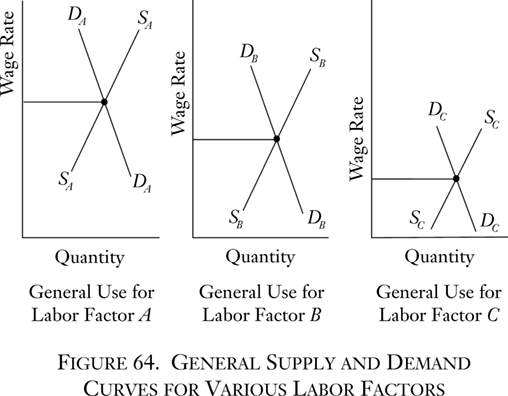 The only case in which a backward supply curve may occur is for the total supply of all labor factors, and here the elements are so imprecise, since these factors are not homogeneous, that diagrams are of little avail in analysis. Yet this is an important question. As wage rates in general rise, in all their connexity between various specific labor markets, the supply of all labor (i.e., the quantity of labor-hours) can either increase or decrease, depending on the value scales of the individuals concerned. Rising wages may draw nonworking people into the labor force and induce people to work overtime or to obtain an extra part-time job. On the other hand, it may lead to increased leisure and a falling off in total hours worked. Rising wages may lead to population growth, swelling the total supply of labor “in general,” or may lead to a cutback in population and the taking of some of the gains of increased wages in the form of increased leisure and an increased standard of living per person in the population.14 Changes in the total supply or stock of labor-in-general will affect the particular markets by shifting all the specific schedules to the left if the stock decreases, or to the right if it increases.

A backward supply curve might conceivably take place for a land factor as well, when the owner has a high reserve demand for the land in order to enjoy its unused (in the catallactic sense) beauty. In that case, the land would have an increasing marginal disutility of visual enjoyment forgone, just as leisure is forgone in the process of expending labor. In the case of land, since there is not as great a connexity between land factors as there is between nonspecific labor factors, this circumstance will, in fact, impinge more directly on the market rental price. It may be revealed in a backward general supply curve for the land factor. Higher rental prices offered for his land will then induce the landowner to withhold more of it, taking the higher income partially in nonexchangeable consumption goods as well as in more money received. These cases may be rare in practice, but only because of the freely chosen values of the individuals themselves.

Thus, there is no reason for the would-be preserver of a monument or of a park to complain about the way the market treats his treasured objects. In the free society, these conservationists are at perfect liberty to purchase the sites and preserve them intact. They would, in effect, be deriving consumption services from such acts of preservation.

To return to labor, we have mentioned another component in wage rates. This is the psychic income, or psychic disutility, involved in any particular line of work. People, in other words, are often attracted to a certain line of work or to a specific job by other considerations than the monetary income. There may be positive psychic benefits and satisfactions derived from the particular type of work or from the particular firm employing the worker. Similarly, psychic disutilities may be attached to particular jobs.

These psychic elements will enter into the curves for particular uses. In order to isolate such elements, let us suppose for the moment that all laborers are equally value-productive, that labor is a homogeneous factor. In such a world, all wage rates in all occupations would be equal. All industries need not be equally value-productive for this result to occur. For as a result of the connexity of labor, i.e., its nonspecificity, laborers can enter wide ranges of occupations. If we assume, as we do for the moment, that all laborers are equally value-productive, then they will enter a high-wage industry to push the particular supply curve of labor in that industry downward, while quitting workers raise the supply curve of labor in the low-wage industry.

This conclusion follows from the general tendency toward the uniformity of the price of any good on the market. If all labor were homogeneous and therefore one factor, its price (wage rate) would be uniform throughout industry, just as the pure interest rate tends to be uniform.

Now let us relax one of the conditions of our hypothetical construct.15 While retaining the assumption of equal productivity of all laborers, let us now introduce the possibility of psychic benefits or psychic disutilities accruing to workers at particular jobs. Some jobs are actively liked by most people, others actively disliked. These jobs may be common to certain industries or, more narrowly, to individual firms which may be considered particularly pleasant or unpleasant to work for. What will happen to money wage rates and to the supply of labor in the various occupations? It is obvious that, in the generally disliked occupation or firm, higher money wage rates will be necessary to attract and hold labor in that job. On the other hand, there will be so much labor competing in the generally liked jobs that they will pay lower wage rates. In other words, our amended conclusion is that not money wage rates, but psychic wage rates, will be equalized throughout—psychic wage rates being equal to money wage rates plus or minus a psychic benefit or psychic disutility component.

Many economists have assumed, implicitly or explicitly, an essential homogeneity among laborers. And they have made this assumption not, as we have done, as a purely temporary construct, but as an attempt to describe the real world. The question is an empirical one. It is a fundamental, empirically derived postulate of this book that there is a great variety among men in labor skills, in insight into future events, in ability, intelligence, etc. It seems empirically clear that this is the case.16 The denials seem to be based on the simple faith that all men are “really” equal in all respects or could be made equal under proper conditions. Generally, the assumptions of uniformity and equality are made implicitly rather than explicitly, perhaps because the absurdities and obvious errors of the position would then become clear. For who would deny that not everyone could be an opera singer or a batting champion?

Some writers try to salvage the uniformity assumption by demonstrating that differences in wages occur solely because of the heavy cost of training for certain jobs. Thus, a doctor will earn more than a clerk because, in the nature of the task, a doctor will have to undergo the expenses of years of training (the expenses including actual money costs as well as opportunity costs forgone of earning money in such jobs as clerking). Therefore, in long-run equilibrium, money wage rates will not be uniform in the two fields, but income rates will be enough higher in medicine to just compensate for the loss, so that the net wage or income rates, considered over the person's lifetime, will be the same.

It is true that costs of training do enter in this way into market wage rates. But they do not account for all wage differentials by any means. Inherent differences in personal ability are also vital. Decades of training will not convert the average person into an opera star or a baseball champion.17

Many writers have based their analyses on the assumption of the homogeneity of all workers. Consequently, when they find that generally well-liked jobs, such as television-directing, pay more than such disliked jobs as ditch-digging, they tend to assume that there is injustice and chicanery afoot. A recognition of differences in labor productivity, however, eliminates this bugbear.18 In such cases, a psychic component still exists that relatively lowers the wage of the better-liked job, but it is offset by the higher marginal value productivity and skill attached to the latter. Since TV-directing takes more skill than ditch-digging, or rather skill that fewer people have, the wage rates in the two occupations cannot be equalized.