We have seen throughout that the processes of price determination for the unit services of land and labor are exactly the same. Both sets of factors tend to earn their MVP; both receive advances of present money from capitalist-entrepreneurs; etc. The analysis of the pricing of unit services of original or “permanent” factors applies equally to each. There are three basic differences between the conditions of land and those of labor, however, that make separation of the two important. One we have already dealt with in detail: that (in the free economy) land can be capitalized in its price as a “whole factor” and therefore earns simply interest and entrepreneurial changes in asset value; while labor cannot be capitalized. A second difference we have been considering—the empirical fact that labor has been more scarce than land factors. A corollary of this is that labor is preeminently the nonspecific factor, which is applicable to all processes of production, whereas land tends to be far more specific. A third difference derives from the fact that laborers are human beings and—also an empirical fact—that leisure is always a consumers’ good. As a result, there will be reserve prices for labor against leisure, whereas land—in the broadest sense—will not have a reserve price. We shall deal with the effects of this distinction presently.

The fact that labor is scarcer and nonspecific means that there will always be unused land. Only the best and most productive land will be used, i.e., the land with the highest DMVPs. Similarly, in the real world of uncertainty, where errors are made, there will also be unused capital goods, i.e., in places where malinvestments had been made which turned out to be unprofitable.

In its particular uses, the landowner will have a reservation demand, since he may obtain a higher return by shifting to another use. The greater the extent of alternate uses, the flatter each particular supply curve will tend to be.

In Figure 62, the left-hand diagram depicts the supply and demand curves for the general use of a land factor, including all uses. The supply curve will be the stock—a vertical straight line. The right-hand diagram below depicts typical demand and supply curves for a particular use; here, the supply curve slopes upward because it can shift to and from the alternative use or uses. The intersection of the supply and demand curves, in each instance, yields the rental price, equaling the discounted marginal value product for the total quantity of the factor available. The price for the general uses, 0C, will be the same as the prices 0E, etc., for any particular use, since the price of the factor must, in equilibrium, be the same in all uses. The general diagram also yields the total quantity that will be sold for rent, 0S1, which will equal the total supply of the land factor available. The sum of the equilibrium quantities (such as EB on the diagram) supplied for particular uses would equal the total supplied for all uses, 0S1. 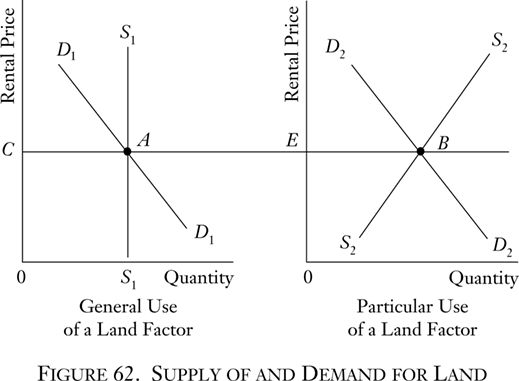 We have seen that the prices of consumers’ goods are set by consumers’ demand schedules, as determined by their value scales, i.e., by the way that the quantity supplied by producers (the first-rank capitalists) will be valued by consumers. When, in the changing economy, producers have speculative reservation demands, the price will, at any moment, be set by the total demand for the given stock, and this will always tend to approach the true consumers’ demand price. A similar situation obtains in land. The prices of land factors will be determined by the general schedule of the factors’ DMVPs and will be set according to the point of intersection of the total quantity, or stock, of the factor available, with its discounted marginal value productivity schedule. The DMVP, in turn, is, as we have seen at length, determined by the extent to which this factor serves the consumers. The MVP is determined directly by the degree that a factor unit serves the consumers, and the discount is determined by the extent that consumers choose saving-investment as against present consumption. Therefore, the value scales of the consumers determine, given the stocks of original factors, all the various results of the market economy that need to be explained: the prices of the original factors, the allocation of original factors, the incomes to original factors, the rate of time preferences and interest, the length of the production processes in use, and the amounts and types of the final products. In our changing real world, this beautiful and orderly structure of the free market economy tends to be attained through the drive of the entrepreneurs toward making profit and avoiding loss.12

At this point, let us consider a great bugaboo of the Henry Georgists—speculation in land that withholds productive land from use. According to the Georgists, a whole host of economic evils, including the depressions of the business cycle, stem from speculative withholding of ground land from use, causing an artificial scarcity and high rents for the sites in use. We have seen above that speculation in consumers’ goods (and the same will also apply to capital goods) performs the highly useful function of speeding adjustment to the best satisfaction of consumer demand. Yet, curiously, speculation in land is far less likely to occur and is far less important than in the case of any other economic good. For consumers’ or capital goods, being nonpermanent, can be used either now or at some later date. There is a choice between use in the present or use at various times in the future. If the owner of the good estimates that demand for the good will be higher in the future and therefore its price will be greater, he will, provided that the length of waiting time is not too costly in terms of time preference and storage, keep the goods on hand (in inventory) until that date. This serves the consumers by shifting the good from use at present to a more highly valued use in the future.

Land, however, is a permanent resource, as we have seen. It can be used all the time, both in the present and in the future. Therefore, any withholding of land from use by the owner is simply silly; it means merely that he is refusing monetary rents unnecessarily. The fact that a landowner may anticipate that his land value will increase (because of increases in future rents) in a few years furnishes no reason whatever for the owner to refuse to acquire rents in the meanwhile. Therefore, a site will remain unused simply because it would earn zero rent in production. In many cases, however, a land site, once committed to a certain line of production, could not easily or without substantial cost be shifted to another line. Where the landowner anticipates that a better line of use will soon become available or is in doubt on the best commitment for the land, he will withhold the land site from use if his saving in “change-over cost” will be greater than his opportunity cost of waiting and of forgoing presently obtainable rents. The speculative site-owner is, then, performing a great service to consumers and to the market in not committing the land to a poorer productive use. By waiting to place the land in a superior productive use, he is allocating the land to the uses most desired by the consumers.

What probably confuses the Georgists is the fact that many sites lie unused and yet command a capital price on the market. The capital price of the site might even increase while the site continues to remain idle. This does not mean, however, that some sort of villainy is afoot. It simply means that no rents on the site are expected for the first few years, although it will earn positive rents thereafter. The capital value of ground land, as we have seen, sums up the discounted total of all future rents, and these rental sums may exert a tangible influence from a considerable distance in the future, depending on the rate of interest. There is therefore no mystery in the fact of a capital value for an idle site, or in its rise. The site is not being villainously withheld from production.13

Let us now consider the effect of a change in the supply of a land factor. Suppose that there is an increase in the supply of land in general, the supply of labor and savings remaining constant. If the new land is submarginal in relation to land presently in use, it is obvious that the new land will not be used, but will, instead, join its fellow submarginal land sites in idleness. If, on the other hand, the new land is superior, and therefore would earn a positive rent, it comes into use. There has been, however, no increase in labor or capital, so that it will not be profitable for these factors to be employed on a greater total amount of land than before. The new productive land, competing with the older land, will therefore push the previously just-marginal land into the submarginal category. Labor will always employ capital on the best land, and so the new acquisition of supramarginal land will oust the previously marginal land from production. Since the new land is more value-productive than the old marginal land which it replaces, the change increases the total output of goods in the society.