11. The Time Structure of Interest Rates

It is clear that the natural interest rates are highly flexible; they tend toward uniformity and are easily changed as entrepreneurial expectations change. In the real world the prices of the various factors and intermediate products, as well as of the final products, are subject to continual fluctuation, as are the prices of stock and the interest return on them. It is also clear that the interest rate on short-term loans is easily changed with changed conditions. As the natural interest rate changes, the new loans for short periods can easily conform to the change.

A difficulty seems to arise, however, in the case of long-term producers’ loans. Here is an apparently clear-cut rigid element in the system, and one which can conform to the natural rate of interest in investments only after a great lag. After all, a 20-year loan is contracted at an original interest rate that remains fixed for the duration; is this not a fixed element that cannot conform to changing conditions and valuations? This superficial view is incorrect. Long-term I.O.U.'s can also be bought and sold in a market. Most of these long-term debts are called bonds, and they are traded in a flourishing and flexible bond market. The fixed rate of interest at the beginning is unimportant. Thus, a 100-ounce long-term loan is contracted at 5-percent fixed interest, or five ounces per year. If the general interest rate rises, people will tend to sell their bonds, which have been yielding them only 5 percent, and invest their money elsewhere—either in whole firms, stocks of firms, or short-term loans. This increased willingness to sell bonds—an increased supply schedule—depresses the price of the bond until the interest yield to the buyer is the same as the general interest rate elsewhere. Thus, if the general interest rate goes up from 5 percent to 10 percent, the price of the bond will fall from 100 to 50, so that the fixed annual return of 5 will provide an interest yield of 10 percent. The important element in bond investment is not the original interest rate (the fixed return on the so-called “par value” of the bond), but the interest yield on the market price of the bond. A general lowering of the interest rate will, on the other hand, raise the bond prices above par and push yield below 5 percent. As the day of redemption of the bond draws near, the market price of the bond will, of course, rapidly approach the par value, until it finally sells at par, since the amount redeemed will be the original par value, or principal, of the loan. 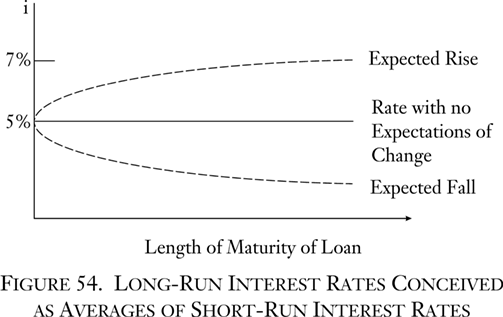 This, however, is a completely question-begging theory. Suppose that a rise in interest rates is expected; why should this be simply confined to a rise in the short-term rates? Why should not the expectation be equally applicable to long-term rates so that they rise as well?39

The theory rests on the quite untenable assumption that it sets out to prove, namely, that there is no tendency for short-term and long-term rates to be equal. The assumption that a change in the interest rate will take place only over the short term is completely unproved and goes against our demonstration that the short-run and long-run rates tend to move together. Further, the theory rests on the implicit assumption that individuals will be content to remain lenders in “shorts” at 5 percent while their fellow investors reap 7 percent on the long market, simply because they expect that eventually, if they stay in the short market, they will earn an average of 7 percent. What is there to prevent a present lender in shorts from selling his currently earning 5-percent loan, purchasing a 7-percent long, waiting for the presumed rise in shorts above 7 percent after two years, and then re-entering the short market, earning 8 percent or 9 percent? If he does this, he will not simply earn 7 percent as the foregoing diagram postulates (either directly in longs or in an average of 5 percent–9 percent in shorts); he will earn 7 percent plus 7 percent plus 7 percent plus 8 percent plus 9 percent, or an annual average of 7.6 percent. By striving to do so, he will set up an irresistible arbitrage movement from shorts to longs, with the rate of interest in the former thereby rising from the sales of loans on the market, and the rate of interest in longs falling, until the rate of interest is uniform throughout the time structure.

The same thing occurs in the case of an expectation of a future fall. Longs cannot remain in equilibrium below shorts for any length of time, since there will be a present movement from longs to shorts on the market, until the rates of interest for all time structures are equal and the arbitrage movement ceases.

The interest rate, then, always tends to be uniform throughout its time structure. What happens if the interest rate is expected to change in the near future? In that case, there will be a similar process as in the case of speculation in commodities. Speculators will bid up the interest rate in the expectation of an imminent rise or bid down the rate in expectation of a fall. Clearly, the earlier a rise or fall is expected to take place, the greater proportionately will be the effect on the speculators, and the greater impact it will have on current movement in the rate. In the case of a commodity, stocks would be withheld in expectation of a rise in demand and price, and then released, thereby effecting a more rapid transition to the price eventually established by underlying supply-and-demand forces. Similarly, in this case money will tend to be withheld from investments and held in cash balances until the rate reaches its expected higher level, or dislodged from cash balances and added to investment if the rate of interest is expected to be lower. This action will speed up the transition to the rate determined by the new alignment of basic time preferences. Just as speculative errors in regard to commodity prices cause losses and impel further change to the “real” underlying price, so speculative errors will be self-correcting here too and lead the rate of interest to the height determined by underlying time preferences.

The time-structure diagram of interest, then, will rather tend to be as depicted in Figure 55.

The absurdity of separating the long-run and the short-run interest rates becomes evident when we realize that the basic interest rate is the natural rate of interest on investments, not interest on the producers’ loan market. We have already seen the essential identity of the rate of earnings on the loan market with that on the stock market. If we consider the stock market, it becomes obvious that there is no distinction in rates between short-run and long-run investments. Different firms engage in stages of production of varying lengths; yet the stock market equates the rate of interest on all investments, obliterating the differences in time structure so thoroughly that it becomes difficult for many writers to grasp the very concept of period of production. But since the operations of the stock market and the loan market are essentially the same, it is obvious that there is no difference in causal explanation between short-run and long-run interest rates. Those writers who postulate an essential difference between the nature of long-run and short-run rates have been misled by a common penchant for considering the time market as confined exclusively to the loan market, when in fact the loan market is only a dependent one.40

In actual practice, it may well happen that either the short-run loan market or the long-run market may change first, with the other market following. Which market characteristically changes first is the outcome of the concrete conditions.41