7. The Myth of the Importance of the Producers’ Loan Market

We have completed our analysis of the determination of the pure rate of interest as it would be in the evenly rotating economy—a rate that the market tends to approach in the real world. We have shown how it is determined by time preferences on the time market and have seen the various components of that time market. This statement will undoubtedly be extremely puzzling to many readers. Where is the producers’ loan market? This market is always the one that is stressed by writers, often to the exclusion of anything else. In fact, “rate of interest” generally refers to money loans, including loans to consumers and producers, but particularly stressing the latter, which is usually quantitatively greater and more significant for production. The rate of interest of money loans to the would-be producer is supposed to be the significant rate of interest. In fact, the fashionable neoclassical doctrine holds that the producers’ loan market determines the rate of interest and that this determination takes place as in Figure 52, where SS is the supply of savings entering the loan market, and DD is the demand for these loans by producers or entrepreneurs. Their intersection allegedly determines the rate of interest. 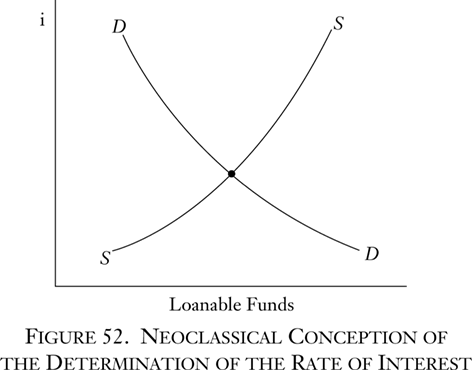 It will be noticed that this sort of approach completely overlooks the gross savings of the producers and, even more, the demand for present goods by owners of the original factors. Instead of being fundamentally suppliers of present goods, capitalists are portrayed as demanders of present goods. What determines the SS and DD schedules, according to this neoclassical doctrine? The SS curve is admittedly determined by time preferences; the DD curve, on the other hand, is supposed to be determined by the “marginal efficiency of capital,” i.e., by the expected rate of return on the investment.

This approach misses the point very badly because it looks at the economy with the superficial eye of an average businessman. The businessman borrows on a producers’ loan market from individual savers, and he judges how much to borrow on the basis of his expected rate of “profit,” or rate of return. The writers assume that he has available a shelf of investment projects, some of which would pay him, say 8 percent, some 7 percent, some 3 percent, etc., and that at each hypothetical interest rate he will borrow in order to invest in those projects where his return will be as high or higher. In other words, if the interest rate is 8 percent, he will borrow to invest in those projects that will yield him over 8 percent; if the rate is 4 percent, he will invest in many more projects—those that will yield him over 4 percent, etc. In that way, the demand curve for savings, for each individual, and still more for the aggregate on the market, will slope rightward as demand curves usually do, as the rate of interest falls. The intersection sets the market rate of interest.

Superficially, this approach might seem plausible. It usually happens that a businessman foresees such varying rates of return on different investments, that he borrows on the market from different individual savers, and that he is popularly considered the “capitalist” or entrepreneur, while the lenders are simply savers. This lends plausibility to terming the DD curve in Figure 52, the demand by capitalists or entrepreneurs for money (present goods). And it seems to avoid mysterious complexities and to focus neatly and simply on the rate of interest for producers’ loans—the loans from savers to businessmen—in which they and most writers on economics are interested. It is this rate of interest that is generally discussed at great length by economists.

Although popular, this approach is wrong through and through, as will be revealed in the course of this analysis. In the first place, let us consider the construction of this DD curve a little more closely. What is the basis for the alleged shelf of available projects, each with different rates of return? Why does a particular investment yield any net monetary return at all? The usual answer is that each dose of new investment has a “marginal value productivity,” such as 10 percent, 9 percent, 4 percent, etc., that naturally the most productive investments will be made first and that therefore, as savings increase, further investments will be less and less value-productive. This provides the basis for the alleged “businessman's demand curve,” which slopes to the right as savings increase and the interest rate falls. The cardinal error here is an old one in economics—the attribution of value-productivity to monetary investment. There is no question that investment increases the physical productivity of the productive process, as well as the productivity per man hour. Indeed, that is precisely why investment and the consequent lengthening of the periods of production take place at all. But what has this to do with value-productivity or with the monetary return on investment, especially in the long run of the ERE?

Suppose, for example, that a certain quantity of physical factors (and we shall set aside the question of how this quantity can be measured) produces 10 units of a certain product per period at a selling price of two gold ounces per unit. Now let us postulate that investment is made in higher-order capital goods to such an extent that productivity multiplies fivefold and that the same original factors can now produce 50 units per period. The selling price of the larger supply of product will be less; let us assume that it will be cut in half to one ounce per unit. The gross revenue per period is increased from 20 to 50 ounces. Does this mean that value-productivity has increased two and a half times, just as physical productivity increased fivefold? Certainly not! For, as we have seen, producers benefit, not from the gross revenue received, but from the price spread between their selling price and their aggregate factor prices. The increase in physical productivity will certainly increase revenue in the short run, but this refers to the profit-and-loss situations of the real world of uncertainty. The long-run tendency will be nothing of the sort. The long-run tendency, eventuating in the ERE, is toward an equalization of price spreads. How can there be any permanent benefit when the cumulative factor prices paid by this producer increase from, say, 18 ounces to 47 ounces? This is precisely what will happen on the market, as competitors vie to invest in these profitable situations. The price spread, i.e., the interest rate, will again be 5 percent.

In sum, the neoclassical doctrine maintains that the interest rate, by which is largely meant the producers’ loan market, is co-determined by time preference (which determines the supply of individual savings) and by marginal (value) productivity of investment (which determines the demand for savings by businessmen), which in turn is determined by the rates of return that can be achieved in investments. But we have seen that these very rates of return are, in fact, the rate of interest and that their size is determined by time preferences. The neoclassicists are partly right in only one respect—that the rate of interest in the producers’ loan market is dependent on the rates of return on investment. They hardly realize the extent of this dependence, however. It is clear that these rates of return, which will be equalized into one uniform rate, constitute the significant rate of interest in the production structure.27,28

Discarding the neoclassical analysis, we may ask: What, then, is the role of the productive loan market and of the rate of interest set therein? This role is one of complete and utter dependence on the rate of interest as determined above, and manifesting itself, as we have seen, in the rate of investment return, on the one hand, and in the consumers’ loan market, on the other. These latter two markets are the independent and important subdivisions of the general time market, with the former being the important market for the production system.