When we state that the time-preference schedules of all individuals in the society determine the interest rate and the proportion of savings to consumption, we mean all individuals, and not some sort of separate class called “capitalists.” There is a temptation, since the production structure is analyzed in terms of different classes—landowners, laborers, and capitalists—to conclude that there are three definite stratified groups of people in society corresponding to these classifications. Actually, in economic analysis of the market we are concerned with functions rather than whole persons per se. In reality, there is no special class of capitalists set off from laborers and landowners. This is not simply due to the trite fact that even capitalists must also be consumers. It is also due to the more important fact that all consumers can be capitalists if they wish. They will be capitalists if their time-preference schedules so dictate. Time-market diagrams such as shown above apply to every man, and not simply to some select group known as capitalists. The interchange of the various aggregate supply and demand diagrams throughout the entire time market sets the equilibrium rate of interest on the market. At this rate of interest, some individuals will be suppliers of present goods, some will be demanders, the curves representing the supply and demand schedules of others will be coinciding with their line of origin and they will not be in the time market at all. Those whose time-preference schedules at this rate permit them to be suppliers will be the savers—i.e., they will be the capitalists.

The role of the capitalists will be clarified if we ask the question: Where did they get the money that they save and invest? First, they may have obtained it in what we might call “current” production; i.e., they could have received the money in their current capacities as laborers, landowners, and capitalists. After they receive the money, they must then decide how to allocate it among various lines of goods, and between consumption and investment. Secondly, the source of funds could have been money earned in past rounds of production and previously “hoarded,” now being “dishoarded.” We are, however, leaving out hoarding and dishoarding at this stage in the analysis. The only other source, the third source, is new money, and this too will be discussed later.

For the moment, therefore, we shall consider that the money from which savings derive could only have come from recent earnings from production. Some earnings were obtained as capitalists, and some as owners of original factors.

The reader might here have detected an apparent paradox: How can a laborer or a landowner be a demander of present goods, and then turn around and be a supplier of present goods for investment? This seems to be particularly puzzling since we have stated above that one cannot be a demander and a supplier of present goods at the same time, that one's time-preference schedule may put one in one camp or the other, but not in both. The solution to this puzzle is that the two acts are not performed at the same time, even though both are performed to the same extent in their turn in the endless round of the evenly rotating economy.

Let us reproduce the typical individual time-preference schedule (Figure 48). At a market interest rate of 0A, the individual would supply savings of AB; at a market interest rate of 0C, he would demand money of amount CE. Here, however, we are analyzing more carefully the horizontal axis. The point 0 is the point of origin. It is the point at which the person deliberates on his course of action, i.e., the position he is in when he is consulting, so to speak, his time-preference scales. 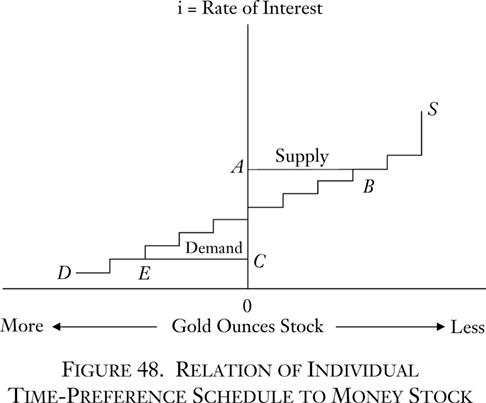 Specifically, this is his position with respect to the size of his money stock at the time of origin. At point O, he has a certain money stock, and he is considering how much of his stock he is willing to give up in exchange for future goods or how much new stock he would like to acquire while giving up future goods. Suppose that he is a saver. As the curve moves to the right, he is giving up more and more of his present money stock in exchange for future goods; therefore, his minimum interest return becomes greater. The further the curve goes to the right, then, the lower will his final money stock be. On the other hand, consider the same individual when he is a demander of present goods. As the curve proceeds to the left, he increases his stock of present goods and gives up future goods. Considering both sides of the point of origin, then, we see that the further right the curve goes, the less stock he has; the further left, the greater his stock.

Given his time-preference schedule, therefore, he is bound to be in a greater supply position the more money he has, and in more of a demand position the less money he has. Before the laborer or landowner sells his services, he has a certain money stock—a cash balance that he apparently does not reduce below a certain minimum. After he sells his services, he acquires his money income from production, thereby adding to his money stock. He then allocates this income between consumption and savings-investment, and we are assuming no hoarding or dishoarding. At this point, then, when he is allocating, he is in a far different position and at a different point in time. For now he has had a considerable addition to his money stock.

Let us consider (Figure 49) the individual's time-market graph with two different points of origin, i.e., two different sizes of money stock, one before he earns his income (I), and one immediately after (II). 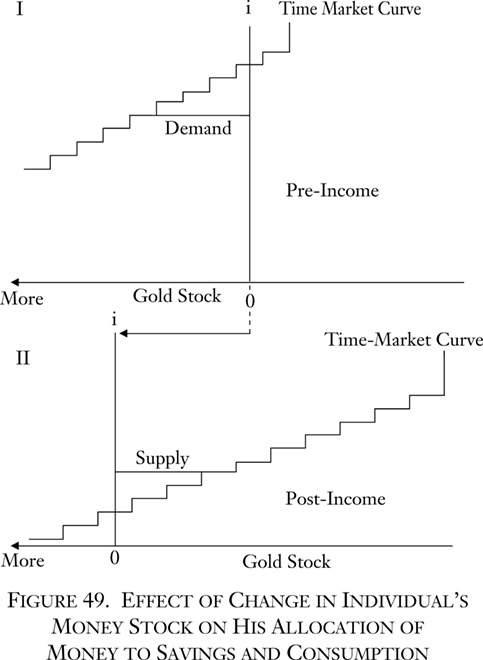 Here we see how a laborer or a landowner can be a demander at one time, in one position of his money stock, and a supplier at another time. With very little money stock, as represented in the first diagram, he is a demander. Then, he acquires money in the productive arena, greatly increases his money stock, and therefore the point of origin of his decision to allocate his money income shifts to the left, so that he might well become a supplier out of his income. Of course, in many cases, he is still a demander or is not on the time market at all. To coin a phrase to distinguish these two positions, we may call his original condition a “pre-income position” (before he has sold his services for money), and the latter a “post-income position”—his situation when he is allocating his money income. Both points of origin are relevant to his real actions.

We have seen above that a landowner's pre-income demand for money is likely to be practically inelastic, or vertical, while a laborer's will probably be more elastic. Some individuals in a post-income position will be suppliers at the market rate of interest; some will be demanders; some will be neutral. The four diagrams in Figure 50 depict various pre-income and post-income time-preference situations, establishing individual time-market curves, with the same market rate of interest applied to each one. 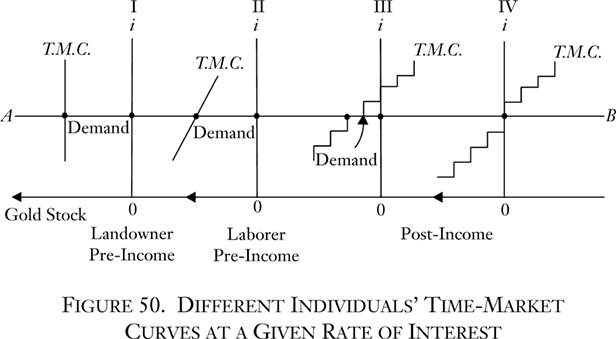 The line AB, across the page, is our assumed market rate of interest, equilibrated as a result of the individual time-preference scales. At this rate of interest, the landowner and the laborer (I and II) are shown with demands for present money (pre-income), and diagrams III and IV depict a demander at this rate and a neutral at this rate, one who is moved neither to supply nor to demand money in the time market. Both the latter are in post-income situations.

We conclude that any man can be a capitalist if only he wants to be. He can derive his funds solely from the fruits of previous capitalist investment or from past “hoarded” cash balances or solely from his income as a laborer or a landowner. He can, of course, derive his funds from several of these sources. The only thing that stops a man from being a capitalist is his own high time-preference scale, in other words, his stronger desire to consume goods in the present. Marxists and others who postulate a rigid stratification—a virtual caste structure in society—are in grave error. The same person can be at once a laborer, a landowner, and a capitalist, in the same period of time.26

It might be argued that only the “rich” can afford to be capitalists, i.e., those who have a greater amount of money stock. This argument has superficial plausibility, since from our diagrams above we saw that, for any given individual and a given time-preference schedule, a greater money stock will lead to a greater supply of savings, and a lesser money stock to a lesser supply of savings. Ceteris paribus, the same applies to changes in money income, which constitute additions to stock. We cannot, however, assume that a man with (post-income) assets of 10,000 ounces of gold will necessarily save more than a man with 100 ounces of gold. We cannot compare time preferences interpersonally, any more than we can formulate interpersonal laws for any other type of utilities. What we can assert as an economic law for one person we cannot assert in comparing two or more persons. Each person has his own time-preference schedule, apart from the specific size of his monetary stock. Each person's time-preference schedule, as with any other element in his value scale, is entirely of his own making. All of us have heard of the proverbially thrifty French peasant, compared with the rich playboy who is always running into debt. The common-sense observation that it is generally the rich who save more may be an interesting historical judgment, but it furnishes us with no scientific economic law whatever, and the purpose of economic science is to furnish us with such laws. As long as a person has any money at all, and he must have some money if he participates in the market society to any extent, he can be a capitalist.