Before considering the component parts of the time market further, let us go to the very root of the matter: the value scale of the individual. As we have seen in the problem of pricing and demand, the individual's value scale provides the key to the determination of all events on the market. This is no less true in regard to the interest rate. Here the key is the schedule of time-preference valuations of the individual.

Let us consider a hypothetical individual, abstracting from any particular role that he may play in the economic system. This individual has, of necessity, a diminishing marginal utility of money, so that each additional unit of money acquired ranks lower on his value scale. This is necessarily true. Conversely, and this also follows from the diminishing marginal utility of money, each successive unit of money given up will rank higher on his value scale. The same law of utility applies to future money, i.e., to prospects of future money. To both present money and future money there applies the general rule that more of a good will have greater utility than less of it. We may illustrate these general laws by means of the following hypothetical value scale of an individual: 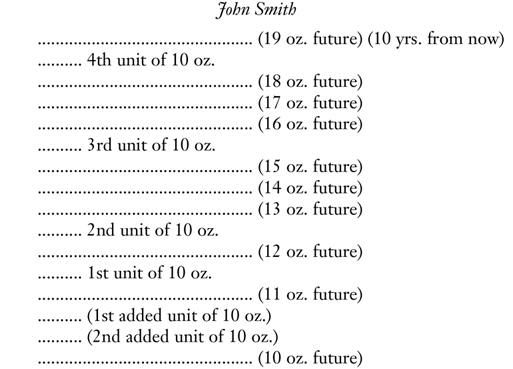 We see in this value scale an example of the fact that all possible alternatives for choice are ranged in one scale, and the truths of the law of utility are exemplified. The “1st unit of 10 oz.” refers to the rank accorded to the first unit of 10 ounces (the unit arbitrarily chosen here) to be given up. The “2nd unit of 10 ounces” of money to be given up is accorded higher rank, etc. The “1st added unit of 10 oz.” refers to the rank accorded to the next unit of 10 ounces which the man is considering acquiring, with parentheses to indicate that he does not now have the good in his possession. Above we have a schedule of John Smith's value scale with respect to time, i.e., his scale of time preferences. Suppose that the market rate of interest, then, is 3 percent; i.e., he can obtain 13 ounces of future money (considered here as 10 years from now), by selling 10 ounces of present money. To see what he will do, we are privileged to be able to consult his time-preference scale. We find that 13 ounces of future money is preferred to his first unit of 10 ounces and also to the second unit of 10 ounces, but that the third unit of 10 ounces stands higher in his valuation. Therefore, with a market rate of 3 percent per year, the individual will save 20 ounces of gold and sell them for future money on the time market. He is a supplier of present goods on the time market to the extent of 20 ounces.8

If the market rate of interest is 2 percent, so that 12 future ounces would be the price of 10 present ounces, then John Smith would be a supplier of 10 ounces of present money. He is never a supplier of future money because, in his particular case, there are no quantities of future money above 10 ounces that are ranked below “1st added unit of 10 oz.”

Suppose, for example, that James Robinson has the following time-value scale: 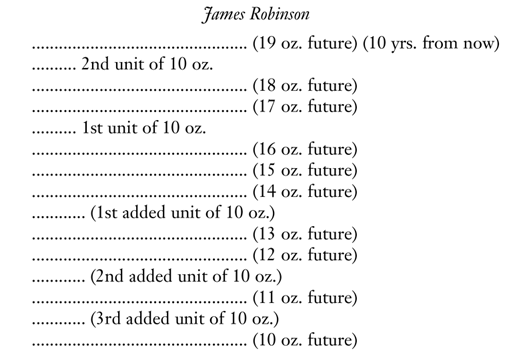 It will be noticed that there is no listing for less than 10 ounces of future goods, to be compared with 10 ounces of present goods. The reason is that every man's time preference is positive, i.e., one ounce of present money will always be preferred to one ounce or less of future money. Therefore, there will never be any question of a zero or negative pure interest rate. Many economists have made the great mistake of believing that the interest rate determines the time-preference schedule and rate of savings, rather than vice versa. This is completely invalid. The interest rates discussed here are simply hypothetical schedules, and they indicate and reveal the time-preference schedules of each individual. In the aggregate, as we shall see presently, the interaction of the time preferences and hence the supply-demand schedules of individuals on the time market determine the pure rate of interest on the market. They do so in the same way that individual valuations determine aggregate supply and demand schedules for goods, which in turn determine market prices. And once again, it is utilities and utilities alone, here in the form of time preferences, that determine the market result; the explanation does not lie in some sort of “mutually determining process” of preferences and market consequences. 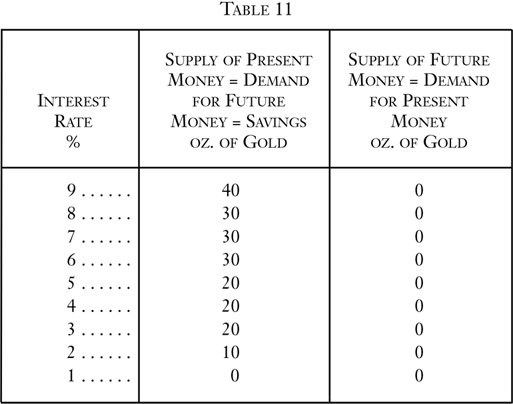 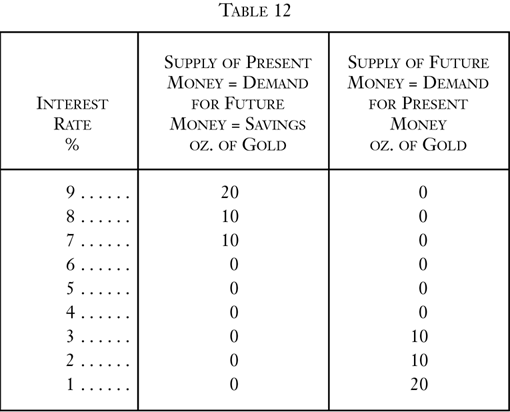 It should be evident that an individual, at any one time, will either be a net saver (i.e., a net demander of future goods), a net supplier of future goods, or not be on the time market at all. The three categories are mutually exclusive.

The diagram in Figure 42 sketches the schedules of Smith and Robinson in graphic form. Interest rate is on the vertical axis, and money on the horizontal. The supplies of present goods are also demands for future goods, and the demand for present goods is also the supply of future goods. 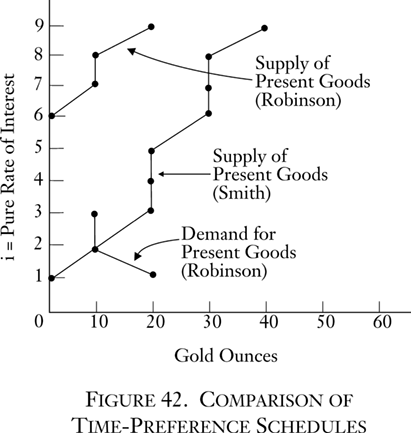 We cannot compare utilities or values between persons, but we certainly may say that Robinson's time-preference schedule is higher than Smith's. In other words, it cannot make sense to compare the rankings or utilities that the two men accord to any particular unit of a good, but we can (if we know them) compare their schedules based purely on their demonstrated time preferences. Robinson's time-preference schedule is higher than Smith's, i.e., at each hypothetical rate of interest Robinson's values are such that he will part with less of his present goods in exchange for future goods.10

Let us explore the typical individual time-preference schedule, or time-supply-and-demand schedule, more closely. In the first place, there is no necessity for the unit chosen to be 10 ounces. Since money is perhaps the most divisible of goods, it is possible to break down the units into far smaller sizes. Furthermore, because of the arbitrage of the market, the rate of interest return on investments of present in future goods will be equal for all the various sizes of units. We may therefore visualize a comparatively smooth curve, even for each individual.

One inevitable characteristic of an individual's time-preference schedule is that eventually, after a certain amount of present money has been supplied on the market, no conceivable interest rate could persuade him to purchase more future goods. The reason is that as present money dwindles and future money increases in a man's possession, the marginal utility of the former increases on the man's value scale, and the marginal utility of the latter decreases. In particular, every man must consume in the present, and this drastically limits his savings regardless of the interest rate. As a result, after a certain point, a man's time preference for the present becomes infinite, and the line representing his supply of present goods becomes vertical upward. At the other end of the scale, the fact of time preference will imply that at some minimum rate of interest the man will not save at all. At what point the supply curve hits the vertical axis depends on the valuations of the individual; but it must do so, as a result of the operation of the law of time preference. A man could not prefer 10 ounces or even less of future money to 10 ounces of present money.11

What happens after the individual supply curve hits the vertical axis depends entirely on the time preferences of the individual. In some cases, as in that of John Smith above, the person's marginal utility of money falls too fast, as compared with that of future money, for him to participate as a net demander of present goods at low rates of interest. In other words, Smith's time-preference ratio is too low in this area for him to become a demander of present goods and a supplier of future goods. On the other hand, Robinson's higher schedule of time preferences is such that, at low rates of interest, he becomes a supplier of future goods for present goods. (See Figure 42.)

We may of course, diagram a typical individual's supply and demand curve conventionally, as we have done in Figure 42. On the other hand, we may also modify this diagram, so as to make one continuous curve of the individual's activity on the time market. We may call this curve the “individual's time-market curve.” At higher interest rates, down to where it hits the vertical axis, this curve is simply the individual's supply curve of present goods. But below this, we are reversing his demand curve and continuing it on to the left on the horizontal axis. (See Figure 43.) 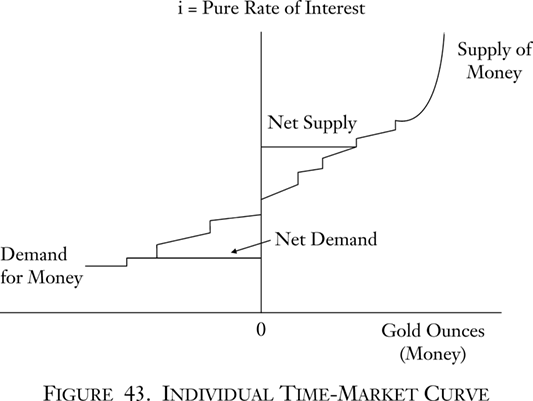 A typical aggregate market diagram may be seen in Figure 44. Aggregating the supply and demand schedules on the time market for all individuals in the market, we obtain curves such as SS and DD. 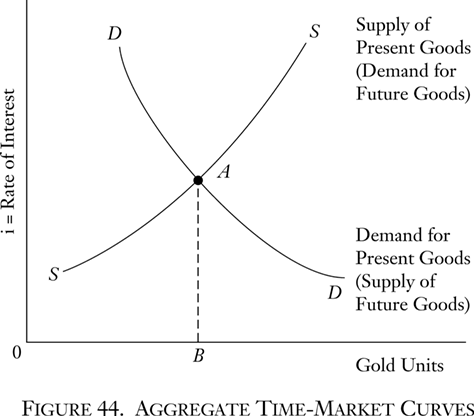 The intersection of the two curves determines an equilibrium rate of interest, BA, and an equilibrium amount saved, 0B. 0B is the total amount of money that will be saved and invested in future money. At a higher interest rate than BA, present goods supplied would exceed future goods supplied in exchange, and the excess savings would compete with one another until the price of present goods in terms of future goods would decline toward equilibrium. If the rate of interest were below BA, the demand for present goods by suppliers of future goods would exceed the supply of savings, and the competition of this demand would push interest rates up toward equilibrium.

Perhaps more fallacies have been committed in discussions concerning the interest rate than in the treatment of any other aspect of economics. It took a long while for the crucial importance of time preference in the determination of the pure rate of interest to be realized in economics; it took even longer for economists to realize that time preference is the only determining factor. Reluctance to accept a monistic causal interpretation has plagued economics to this day.12