4. Joint Ownership of the Product by the Owners of the Factors

Let us first consider the case of joint ownership by the owners of all the final co-operating factors.8 It is clear that the 100 ounces of gold accrue to the owners jointly. Let us now be purely arbitrary and state that a total of 80 ounces accrues to the owners of capital goods and a total of 20 ounces to the owners of labor and nature-given factors. It is obvious that, whatever the allocation, it will be, on the unhampered market, in accordance with the voluntary contractual agreement of each and every factor-owner concerned. Now it is clear that there is an important difference between what happens to the monetary income of the laborer and the landowner, on the one hand, and of the owner of capital goods, on the other. For the capital goods must in turn be produced by labor, nature, and other capital goods. Therefore, while the contributor of personal “labor” energy (and this, of course, includes the energy of direction as well as what are called “laborers” in popular parlance) has earned a pure return, the owner of capital goods has previously spent some money for the production or the purchase of his owned factors.

But what of the 80 ounces that we have arbitrarily allocated to the owners of capital goods? To whom do they finally accrue? Since we are assuming in this example of joint ownership that all products are owned by their factor-owners, it also follows that capital goods, which are also products, are themselves jointly owned by the factors on the second rank of production. Let us say that each of the three first-order capital goods was produced by five co-operating factors: two types of labor, one type of land, two types of capital goods. All these factor-owners jointly own the 80 ounces. Let us say that each of the first-order capital goods had obtained the following:

The income to each capital good will then be owned by five factor-owners on the second rank of production. 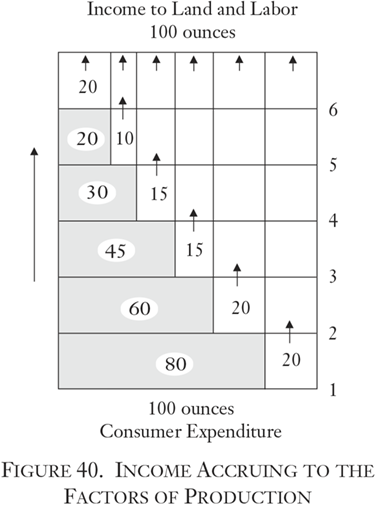 At the bottom of the diagram, we see that 100 ounces of gold are transferred from the consumers to the producers. Some of this money goes to owners of capital goods, some to landowners, some to owners of labor. (The proportion going to one group and the other is arbitrarily assumed in the example and is of no importance for this analysis.) The amount accruing to the capital-goods owners is included in the shaded portion of the diagram and the amount accruing both to labor and nature-owners is included in the clear portion of the diagram. In the lowest, the first block, the 20 ounces received by owners of land and of labor factors is marked with an upward arrow, followed by a similar upward arrow at the top of the diagram, the top line designating the money ultimately received by the owners of the various factors. The width of the top line (100 ounces) must be equal to the width of the bottom line (100 ounces), since the money ultimately received by the owners of the factors must equal the money spent by the consumers.

In the world that we have been examining, where all products, at whatever stage, are owned jointly by the owners of their factors, it is clear that first work is done on the highest stage. Owners of land and of labor invest their land and labor to produce the highest-order (in this case the fifth) capital good; then these owners turn the good over to the owners of labor and land at the next lower stage; these produce the fourth-order capital good, which in turn co-operates with labor and land factors on that stage to produce the lower-order good, etc. Finally, the lowest stage is reached, and the final factors co-operate to produce the consumers’ good. The consumers’ good is then sold to consumers.9

The income that would be earned by the factors, in a world of purely specific factors, depends entirely on consumer demand for the particular final product. If consumers spend 100 ounces on the good, then the factors will jointly earn 100 ounces. If they spend 500 ounces, the factors will earn that amount. If they spend nothing on the product, and the producers have made the enormous entrepreneurial error of working on a product that the consumers do not buy, the factors earn precisely zero. The joint monetary income earned by the owners of the factors fluctuates pari passu with consumer demand for the product.

At this point, a question naturally arises: What happens to owners of factors who earn a zero return? Must they “starve”? Fundamentally, we cannot answer this question for concrete individual persons, since economics demonstrates truths about “functional” earnings in production, and not about the entire earnings of a given person. A particular person, in other words, may experience a zero return on this good, while at the same time earning a substantial return on ownership of another piece of land. In cases where there is no such ownership in another area, the individual may pursue isolated production that does not yield a monetary return, or, if he has an accumulated monetary cash balance, he may purchase goods by reducing the balance. Furthermore, if he has such a balance, he may invest in land or capital goods or in a production organization owning them, in some other line of production. His labor, on our assumptions, may be a specific factor, but his money is usable in every line of production.

Suppose we assume the worst possible case—a man with no cash balance, with no assets of capital, and whose labor is a specific factor the product of which has little or no consumer demand.11 Is he not truly an example of an individual led astray by the existence of the market and the specialization prevalent on it? By subjecting himself to the consumer has he not placed his happiness and existence in jeopardy? Even granting that people chose a market, could not the choice turn out to be tragic for many people?

The answer is that there is no basis whatever for such strictures on the market process. For even in this impossible case, the individual is no worse off than he would have been in isolation or barter. He can always revert to isolation if he finds he cannot attain his ends via the market process. The very fact that we consider such a possibility ludicrous is evidence of the enormous advantages that the market confers upon everyone. Indeed, empirically, we can certainly state that, without the modern, developed market, and thrown back into isolation, the overwhelming majority of individuals could not obtain enough exchangeable goods to exist at all. Yet this choice always remains open to anyone who, for any reason, voluntarily prefers isolation to the vast benefits obtainable from the market system. Certainly, therefore, complaints against the market system by disgruntled persons are misplaced and erroneous. Any person or group, on the unhampered market, is free to abandon the social market at any time and to withdraw into any other desired form of co-operative arrangement. People may withdraw into individual isolation or establish some sort of group isolation or start from the beginning to re-create their own market. In any case, on the free market, their choice is entirely their own, and they decide according to their preferences unhampered by the use or threat of violence.12

Our example of the “worst possible case” enables us to analyze one of the most popular objections to the free society: that “it leaves people free to starve.” First, from the fact that this objection is so widespread, we can easily conclude that there will be enough charitable people in the society to present these unfortunates with gifts. There is, however, a more fundamental refutation. It is that the “freedom-to-starve” argument rests on a basic confusion of “freedom” with “abundance of exchangeable goods.” The two must be kept conceptually distinct. Freedom is meaningfully definable only as absence of interpersonal restrictions. Robinson Crusoe on the desert island is absolutely free, since there is no other person to hinder him. But he is not necessarily living an abundant life; indeed, he is likely to be constantly on the verge of starvation. Whether or not man lives at the level of poverty or abundance depends upon the success that he and his ancestors have had in grappling with nature and in transforming naturally given resources into capital goods and consumers’ goods. The two problems, therefore, are logically separate. Crusoe is absolutely free, yet starving, while it is certainly possible, though not likely, for a given person at a given instant to be a slave while being kept in riches by his master. Yet there is an important connection between the two, for we have seen that a free market tends to lead to abundance for all of its participants, and we shall see below that violent intervention in the market and a hegemonic society tend to lead to general poverty. That a person is “free to starve” is therefore not a condemnation of the free market, but a simple fact of nature: every child comes into the world without capital or resources of his own. On the contrary, as we shall see further below, it is the free market in a free society that furnishes the only instrument to reduce or eliminate poverty and provide abundance.