3. Determination of Supply and Demand Schedules

Every money price of a good on the market, therefore, is determined by the supply and demand schedules of the individual buyers and sellers, and their action tends to establish a uniform equilibrium price on the market at the point of intersection, which changes only when the schedules do.8 Now the question arises: What are the determinants of the demand and supply schedules themselves? Can any conclusions be formed about the value scales and the resulting schedules?

In the first place, the analysis of speculation in chapter 2 can be applied directly to the case of the money price. There is no need to repeat that analysis here.9 Suffice it to say, in summary, that, in so far as the equilibrium price is anticipated correctly by speculators, the demand and supply schedules will reflect the fact: above the equilibrium price, demanders will buy less than they otherwise would because of their anticipation of a later drop in the money price; below that price, they will buy more because of an anticipation of a rise in the money price. Similarly, sellers will sell more at a price that they anticipate will soon be lowered; they will sell less at a price that they anticipate will soon be raised. The general effect of speculation is to make both the supply and demand curves more elastic, viz., to shift them from DD to D′D′ and from SS to S′S′ in Figure 37. The more people engage in such (correct) speculation, the more elastic will be the curves, and, by implication, the more rapidly will the equilibrium price be reached. 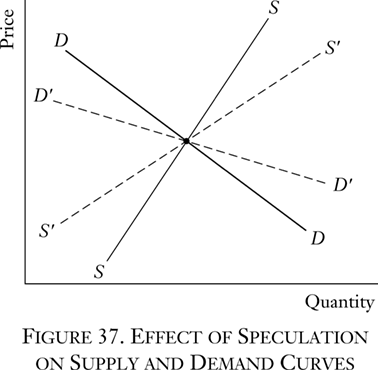 Setting speculation aside, then, let us return to the buyer's demand schedules. Suppose that he ranks the unit of a good above a certain number of ounces of gold on his value scale. What can be the possible sources of his demand for the good? In other words, what can be the sources of the utility of the good to him? There are only three sources of utility that any purchase good can have for any person.11 One of these is (a) the anticipated later sale of the same good for a higher money price. This is the speculative demand, basically ephemeral—a useful path to uncovering the more fundamental demand factors. This demand has just been analyzed. The second source of demand is (b) direct use as a consumers’ good; the third source is (c) direct use as a producers’ good. Source (b) can apply only to consumers’ goods; (c) to producers’ goods. The former are directly consumed; the latter are used in the production process and, along with other co-operating factors, are transformed into lower-order capital goods, which are then sold for money. Thus, the third source applies solely to the investing producers in their purchases of producers’ goods; the second source stems from consumers. If we set aside the temporary speculative source, (b) is the source of the individual demand schedules for all consumers’ goods, (c) the source of demands for all producers’ goods.

What of the seller of the consumers’ good or producers’ good—why is he demanding money in exchange? The seller demands money because of the marginal utility of money to him, and for this reason he ranks the money acquired above possession of the goods that he sells. The components and determinants of the utility of money will be analyzed in a later section.

Thus, the buyer of a good demands it because of its direct use-value either in consumption or in production; the seller demands money because of its marginal utility in exchange. This, however, does not exhaust the description of the components of the market supply and demand curves, for we have still not explained the rankings of the good on the seller's value scale and the rankings of money on the buyer's. When a seller keeps his stock instead of selling it, what is the source of his reservation demand for the good? We have seen that the quantity of a good reserved at any point is the quantity of stock that the seller refuses to sell at the given price. The sources of a reservation demand by the seller are two: (a) anticipation of later sale at a higher price; this is the speculative factor analyzed above; and (b) direct use of the good by the seller. This second factor is not often applicable to producers’ goods, since the seller produced the producers’ good for sale and is usually not immediately prepared to use it directly in further production. In some cases, however, this alternative of direct use for further production does exist. For example, a producer of crude oil may sell it or, if the money price falls below a certain minimum, may use it in his own plant to produce gasoline. In the case of consumers’ goods, which we are treating here, direct use may also be feasible, particularly in the case of a sale of an old consumers’ good previously used directly by the seller—such as an old house, painting, etc. However, with the great development of specialization in the money economy, these cases become infrequent.

If we set aside (a) as being a temporary factor and realize that (b) is frequently not present in the case of either consumers’ or producers’ goods, it becomes evident that many market-supply curves will tend to assume an almost vertical shape. In such a case, after the investment in production has been made and the stock of goods is on hand, the producer is often willing to sell it at any money price that he can obtain, regardless of how low the market price may be. This, of course, is by no means the same as saying that investment in further production will be made if the seller anticipates a very low money price from the sale of the product. In the latter case, the problem is to determine how much to invest at present in the production of a good to be produced and sold at a point in the future. In the case of the market-supply curve, which helps set the day-to-day equilibrium price, we are dealing with already given stock and with the reservation demand for this stock. In the case of production, on the other hand, we are dealing with investment decisions concerning how much stock to produce for some later period. What we have been discussing has been the market-supply curve. Here the seller's problem is what to do with given stock, with already produced goods. The problem of production will be treated in chapter 5 and subsequent chapters.

If the good is Chippendale chairs, which cannot be further produced, then the market-supply curves are identical with the supply curves of the old possessors. There is no new production, and there are no additions to stock.

There is one type of consumers’ good the supply curve of which will have to be treated in a later section on labor and earnings. This is personal service, such as the services of a doctor, a lawyer, a concert violinist, a servant, etc. These services, as we have indicated above, are, of course, nondurable. In fact, they are consumed by the seller immediately upon their production. Not being material objects like “commodities,” they are the direct emanation of the effort of the supplier himself, who produces them instantaneously upon his decision. The supply curve depends on the decision of whether or not to produce—supply—personal effort, not on the sale of already produced stock. There is no “stock” in this sphere, since the goods disappear into consumption immediately on being produced. It is evident that the concept of “stock” is applicable only to tangible objects. The price of personal services, however, is determined by the intersection of supply and demand forces, as in the case of tangible goods.

For all goods, the establishment of the equilibrium price tends to establish a state of rest; a cessation of exchanges. After the price is established, sales will take place until the stock is in the hands of the most capable possessors, in accordance with the value scales. Where new production is continuing, the market will tend to be continuing, however, because of the inflow of new stock from producers coming into the market. This inflow alters the state of rest and sets the stage for new exchanges, with producers eager to sell their stock, and consumers to buy. When total stock is fixed and there is no new production, on the other hand, the state of rest is likely to become important. Any changes in price or new exchanges will occur as a result of changes of valuations, i.e., a change in the relative position of money and the good on the value scales of at least two individuals on the market, which will lead them to make further exchanges of the good against money. Of course, where valuations are changing, as they almost always are in a changing world, markets for old stock will again be continuing.12

An example of that rare type of good for which the market may be intermittent instead of continuous is Chippendale chairs, where the stock is very limited and the money price relatively high. The stock is always distributed into the hands of the most eager possessors, and the trading may be infrequent. Whenever one of the collectors comes to value his Chippendale below a certain sum of money, and another collector values that sum in his possession below the acquisition of the furniture, an exchange is likely to occur. Most goods, however, even nonreproducible ones, have a lively, continuing market, because of continual changes in valuations and a large number of participants in the market.