The previous section concentrated on the case of Mr. Brown, whose entire money expenditures were on consumers’ goods. His money income, aside from the sale of old, previously produced goods, came from the sale of current productive labor services. His expenditures were purely on consumption; his income was derived almost solely from his production of labor services. Every man must be a consumer, and therefore this analysis of consumer spending applies to all persons. Most people earn their income from the sale of their labor services. However, if we except previously produced goods, because someone must have originally produced them, all other money incomes must derive from new production of capital goods or consumers’ goods. (This is apart from the sellers of land or its services, whose ownership must have originally derived from the finding and reshaping of unappropriated land.)

A simplified schematic representation of this process is shown in Figure 32. 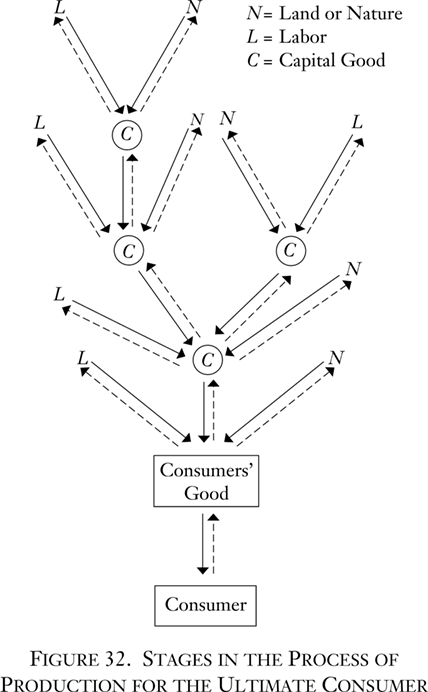 The solid arrows depict the movement of goods in exchange, as factors are bought by the producers at each stage, worked into a lower-order capital good, and then sold to lower-order producers. The broken arrows in the reverse direction depict the movement of money in the same exchanges. The producer of a capital good employed money that he owned to purchase factors of production. He then used these owned factors, along with hired labor services, to produce a lower-order capital good that he owned until he could sell it for money to another producer. The producer of a consumers’ good went through the same process, except that his final sale for money was to the ultimate consumer.

Now let us call those producers who use their money to invest in the purchase of factors (either outright or for hire) capitalists. The capitalists then produce and own the various stages of capital goods, exchanging them for money until their products reach the consumers.

Those who participate in the productive process are therefore the capitalists and the sellers of land and labor services. The capitalists are the only ones who spend money on producers’ goods, and they, therefore, may here be termed “the producers.”

Clearly, the consumer must have money in his cash balance in order to spend it on consumers’ goods, and, likewise, the producer must have the original money to invest in factors. Where does the consumer get the money? As has been shown above, he may obtain it from gifts or from the sale of previously produced goods, but in the last analysis he must have obtained it from the sale of some productive service. The reader can inspect the final destinations of the broken arrows; these are the sellers of labor services and of the services of land. These laborers and landowners use the money thus obtained to buy the final products of the production system. The capitalist-producers also receive income at each stage of the production process. Evidently, the principles regulating these incomes require careful investigation, which will be undertaken below. Here it might be noted that the net incomes accruing to the owners of capital goods are not simply the result of the contribution to production by the capital goods, since these capital goods are in turn the products of other factors.

Where, then, do the producers acquire their money for investment? Clearly, from the same sources only. From the income acquired in production, individuals can, in addition to buying consumers’ goods, purchase factors of production and engage in the productive process as producers of a good that is not simply their own labor service. In order to obtain the money for investment, then, an individual must save money by restricting his possible consumption expenditures. This saved money first goes into his cash balance and then is invested in the purchase of factors in the anticipation of a later sale of the produced good. It is obvious that investment can come only from funds that are saved by individuals from their possible consumption spending. The producers restrict their consumption expenditures, save their money, and “go into business” by investing their funds in factors that will yield them products in the future.12

Thus, while every man must spend part of his money income in consumption, some decide to become producers of capital or consumers’ goods and to save money to invest in the required factors. Every person's income may be spent on consumption, on investment in the production of goods, or on an addition to his cash balance. For any period, an individual's Money Income = his Consumption Expenditures + Investment Expenditures + Additions to Cash Balance – Subtractions from Cash Balance. (Investment expenditures may be defined as the sum of the money expenditures made in investment in factors of production.) 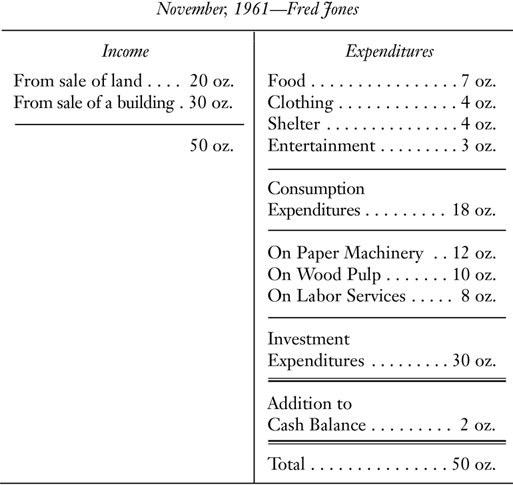 Let us take the hypothetical case of Mr. Fred Jones and his “balance of payments” for November, 1961. Suppose his income from various sources during this month is 50 ounces. He decides to spend, during the month, 18 ounces on consumers’ goods; to add two ounces to his cash balance; and to invest the other 30 ounces in a “business” for the production of some good. It must be emphasized that this business can involve the production of any good at all; it could be a steel factory, a farm, or a retail shoe store. It could be for the purchase of wheat in one season of the year in anticipation of sale in another season. All of this is productive enterprise, since, in each instance, a good is produced, i.e., goods are moved a step forward in their progress to the ultimate consumer. Since the investment is always in anticipation of later sale, the investors are also engaged in entrepreneurship, in enterprise.

Let us assume that Jones expends the saved funds on investment in a paper factory. His income-expenditure account for November may appear as follows in the diagram below. Of course, these figures are purely illustrative of a possible situation; there are innumerable other illustrations; e.g., there could have been a subtraction from cash balance to enable greater investment.

Investment expenditures are always made in anticipation of future sale. Factors are purchased, and transformed into the product, and the product is then sold by the enterpriser for money. The “businessman” makes his outlays with the expectation of being able to sell the product at a certain price on a certain future date. Suppose that Jones makes the investment of 30 ounces with the expectation of being able to transform his factors into the product (in this case, paper) and sell the product for 40 ounces at some date in November, 1962. If his expectation proves correct, he will succeed in selling the paper for 40 ounces at that date, and his income account, for any period that includes that date in November, 1962, will include “40 ounces from sale of paper.”

It is obvious that, other things being equal, an investor will attempt to acquire the greatest possible net income from his investment, just as, with the same qualification, everyone attempts to acquire the greatest income from other types of sales. If Jones is confronted with investment opportunities for his 30 ounces in different possible lines or processes of production, and he expects one will net him 40 ounces in a year, another 37 ounces, another 34, etc., Jones will choose that investment promising the greatest return. A crucial difference, then, between man as an entrepreneur and man as a consumer is that in the latter case there is no drive to have exports greater than imports. A man's imports are his purchase of consumers’ goods and are therefore the ends of his activity. The goods he imports are a source of satisfaction to him. On the other hand, the businessman is “importing” only producers’ goods, which by definition are useless to him directly. He can gain from them only by selling them or their product, and therefore his imports are merely the necessary means to his later “exports.” Therefore, he tries to attain the greatest net income, or, in other words, to attain the largest surplus of exports over imports. The larger his business income, the more the owner of the business will be able to spend (i.e., to import) on consumers’ goods that he desires.

It is clear, however, that the man, considered as a whole, has no particular desire to export more than he imports or to have a “favorable balance of trade.” He tries to export more than he imports of producers’ goods in his business; then he uses this surplus to spend on imports of consumers’ goods for his personal wants. On total balance, he may, like Mr. Brown above, choose to add to his cash balance or subtract from his cash balance, as he sees fit and considers most desirable.13 Let us take as an example Mr. Jones, after he has been established in his business. Over a certain period, he may decide to subtract five ounces from his cash balance. Even though he tries his best to achieve the largest net income from business and thus add to his cash balance as much as possible from this source, in total he may well decide to reduce his cash balance. Thus: