In a money economy, each individual sells goods and services that he owns for money and uses the money to buy desired goods. Each person may make a record of such monetary exchanges for any period of time. Such a record may be called his balance of payments for that period.

One record may be the transactions of goods sold for money in a certain period to other individuals. Suppose, for example, that Mr. Brown draws up the record of goods sold for money for the month of September, 1961. Suppose that he has sold his services as a carpenter to a Mr. Jones in building the latter's house and has sold his services as a handyman to Messrs. Jones and Smith during the same period. Also, he has disposed of an old radio to Mr. Johnson. His account of money received, i.e., money purchased for goods and services sold, is as follows:

It is clear that the more money income a man receives during any period, the more money he will be able to spend on desired goods. Other things being equal (an important qualification that will be examined in later sections), he will strive to earn as much money income in any prospective period as he can.

Mr. Brown acquired his income by selling his labor services and a durable consumers’ good. There are other ways of acquiring money income on an unhampered market. The owner of land may sell it for agricultural, locational, industrial, as well as other, purposes. The owner of capital goods may sell them to those interested in using them as factors of production. Tangible land and capital goods may be sold for money outright, or the owner may retain ownership of the good while selling ownership of its services over a certain period of time. Since any good is bought only for the services that it can bestow, there is no reason why a certain period of service of a good may not be purchased. This can be done, of course, only where it is technically possible. Thus, the owner of a plot of land or a sewing machine or a house may “rent it out” for a certain period of time in exchange for money. While such hire may leave legal ownership of the good in the hands of the “landlord,” the actual owner of the good's service for that period is the renter, or “tenant.” At the end of the hire period, the good is returned to the original owner, who may use or sell the remainder of the services.

Thus, Mr. Green's account of money income for June to December, 1961, may be as follows: 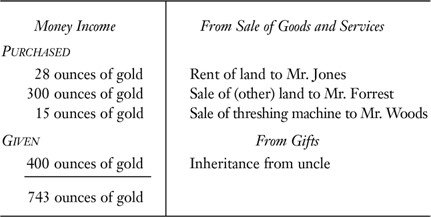 As was seen in the previous chapter, in order first to acquire the good or service that a man can sell for money, he must first either produce it himself or buy it from someone who has produced it (or who, in turn, has bought it from the original producer). If he has been given money, the original owner must have acquired it through producing a good, etc. Thus, in the last analysis, the first seller of a capital good or a durable consumers’ good is the original producer, and later purchasers must have produced some service of their own in order to obtain the money to acquire it. The seller of labor service, of course, produces the service directly at the time. The seller of pure land must originally have appropriated unused land which he had found and transformed. On the unhampered market of a money economy, producers of commodities and services sell their goods for the money commodity, then use the money acquired to buy other desired goods.

Money is acquired in this way by all except the producers of the original gold on the market—those who mined and marketed it. However, the production of the money commodity, as with all other valuable commodities, itself requires the use of land, labor, and capital goods, and these must be paid for by the use of money. The gold miner, then, receives no money by gift, but must actively find and produce gold to acquire his money.

With the use of money acquired in these various ways, individuals purchase desired goods. They do so in two capacities: as consumers and as producers. As consumers, they purchase consumers’ goods that they desire; in the case of durable goods, they may purchase the entire good, or they may hire the services of goods for some specified period of time. As producers, they use money to purchase the services of factors of production needed to produce consumers’ goods or lower-order capital goods. Some factors they may purchase outright, to use all their anticipated future services; some they may hire for their services for a specified period of time. Thus, they may purchase capital goods that function as “raw material”; they may purchase some capital goods called “machines” and hire others; or they may hire or purchase the land that they need to work on. In general, just as consumers cannot very well hire short-lived, nondurable goods, so producers cannot very well hire capital goods, dubbed “raw material” or “inventory,” that are used up quickly in the process of production. On a free market, they cannot purchase labor services outright, as was explained in the preceding chapter. Since man's personal will is inalienable, he cannot, in a voluntary society, be compelled to work for another against his present will, and therefore no contracts can be made for purchase of his future will. Labor services, therefore, can only be bought for “hire,” on a “pay-as-you-go” basis.

Any individual may draw up an account of his purchases of other goods with money for any period of time. The total amount of money given up in such exchanges is his money expenditures or money outlays for that period. Here it must be noted that his expenditure account, as well as his income account, can be itemized for each transaction or may be grouped into various classes.Thus, in Brown's account above, he might have tabulated his income as 25 ounces from labor in general, and one ounce from his radio. How broad or narrow the classes are depends purely on the convenience of the person drawing up the account. The total, of course, is always unaffected by the type of classification chosen. 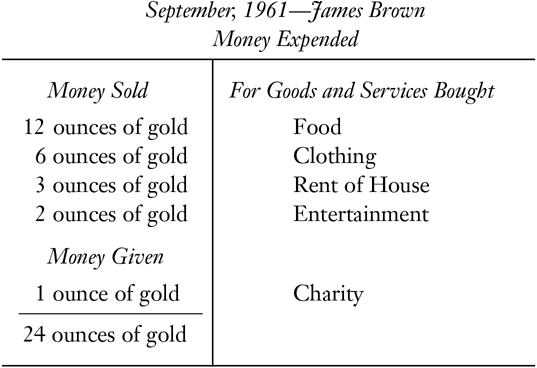 In this account, Brown is spending money purely as a consumer , and his total money expenditures for the period are 24 ounces. If he had desired it, he could have subdivided the account further into such items as apples, 1/5 ounce; hat, one ounce; etc.

Now, let us observe and compare Mr. Brown's income and expenditure accounts for September, 1961. Brown's total money income was 26 ounces of gold, his money expenditures 24 ounces. This must mean that two ounces of the 26 earned in this period remained unspent. These two ounces remain in the possession of Mr. Brown, and are therefore added to whatever previous stock of gold Brown might have possessed. If Brown's stock of money on September 1, 1961, was six ounces of gold, his stock of money on October 1, 1961, is eight ounces of gold. The stock of money owned by any person at any point in time is called his cash holding or cash balance at that time. The two ounces of income remaining unspent on goods and services constituted a net addition to Brown's cash balance over the month of September. For any period, therefore, a person's money income is equal to his money outlay plus his addition to cash balance.

If we subdivide this income-expenditure account into smaller periods of time, the picture of what is happening to the cash balance within the larger period is likely to be far different from a simple addition of two ounces. Thus, suppose that all of Brown's money income came in two chunks on the first and fifteenth of September, while his expenditures occurred every day in varying amounts. As a result, his cash balance rose drastically on September 1, say to six plus 13 or a total of 19 ounces. Then, the cash balance was gradually drawn down each day until it equaled six again on the 15th; then it rose sharply again to 19, finally being reduced to eight at the month's end.

Suppose, on the other hand, that Brown's expenditures for September had been 29 ounces instead of 24 ounces. This was accomplished by drawing down Brown's previous cash balance by three ounces and leaving him with three ounces in his cash holding. In this case, his money expenditures for the period equaled his money income plus the decrease in his cash balance. In sum, the following formula always holds true for any individual over any period of time:

Alternatively, the term Exports can be substituted for Income, and Imports for Expenditures, in the above equation.

It is important to recognize that the additions to, or subtractions from, a cash balance are all voluntary acts on the part of the individuals concerned. In each period, some individuals decide to add to their cash balances, and others decide to reduce them, and each makes that decision which he believes will benefit him most.10 For centuries, however, fallacious popular usage has asserted that one whose income is greater than expenditures (exports greater than imports) has a “favorable balance of trade,” while one whose expenditures have been greater than income for a period (imports greater than exports) has suffered an “unfavorable balance of trade.” Such a view implies that the active, important part of the balance of payments is the “trade” part, the exports and imports, and that the changes in the individual's cash balance are simply passive “balancing factors,” serving to keep the total payments always in balance. In other words, it assumes that the individual spends as much as he wants to on goods and services and that the addition or subtraction from his cash balance appears as an afterthought. On the contrary, changes in cash balance are actively decided upon by each individual in the course of his market actions. Thus, Brown decided to increase his cash balance by two ounces and sold his labor services to obtain the money, forgoing purchases of consumers’ goods to the extent of two ounces. Conversely, in the later example, when he spent three ounces more than he earned in the month, he decided that his cash balance had been excessive and that he would rather spend some of it on consumers’ goods and services. There is therefore never a need for anyone to worry about anyone else's balance of payments. A person's “unfavorable” balance of trade will continue so long as the individual wishes to reduce his cash balance (and others are willing to purchase his money for goods). His maximum limit is, of course, the point when his cash balance is reduced to zero. Most likely, however, he will stop reducing his cash balance long before this point.11