3. Some Implications of the Emergence of Money

The establishment of a money on the market enormously increases the scope for specialization and division of labor, immensely widens the market for every product, and makes possible a society on a civilized productive level. Not only are the problems of coincidence of wants and indivisibility of goods eliminated, but individuals can now construct an ever-expanding edifice of remote stages of production to arrive at desired goods. Intricate and remote stages of production are now possible, and specialization can extend to every part of a production process as well as to the type of good produced. Thus, an automobile producer can sell an automobile in exchange for the money, e.g., butter or gold, and then exchange the gold partly for labor, partly for steel, partly for chrome, partly for rubber tires, etc. The steel producers can exchange the gold partly for labor, partly for iron, partly for machines, etc. Then the various laborers, landowners, etc., who receive the gold in the production process can use it as a medium to purchase eggs, automobiles, or clothing, as they desire.

With the great variety in human skills and natural resources resulting in enormous advantages from the division of labor, the existence of money permits the splitting of production into minute branches, each man selling his product for money and using money to buy the products that he desires. In the field of consumers’ goods, a doctor can sell his services, or a teacher his, for money, and then use the money to purchase goods that he demands. In production, a man can produce a capital good, sell it for money, and use the gold received to purchase the labor, land, and capital goods of a higher order needed for its production. He may use the surplus of money income over money outlay on factors to purchase consumers’ goods for his own needs. Thus, at any stage in the production of any product, a man employs land and labor factors, exchanging money for their services as well as for the needed capital goods, and then sells the product for money to help in the next lower stage of production. This process continues until the final consumers’ goods are sold to consumers. These consumers, on the other hand, obtain their money by purchasing it through the sale of their own goods—either durable consumers’ goods or services in production. The latter may include the sale of labor services, the sale of services of their land, the sale of their capital goods, or inheritance from those who had previously contributed such services.6

Thus, nearly all exchanges are made against money, and money impresses its stamp upon the entire economic system. Producers of consumers’ goods as well as owners of durable consumers’ goods, owners of capital goods, and sellers of labor services, all sell their goods against money and purchase with money the factors that they need. They use their net money income to purchase consumers’ goods produced by others in the society. Thus, all individuals, in their capacity as producers and owners, supply goods (commodities and services) and demand money in exchange. And, in their capacity as producers purchasing factors, as well as in their capacity as consumers, they supply money and demand an almost infinite variety of goods in exchange. The economy is therefore a “money economy,” and almost all goods are compared with and exchanged against the money commodity. This fact is of crucial importance to the analysis of any society beyond the most primitive level. We may sum up the complex pattern of exchanges in a money economy in the following way: 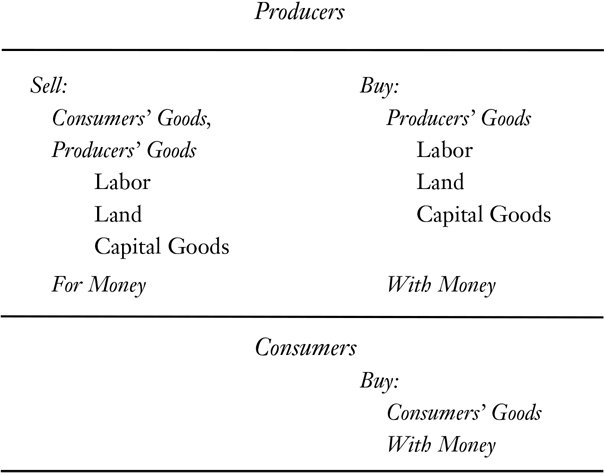