2. The Emergence of Indirect Exchange

The tremendous difficulties of direct exchange can be overcome only by indirect exchange, where an individual buys a commodity in exchange, not as a consumers’ good for the direct satisfaction of his wants or for the production of a consumers’ good, but simply to exchange again for another commodity that he does desire for consumption or for production. Offhand, this might seem a clumsy and roundabout operation. Actually, it is indispensable for any economy above the barely primitive level.

Let us return, for example, to the case of A, with a supply of eggs, who wants a pair of shoes in exchange. B, the shoemaker, has shoes for sale but does not desire any more eggs than he has in stock. A cannot acquire shoes by means of direct exchange. If A wants to purchase a pair of shoes, he must find out what commodity B does want in exchange, and procure it. If A finds that B wants to acquire butter, A may exchange his eggs for the butter of C and then exchange this butter for B's shoes. In this case, butter has been used as a medium of indirect exchange. The butter was worth more to A than the eggs (say the exchange was 10 dozen eggs for 10 pounds of butter, then for one pair of shoes), not because he wanted to consume the butter or to use the butter to produce some other good in a later stage of production, but because the butter greatly facilitated his obtaining the shoes in exchange. Thus, for A, the butter was more marketable than his eggs and was worth purchasing because of its superior marketability. The pattern of the exchange is shown in Figure 30. 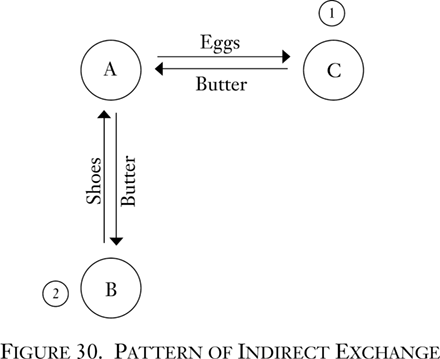 Or consider the enormous benefit that D, the owner of a plow, acquires by using a medium of exchange. D, who would like to acquire many commodities but finds that his plow has a very limited marketability, can sell it in exchange for quantities of a more marketable commodity, e.g., butter. Butter, for one thing, is more marketable because, unlike the plow, its nature is such that it does not lose its complete value when divided into smaller pieces. D now uses the butter as a medium of indirect exchange to obtain the various commodities that he desires to consume.

Just as it is fundamental to human experience that there is great variety in resources, goods desired, and human skills, so is there great variety in the marketability of various commodities. Tending to increase the marketability of a commodity are its demand for use by more people, its divisibility into small units without loss of value, its durability, and its transportability over large distances. It is evident that people can vastly increase the extent of the market for their own products and goods by exchanging them for more marketable commodities and using the latter as media to exchange for goods that they desire. Thus, the pattern of D's, the plow-producer's, exchanges will be as shown in Figure 31. 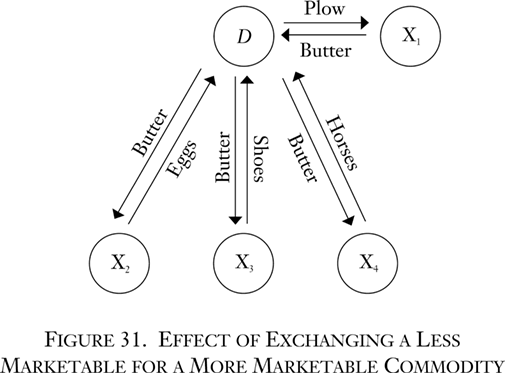 D first exchanges his plow for X1's butter, and then uses the butter to exchange for the various goods that he desires to use, with X2 for eggs, X3 for shoes, X4 for horses, etc.

Economic analysis is not concerned about which commodities are chosen as media of exchange. That is subject matter for economic history. The economic analysis of indirect exchange holds true regardless of the type of commodity used as a medium in any particular community. Historically, many different commodities have been in common use as media. The people in each community tended to choose the most marketable commodity available: tobacco in colonial Virginia, sugar in the West Indies, salt in Abyssinia, cattle in ancient Greece, nails in Scotland, copper in ancient Egypt, and many others, including beads, tea, cowrie shells, and fishhooks.4 Through the centuries, gold and silver (specie) have gradually evolved as the commodities most widely used as media of exchange. Among the factors in their high marketability have been their great demand as ornaments, their scarcity in relation to other commodities, their ready divisibility, and their great durability. In the last few hundred years their marketable qualities have led to their general adoption as media throughout the world.