7. Speculation and Supply and Demand Schedules

We remember that, at any given price, the amount of a good that an individual will buy or sell is determined by the position of the sale good and the purchase good on his value scale. He will demand a good if the marginal utility of adding a unit of the purchase good is greater than the marginal utility of the sale good that he must give up. On the other hand, another individual will be a seller if his valuations of the units are in a reverse order. We have seen that, on this basis, and reinforced by the law of marginal utility, the market demand curve will never decrease when the price is lowered, and the supply curve will never increase when the price decreases.

Let us further analyze the value scales of the buyers and sellers. We have seen above that the two sources of value that a good may have are direct use-value and exchange-value, and that the higher value is the determinant for the actor. An individual, therefore, can demand a horse in exchange for one of two reasons: its direct use-value to him or the value that he believes it will be able to command in exchange. If the former, then he will be a consumer of the horse's services; if the latter, then he purchases in order to make a more advantageous exchange later. Thus, suppose in the foregoing example, that the existing market price has not reached equilibrium—that it is now at 85 barrels per horse. Many demanders may realize that this price is below the equilibrium and that therefore they can attain an arbitrage profit by buying at 85 and reselling at the final, higher price.

We are now in a position to refine the analysis in the foregoing section, which did not probe the question whether or not sales took place before the equilibrium price was reached. We now assume explicitly that the demand schedule shown in Table 2 referred to demand for direct use by consumers. Smoothing out the steps in the demand curve represented in Figure 13, we may, for purposes of simplicity and exposition, portray it as in Figure 18. This, we may say, is the demand curve for direct use. For this demand curve, then, the approach to equilibrium takes place through actual purchases at the various prices, and then the shortages or the surpluses reveal the overbidding or underbidding, until the equilibrium price is finally reached. 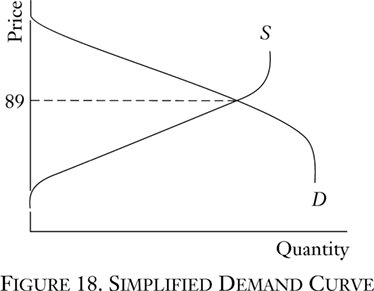 To the extent that buyers foresee the final equilibrium price, however, they will not buy at a higher price (even though they would have done so if that were the final price), but will wait for the price to fall. Similarly, if the price is below the equilibrium price, to the extent that the buyers foresee the final price, they will tend to buy some of the good (e.g., horses) in order to resell at a profit at the final price. Thus, if exchange-value enters the picture, and a good number of buyers act on their anticipations, the demand curve might change as shown in Figure 19. The old demand curve, based only on demand for use, is DD, and the new demand curve, including anticipatory forecasting of the equilibrium price, is D′D′. It is clear that such anticipations render the demand curve far more elastic, since more will be bought at the lower price and less at the higher.

Thus, the introduction of exchange-value can restrict demand above the anticipated equilibrium price and increase it below that price, although the final demand—to consume—at the equilibrium price will remain the same.

Let us suppose the highly unlikely event that all demanders and suppliers are able to forecast exactly the final, equilibrium price. What would be the pattern of supply and demand curves on the market in such an extreme case? It would be as follows: At a price above equilibrium (say 89) no one would demand the good, and suppliers would supply their entire stock. At a price below equilibrium, no one would supply the good, and everyone would demand as much as he could purchase, as shown in Figure 21. Such unanimously correct forecasts are not likely to take place in human action, but this case points up the fact that, the more this anticipatory, or speculative, element enters into supply and demand, the more quickly will the market price tend toward equilibrium. Obviously, the more the actors anticipate the final price, the further apart will be supply and demand at any price differing from equilibrium, the more drastic the shortages and surpluses will be, and the more quickly will the final price be established.

The same process of revelation of error occurs in the case of errors of anticipation by suppliers, and thus the forces of the market tend inexorably toward the establishment of the genuine equilibrium price, undistorted by speculative errors, which tend to reveal themselves and be eliminated. As soon as suppliers or demanders find that the price that their speculative errors have set is not really an equilibrium and that shortages and/or surpluses develop, their actions tend once again to establish the equilibrium position.

The actions of both buyers and sellers on the market may be related to the concepts of psychic revenue, profit, and cost. We remember that the aim of every actor is the highest position of psychic revenue and thus the making of a psychic profit compared to his next best alternative—his cost. Whether or not an individual buys depends on whether it is his best alternative with his given resources—in this case, his fish. His expected revenue in any action will be balanced against his expected cost—his next best alternative. In this case, the revenue will be either (a) the satisfaction of ends from the direct use of the horse or (b) expected resale of the horse at a higher price—whichever has the highest utility to him. His cost will be either (a) the marginal utility of the fish given up in direct use or (b) (possibly) the exchange-value of the fish for some other good or (c) the expected future purchase of the horse at a lower price—whichever has the highest utility. He will buy the horse if the expected revenue is greater; he will fail to buy if the expected cost is greater. The expected revenue is the marginal utility of the added horse for the buyer; the expected cost is the marginal utility of the fish given up. For either revenue or cost, the higher value in direct use or in exchange will be chosen as the marginal utility of the good.

The psychic revenue for the seller will be the higher of the utilities stemming from one of the following sources: (a) the value in direct use of the sale-good (the fish) or (b) the speculative value of re-exchanging the fish for the horse at a lower price in the future. The cost of the seller's action will be the highest utility forgone among the following alternatives: (a) the value in direct use of the horse given up or (b) the speculative value of selling at a higher price in the future or (c) the exchange-value of acquiring some other good for the horse. He will sell the horse if the expected revenue is greater; he will fail to sell if the expected cost is greater. We thus see that the situations of the sellers and the buyers are comparable. Both act or fail to act in accordance with their estimate of the alternative that will yield them the highest utility. It is the position of the utilities on the two sets of value scales—of the individual buyers and sellers—that determines the market price and the amount that will be exchanged at that price. In other words, it is, for every good, utility and utility alone that determines the price and the quantity exchanged. Utility and utility alone determines the nature of the supply and demand schedules.

It is therefore clearly fallacious to believe, as has been the popular assumption, that utility and “costs” are equally and independently potent in determining price. “Cost” is simply the utility of the next best alternative that must be forgone in any action, and it is therefore part and parcel of utility on the individual's value scale. This cost is, of course, always a present consideration of a future event, even if this “future” is a very near one. Thus, the forgone utility in making the purchase might be the direct consumption of fish that the actor might have engaged in within a few hours. Or it might be the possibility of exchanging for a cow, whose utility would be enjoyed over a long period of time. It goes without saying, as has been indicated in the previous chapter, that the present consideration of revenue and of cost in any action is based on the present value of expected future revenues and costs. The point is that both the utilities derived and the utilities forgone in any action refer to some point in the future, even if a very near one, and that past costs play no role in human action, and hence in determining price. The importance of this fundamental truth will be made clear in later chapters.