1. The Fundamentals of Human Action

6. Factors of Production: The Law of Returns

Since man wishes to satisfy as many of his ends as possible, and in the shortest possible time (see above), it follows that he will strive for the maximum product from given units of factors at each stage of production. As long as the goods are composed of homogeneous units, their quantity can be measured in terms of these units, and the actor can know when they are in greater or lesser supply. Thus, whereas value and utility cannot be measured or subject to addition, subtraction, etc., quantities of homogeneous units of a supply can be measured. A man knows how many horses or cows he has, and he knows that four horses are twice the quantity of two horses.

The law that such an optimum must exist can be proved by contemplating the implications of the contrary. If there were no optimum, the average product would increase indefinitely as the quantity of the factor X increased. (It could not increase indefinitely as the quantity decreases, since the product will be zero when the quantity of the factor is zero.) But if p/a can always be increased merely by increasing a, this means that any desired quantity of P could be secured by merely increasing the supply of X. This would mean that the proportionate supply of factors Y and Z can be ever so small; any decrease in their supply can always be compensated to increase production by increasing the supply of X. This would signify that factor X is perfectly substitutable for factors Y and Z and that the scarcity of the latter factors would not be a matter of concern to the actor so long as factor X was available in abundance. But a lack of concern for their scarcity means that Y and Z would no longer be scarce factors. Only one scarce factor, X, would remain. But we have seen that there must be more than one factor at each stage of production. Accordingly, the very existence of various factors of production implies that the average return of product to each factor must have some maximum, or optimum, value.

In some cases, the optimum amount of a factor may be the only amount that can effectively co-operate in the production process. Thus, by a known chemical formula, it may require precisely two parts of hydrogen and one part of oxygen to produce one unit of water. If the supply of oxygen is fixed at one unit, then any supply of hydrogen under two parts will produce no product at all, and all parts beyond two of hydrogen will be quite useless. Not only will the combination of two hydrogen and one oxygen be the optimum combination, but it will be the only amount of hydrogen that will be at all useful in the production process. 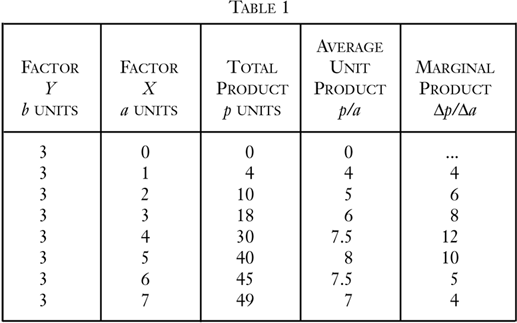 It follows that when the average product is at a maximum, it equals the marginal product.