11. Money and Its Purchasing Power

In chapter 3 above, we engaged in an extensive analysis of the individual's balance of payments. We saw there that an individual's income can be called his exports, and the physical sources of his income his goods exported; while his expenditures can be termed his imports, and the goods purchased his goods imported.42 We also saw that it is nonsensical to call a man's balance of trade “favorable” if he chooses to use some of his income to add to his cash balance, or “unfavorable” if he decides to draw down his cash balance, so that expenditures are greater than income. Every action and exchange is favorable from the point of view of the person performing the action or exchange; otherwise he would not have engaged in it. A further conclusion is that there is no need for anyone to worry about anyone else's balance of trade.

A person's income and expenditure constitute his “balance of trade,” while his credit transactions, added to this balance, comprise his “balance of payment.” Credit transactions may complicate the balance, but they do not alter its essentials. When a creditor makes a loan, he adds to his “money paid” column to the extent of the loan—for purchase of a promise to pay in the future. He has purchased the debtor's promise to pay in exchange for transferring part of his present cash balance to the debtor. The debtor adds to his “money receipts” column—from the sale of a promise to pay in the future. These promises to pay may fall due at any future date decided upon by the creditor and the debtor; generally they range from a day to many years. On that date the debtor repays the loan and transfers part of his cash balance to the creditor. This will appear in the debtor's “money paid” column—for repayment of debt—and in the creditor's “money received” column—from repayment of debt. Interest payments made by the debtor to the creditor will be similarly reflected in the respective balances of payments.

For example, suppose that we take the consolidated balance of payments for the Antlers Lodge of Jonesville for a certain period of time. There are three lodge members A, B, and C. Suppose their individual balances of payments are as indicated in Table 16. 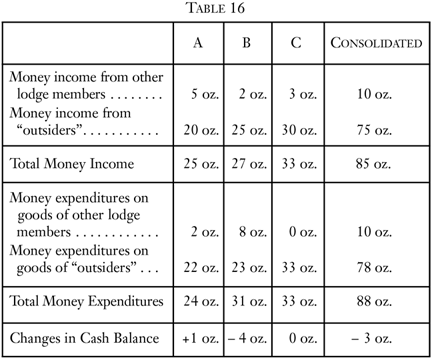 In the consolidated balance sheet of the Antlers Lodge, the money payments between the members must of necessity cancel out. Thus,

Fallacies in thinking about foreign trade will disappear if we understand that balances of payment are merely built upon consolidated individual transactions and that national balances are merely an arbitrary stopping point between individual balances on the one hand and the simple zeros of a world balance of payments on the other. There is, for example, the perennial worry that a balance of trade will be permanently “unfavorable” so that gold will drain out of the region in question until none is left. Drains of gold, however, are not mysterious acts of God. They are willed by people, who, on net balance, wish for one reason or another to reduce their cash balances of gold. The state of the balance is simply the visible manifestation of a voluntary reduction in the cash balance in a certain region or among a certain group.

Worries about national balances of payment are the fallacious residue of the accident that statistics of exchange are far more available across national boundaries than elsewhere. It should be clear that the principles applying to the balance of payment of the United States are the same for one region of the country, for one state, for one city, for one block, one house, or one person. Obviously no person or group can suffer because of an “unfavorable” balance; he or the group can suffer only because of a low level of income or assets. Seemingly plausible cries that money “be kept in” the United States, that Americans not be flooded with the “products of cheap foreign labor,” etc., take on a new perspective when we apply it, say, to a family of three Jones brothers. Imagine each brother exhorting the others to “buy Jones,” to “keep the money circulating within the Jones family,” to abstain from buying products made by others who earn less than the Jones family! Yet the principle of the argument is precisely the same in both cases.

Another popular argument is that a debtor group or nation cannot possibly repay its debt because its “balance of trade is in fundamental disequilibrium, being inherently unfavorable.” This is taken seriously in international affairs; yet how would we regard the individual debtor who used this excuse for defaulting on his loan? The creditor would be justified in bluntly telling the debtor that all he is saying is that he would much rather spend his money income and assets on enjoyable goods and services than on repayment of his debt. Except for the usual holistic analysis, we would see that the same holds true for an international debt.