11. Money and Its Purchasing Power

2. The Money Relation: The Demand for and the Supply of Money

Money is a commodity that serves as a general medium of exchange; its exchanges therefore permeate the economic system. Like all commodities, it has a market demand and a market supply, although its special situation lends it many unique features. We saw in chapter 4 that its “price” has no unique expression on the market. Other commodities are all expressible in terms of units of money and therefore have uniquely identifiable prices. The money commodity, however, can be expressed only by an array of all the other commodities, i.e., all the goods and services that money can buy on the market. This array has no uniquely expressible unit, and, as we shall see, changes in the array cannot be measured. Yet the concept of the “price” or the “value” of money, or the “purchasing power of the monetary unit,” is no less real and important for all that. It simply must be borne in mind that, as we saw in chapter 4, there is no single “price level” or measurable unit by which the value-array of money can be expressed. This exchange-value of money also takes on peculiar importance because, unlike other commodities, the prime purpose of the money commodity is to be exchanged, now or in the future, for directly consumable or productive commodities.

In contrast to other commodities, everyone on the market has both an exchange demand and a reservation demand for money. The exchange demand is his pre-income demand (see chapter 6, above). As a seller of labor, land, capital goods, or consumers’ goods, he must supply these goods and demand money in exchange to obtain a money income. Aside from speculative considerations, the seller of ready-made goods will tend, as we have seen, to have a perfectly inelastic (vertical) supply curve, since he has no reservation uses for the good. But the supply curve of a good for money is equivalent to a (partial) demand curve for money in terms of the good to be supplied. Therefore, the (exchange) demand curves for money in terms of land, capital goods, and consumers’ goods will tend to be perfectly inelastic.

For labor services, the situation is more complicated. Labor, as we have seen, does have a reserved use—satisfying leisure. We have seen that the general supply curve of a labor factor can be either “forward-sloping” or “backward-sloping,” depending upon the individuals’ marginal utility of money and marginal disutility of leisure forgone. In determining labor's demand curve for money, however, we can be far more certain. To understand why, let us take a hypothetical example of a supply curve of a labor factor (in general use). At a wage rate of five gold grains an hour, 40 hours per week of labor service will be sold. Now suppose that the wage rate is raised to eight gold grains an hour. Some people might work a greater number of hours because they have a greater monetary inducement to sacrifice leisure for labor. They might work 50 hours per week. Others may decide that the increased income permits them to sacrifice some money and take some of the increased earnings in greater leisure. They might work 30 hours. The first would represent a “forward-sloping,” the latter a “backward-sloping,” supply curve of labor in this price range. But both would have one thing in common. Let us multiply hours by wage rate in each case, to arrive at the total money income of the laborers in the various situations. In the original case, a laborer earned 40 times 5 or 200 gold grains per week. The man with a backward-sloping supply curve will earn 30 times 8 or 240 gold grains a week. The one with a forward-sloping supply curve will earn 50 times 8 or 400 gold grains per week. In both cases, the man earns more money at the higher wage rate.

This will always be true. In the first case, it is obvious, for the higher wage rate induces the man to sell more labor. But it is true in the latter case as well. For the higher money income permits a man to gratify his desires for more leisure as well, precisely because he is getting an increased money income. Therefore, a man's backward-sloping supply curve will never be “backward” enough to make him earn less money at higher wage rates.

Adding the vertical demand curves for money in the other exchange markets to the falling demand curve in the labor market, we arrive at a falling exchange-demand curve for money.

More important, because more volatile, in the total demand for money on the market is the reservation demand to hold money. This is everyone's post-income demand. After everyone has acquired his income, he must decide, as we have seen, between the allocation of his money assets in three directions: consumption spending, investment spending, and addition to his cash balance (“net hoarding”). Furthermore, he has the additional choice of subtraction from his cash balance (“net dishoarding”). How much he decides to retain in his cash balance is uniquely determined by the marginal utility of money in his cash balance on his value scale. Until now we have discussed at length the sources of the utilities and demands for consumers’ goods and for producers’ goods. We have now to look at the remaining good: money in the cash balance, its utility and demand.

Before discussing the sources of the demand for a cash balance, however, we may determine the shape of the reservation (or “cash balance”) demand curve for money. Let us suppose that a man's marginal utilities are such that he wishes to have 10 ounces of money held in his cash balance over a certain period. Suppose now that the exchange-value of money, i.e., the purchasing power of a monetary unit, increases, other things being equal. This means that his 10 gold ounces accomplish more work than they did before the change in the PPM (purchasing power of the monetary unit). As a consequence, he will tend to remove part of the 10 ounces from his cash balance and spend it on goods, the prices of which have now fallen. Therefore, the higher the PPM (the exchange-value of money), the lower the quantity of money demanded in the cash balance. Conversely, a lower PPM will mean that the previous cash balance is worth less in real terms than it was before, while the higher prices of goods discourage their purchase. As a result, the lower the PPM, the higher the quantity of money demanded in the cash balance.

There is a third demand curve for the money commodity that deserves mention. This is the demand for nonmonetary uses of the monetary metal. This will be relatively unimportant in the advanced monetary economy, but it will exist nevertheless. In the case of gold, this will mean either uses in consumption, as for ornaments, or productive uses, as for industrial purposes. At any rate, this demand curve also falls as the PPM increases. As the “price” of money (PPM) increases, more goods can be obtained through expenditure of a unit of money; as a result, the opportunity-cost in using gold for nonmonetary purposes increases, and less is demanded for that purpose. Conversely, as the PPM falls, there is more incentive to use gold for its direct use. This demand curve is added to the total demand curve for money, to obtain the total demand curve for the money commodity.2

At any one time there is a given total stock of the money commodity. This stock will, at any time, be owned by someone. It is therefore dangerously misleading to adopt the custom of American economists since Irving Fisher's day of treating money as somehow “circulating,” or worse still, as divided into “circulating money” and “idle money.”3 This concept conjures up the image of the former as moving somewhere at all times, while the latter sits idly in “hoards.” This is a grave error. There is, actually, no such thing as “circulation,” and there is no mysterious arena where money “moves.” At any one time all the money is owned by someone, i.e., rests in someone's cash balance. Whatever the stock of money, therefore, people's actions must bring it into accord with the total demand for money to hold, i.e., the total demand for money that we have just discussed. For even pre-income money acquired in exchange must be held at least momentarily in one's cash balance before being transferred to someone else's balance. All total demand is therefore to hold, and this is in accord with our analysis of total demand in chapter 2.

Total stock must therefore be brought into agreement, on the market, with the total quantity of money demanded. The diagram of this situation is shown in Figure 74. 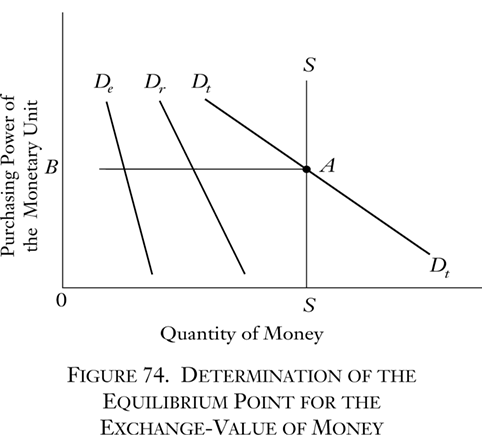 Dr is the reservation or cash-balance demand for money. Dt is the total demand for money to hold (the demand for nonmonetary gold being omitted for purposes of convenience). Somewhere intersecting the Dt curve is the SS vertical line—the total stock of money in the community—given at quantity 0S.

The intersection of the latter two curves determines the equilibrium point, A, for the exchange-value of money in the community. The exchange-value, or PPM, will be set at 0B.

Suppose now that the PPM is slightly higher than 0B. The demand for money at that point will be less than the stock. People will become unwilling to hold money at that exchange-value and will be anxious to sell it for other goods. These sales will raise the prices of goods and lower the PPM, until the equilibrium point is reached. On the other hand, suppose that the PPM is lower than 0B. In that case, more people will demand money, in exchange or in reservation, than there is money stock available. The consequent excess of demand over supply will raise the PPM again to 0B.