7. Production: General Pricing of the Factors

6. The Depletion of Natural Resources

One category has been purposely omitted so far from the discussion of land factors. At first, we defined land as the original, nature-given factor. Then we said that land which had been improved by human hands but which is now permanently given must also be considered as land. Land, then, became the catallactically permanent, nonreproducible resource, while capital goods are those that are nonpermanent and therefore must be produced again in order to be replaced. But there is one type of resource that is nonreplaceable but also nonpermanent: the natural resource that is being depleted, such as a copper or a diamond mine. Here the factor is definitely original and nature-given; it cannot be produced by man. On the other hand, it is not permanent, but subject to depletion because any use of it leaves an absolutely smaller amount for use in the future. It is original, but nonpermanent. Shall it be classed as land or as a capital good?

The crucial test of our classificatory procedure is to ask: Must labor and land factors work in order to reproduce the good? In the case of permanent factors this is not necessary, since they do not wear out. But in this case, we must answer in the negative also, for these goods, though nonpermanent, cannot be reproduced by man despite their depletion. Therefore, the natural resource comes as a special division under the “land” category.29

Table 15, adapted from one by Professor Hayek, reveals our classification of various resources as either land or capital goods.30 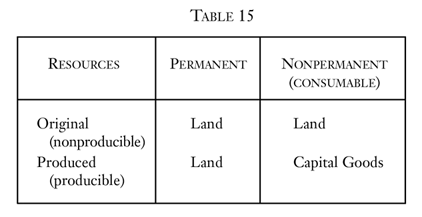 Hayek criticizes the criterion of reproducibility for classifying a capital good. He declares: “The point that is relevant ... is not that certain existing resources can be replaced by others which are in some technological sense similar to them, but that they have to be replaced by something, whether similar or not, if the income stream is not to decline.”31

But this is confusing value with physical considerations. We are attempting to classify physical goods here, not to discuss their possible values, which will fluctuate continually. The point is that the resources subject to depletion cannot be replaced, much as the owner would like to do so. They therefore earn a net rent. Hayek also raises the question whether a stream is “land” if a new stream can be created by collecting rain water. Here again, Hayek misconceives the issue as one of maintaining a “constant income stream” instead of classifying a physical concrete good. The stream is land because it does not need to be physically replaced. It is obvious that Hayek's criticism is valid against Kaldor's definition. Kaldor defined capital as a reproducible resource which it is economically profitable to produce. In that case, obsolete machines would no longer be capital goods. (Would they be “land”?) The definition should be: physically reproducible resources. Hayek's criticism that then the possibility of growing artificial fruit, etc., would make all land “capital” again misconceives the problem, which is one of the physical need and possibility of reproducing the agent. Since the basic land—not its fruit—needs no reproduction, it is excluded from the capital-good category.

The fact that the natural resources cannot be reproduced means that they earn a net rent and that their rent is not absorbed by land and labor factors that go into their production. Of course, from the net rents they earn the usual interest rate of the society for their owners, interest earnings being related to their capital value. Increases in capital values of natural resources go ultimately to the resource-owner himself and are not absorbed in gains by other land and labor factors.

There is no problem in capitalizing a resource that is subject to depletion, since, as we have seen, capitalization can take place for either a finite or an infinite series of future rental incomes.

There is, however, one striking problem that pervades any analysis of the resource subject to depletion and that distinguishes it from all other types of goods. This is the fact that there can be no use for such a resource in an evenly rotating economy. For the basis of the ERE is that all economic quantities continue indefinitely in an endless round. But this cannot happen in the case of a resource that is subject to depletion, for whenever it is used, the total stock of that good in the economy decreases. The situation at the next moment, then, cannot be the same as before. This is but one example of the insuperable difficulties encountered whenever the ERE is used, not as an auxiliary construction in analysis, but as some sort of ideal that the free economy must be forced to emulate.

There can be a reserve demand for a depletable resource, just as there is speculative reserve demand for any other stock of goods on the market. This speculation is not simple wickedness, however; it has a definite function, namely, that of allocating the scarce depletable resource to those uses at those times when consumer demand for them will be greatest. The speculator, waiting to use the resources until a future date, benefits consumers by shifting their use to a time when they will be more in demand than at present. As in the case of ground land, the permanent resource belongs to the first finder and first user, and often some of these initial capital gains are absorbed by interest on the capital originally invested in the business of resource-finding. The absorption can take place only in so far as the finding of new resources is a regular, continuing business. But this business, which by definition could not exist in the ERE, can never be completely regularized.

Minerals such as coal and oil are clearly prime examples of depletable resources. What about such natural resources as forests? A forest, although growing by natural processes, can be “produced” by man if measures are taken to maintain and grow more trees, etc. Therefore, forests would have to be classified as capital goods rather than depletable resources.

One of the frequent attacks on the behavior of the free market is based on the Georgist bugbear of natural resources held off the market for speculative purposes. We have dealt with this alleged problem above. Another, and diametrically opposite, attack is the common one that the free market wastes resources, especially depletable resources. Future generations are allegedly robbed by the greed of the present. Such reasoning would lead to the paradoxical conclusion that none of the resource be consumed at all. For whenever, at any time, a man consumes a depletable resource (here we use “consumes” in a broader sense to include “uses up” in production), he is leaving less of a stock for himself or his descendants to draw upon. It is a fact of life that whenever any amount of a depletable resource is used up, less is left for the future, and therefore any such consumption could just as well be called “robbery of the future,” if one chooses to define robbery in such unusual terms.32 Once we grant any amount of use to the depletable resource, we have to discard the robbery-of-the-future argument and accept the individual preferences of the market. There is then no more reason to assume that the market will use the resources too fast than to assume the opposite. The market will tend to use resources at precisely the rate that the consumers desire.33

Having developed, in Volume I, our basic analysis of the economics of the isolated individual, barter, and indirect exchange, we shall now proceed, in Volume II, to develop the analysis further by dealing with “dynamic” problems of a changing economy, particular types of factors, money and its value, and monopoly and competition, and discussing, in necessarily more summary fashion, the consequences of violent intervention in the free market.