GET NEWS AND ARTICLES IN YOUR INBOXPrint
A
A
Home | Mises Library | Malaysia: Muslim and Prosperous 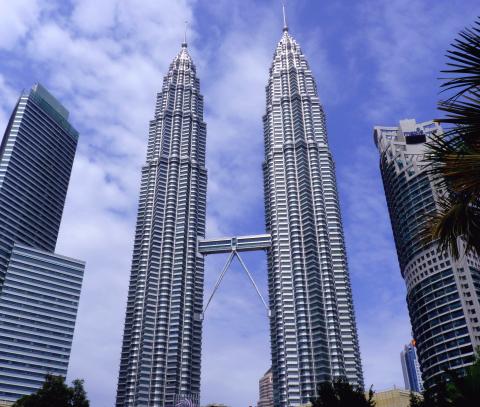 Prosperous, dynamic Malaysia is a country populated mostly by Muslims, a religion adhered to by a quarter of the world's population but which is widely seen in the West as wedded to an impoverishing system of economics and law.

Thus does Malaysia defy the stereotype, and underscore the universal effectiveness of market economies. It is now the tenth largest trading nation in the world. Its exports have grown from 1 to 100 billion dollars since 1963. Its economy has grown for 30 years with 7% average annual growth, with very varied agricultural and hi-tech manufactured exports. It has had a nearly 40% internal savings rate. GDP is nearly $10,000 per person for its population of 23 million. It is now also the U.S.'s tenth largest trading partner.

The top income tax rate is 29% but the average taxpayer pays 5%. The top corporate rate is 28 percent. Its monetary policy is stable, with inflation nearly flat for many years. Prices and wages are largely free, and property rights are protected. The government is heavily invested in financial markets and banking, mostly to benefit politically connected institutions.

Different races and religions (Malays, Chinese, Indians and native tribes in Borneo) all work and live in peace, each practicing their own religion and customs, having their own schools and much local autonomy. At our hotel we saw stunningly dressed Chinese women in miniskirts passing by demurely dressed Muslims and burka-clad Arab tourists visiting from Saudi Arabia with wide open eyes.

Race riots of the past are a distant memory, the last being in 1969. However, the government enforces affirmative action programs for the Malays. The Heritage Foundation Index of Economic Freedom reports that both foreign and domestic businesses must have ethnic Malay (Bumiputera) business partners with a share in the enterprise of at least 30 percent if shares are listed on the local stock exchange, and the U.S. Department of State reports that businesses must "have a workforce which reflects Malaysia's ethnic composition."

Chinese represent nearly a quarter of the population, and Indians are some 8%, but provide 20% of the lawyers and 15% of doctors. Any racially inflammatory news tends to be self censored in the major media and there is a conscious effort among all ethnic groups to work together. Free elections have been held since 1969 and the standard of living, in 1960 on the level of Haiti, now surpasses much of Eastern Europe and Latin America. Education represents over 20% of the national budget and tens of thousands of students are sent abroad.

One hundred thousand Malaysians have graduated from study in United States universities. Indeed America used to be so popular that the national flag is patterned on the American one, but with a crescent instead of stars. In foreign countries it is sometimes confused with the American flag.

At the American Malaysian Chamber of Commerce, AMCHAM, we were told that the legal system was one of the best in Asia, fair, accessible, and relatively fast. Company representatives said that there is no longer a fear that factories would migrate to China, although Malaysia has much higher wages. Its security, educated population, protection of property rights and common use of the English language make it very appealing for capital intensive investments. The Americans praised the Malaysians as being world class managers of factories and businesses and said that many were promoted to running multinational businesses in other nations as well.

However, they told us that U.S. companies were now losing business in several Asian nations because of Washington's foreign policies; specifically the Boeing representative confirmed this. A subsequent visit to Malaysia's national oil/petrochemical company showed us how Malaysian and European oil companies are taking away business from American corporations in many of the world's nations upon which Washington imposes trade sanctions (some 60 nations).

Asia is so dynamic that one can also question how much longer it will be dependent upon American consumer markets to thrive. Asking this question I was constantly told how important U.S. markets are (20% of Malaysia's exports for example) for Asian nations. But the question remains.

The government hosts various Muslim educational and political meetings in its promotion of moderate religious beliefs. For example, Mohammed said that Muslims must seek knowledge from other races and cultures, supported a rule of law and private property, and raised the status of women from conditions in his day. The Koran also is quite libertarian, according to , director of the Islamic Free Market Institute which helped coordinate the visit.

And it protects civil liberties. Caliph Omar, the Muslim ruler in Medina, a few years after the death of Mohammed, dismissed charges against a man arrested for drinking alcohol on the grounds that the police had broken three Muslim laws to enforce one. Namely, the Koran said not to spy on one's neighbors, not to enter homes without permission of the owners, and to enter only through the front door. In Saudi Arabia the Wahabi religious police regularly violate all three injunctions.

All police we saw had clearly visible, large name tags and often pictures too. When I asked about this, I was told that it was nationwide and applied also to bureaucrats in government offices. The policy is widely credited for curtailing petty corruption. Prostitution is not in open evidence and the two large hotels I visited had no adult videos, indeed of some 10 channels half were business-financial-news programs.

Sisters in Islam (SIS) publishes and teaches Mohammed's moderate views, particularly on the treatment of women. Indeed they report that he even helped his wife with the housework. For example the Koran says that a man can have 4 wives, but only if he treats them equally. The permission (and limit) came about in the Koran in reference to the adoption of orphans from Muslim men slain in warfare, not as a general condition.

Islam, they write, teaches self-control and self-discipline for men as well as women. At our meeting SIS directors told us they had influenced important legislation and were coordinating similar efforts in other Muslim countries. However, they feared growing divisions between Muslims and non-Muslims because of growing fundamentalism.

Fundamentalist Muslim beliefs have a strong constituency in the Northeast provinces bordering Thailand. The government has cracked down on extremist teaching which was going on in some Madrasa schools. Malaysian students have gone to Pakistan and Egypt for studies, but Malaysia itself has now become a major university country for other Asian nations, particularly China. It is low cost, safe, and upper level courses are taught in English. Wide knowledge of English (Malaysia was originally an English colony) makes the nation very attractive for foreign Muslim students.

However, fundamentalist Islam is growing. Many more people now comply with fasting rules and more and more women cover their hair. Veils are unusual, although the practice preceded Mohammed and is also used by many orthodox Hindus. In the Koran, there are only vague references to the need for head coverings and humility before God, but no description of what form this should take.

The international Muslim revival began after the Iranian revolution. Then fundamentalists gained support because they were seen as the only ones willing to stand up against Washington's dictates, e.g. on Iran, Iraq and Palestine. This was having the effect of pushing all Muslims to take a more independent anti-Washington stance and helping non-U.S. multinationals to take away business. However, the Americans said there was no threat to them and indeed very much good will to their local businesses from top government officials on down.

American executives at Amcham indicated a frustration with some Washington policies, one saying that Washington had "no real concept of how the world is changing." Also that the U.S. was now seen by Asians as becoming very self centered, having little care except for its immediate self interest, a policy which was undermining much good will towards America.

Both Malaysian officials and members of the American Chamber of Commerce told our delegation that criticism of the U.S. centered on two issues, actions violating or abandoning the international "rule of law" and the Israel-Palestine issue. The former affects all Asians and centered on the unilateral attack on Iraq and the U.S. abandonment of or opposition to many international treaties, e.g. nuclear proliferation, land mines, environment, war crimes and so on.

Another interview was with the Deputy Prime Minister Abdullah Badawi, expected to become the next Prime Minister replacing retiring long time leader Mahathir Mohamad. He said that Malaysia had had a long experience fighting terrorism from 1948 to '69 during its early years, that they were very concerned with extremist Islamic terrorism and combated it through consensus and education. Consensus, the Asian way, was slow and often resulted in postponing decisions, but it worked and had made Malaysia into a showcase of tolerance and prosperity. "We don't engage in torture or cruel punishments, but rather take time to persuade," he said.

Badawi said that the terrorists had tried to hijack Islam because of their wanting vengeance and for their social grievances, and that it was very important for the bridge between Islam and the West to have meetings and openly discuss problems. He too said that the most important issues were American unilateralism (meaning actions outside international law) and Israel-Palestine. He argued that as a small nation, Malaysia felt its interests were best protected by international law and that the U.S. should support an "equitable and just" international order for its own benefit as well as for the rest of the world.

Many commentators have asked the question of whether the West can really ever be at peace with Islam. Looking at Malaysia, the answer is clearly yes, provided governments permit market exchange and freedom of cultural contact, while avoiding imperial overreach and belligerence.