The Machinery of Justice 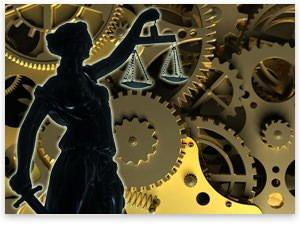 The state furnishes no machinery for arriving at justice. Even if it were possible under any circumstances to judge, and even though men were really criminals, the state has no way of arriving at the facts. If the state pretends to administer justice this should be its highest concern. It should not be interested in convicting men or punishing crime, but administering justice between men.

It is obvious to the most casual observer that the state furnishes no machinery to accomplish this result. The penal law simply takes a man into its hopper and grinds out a criminal at the end. A force of able-bodied, well fed, well paid men are kept busy in their search for crime. These find pecuniary reward in the crime of their fellows. An indictment is easily returned against a friendless man — a suspicion is enough in any case where the victim has no friends. If he is poor he is at once lodged in jail. Later he is placed on trial in the courts. When he steps into the dock both judge and jurors look on him as a guilty man — believe he has committed crime. He is carefully guarded by officers, like a guilty, hunted thing. Arrayed against him is an able prosecutor, well paid, and having personal and political ambitions dependent on the number of men he grinds into criminals. The prosecutor has ample means for the conduct of the case.

The prisoner, helpless enough at best, is rendered absolutely powerless to prepare his case by being lodged in jail. Without money he has no advocate with either the learning, influence, or ability to help his cause. If he is silent he is convicted. If he speaks no one believes his words. Innocent or guilty, it is a miracle if he escapes, and in this miracle the fact of his innocence or guilt plays but the smallest part. Given a few suspicious circumstances, a helpless prisoner, an indictment, and another victim is the sure result. And in the hands of a shrewd lawyer or under the belief of guilt, any circumstances are suspicious circumstances. Almost all acts are subject to various interpretations, and the guilt or innocence of a circumstance depends not upon the act but upon the mind that passes judgment on the act.

We look back with horror at the criminal courts of England, of Spain, of Italy, even upon our own Puritan judges who sentenced witches to death. These judges were doubtless as intelligent as our own. Their brutal, cruel judgments did not grow from a wicked perverted heart, but from the fact that they were passing judgment on their fellow man. These unjust judgments are the fruit of the cruel system of force and barbarism which clothes one man with the authority and power to condemn his fellow. All prosecutions are malicious, and all judgments are meted out in anger and hatred.

Our own judges are constantly showing this. In nearly every instance they condemn a prisoner to a term of servitude, and when passion has fled and the sane and holy feelings of mercy, of charity, of humanity once more regain their sway, they call on the pardoning power to rescind their cruel acts. In all these cases of pardons reflection shows the judges that the punishment meted out was at least too severe. The difference is in the frame of mind of the judge when engaged in the business of administering judgment, and when in the mood for listening to those feelings of human charity which are the diviner part of man.

Punishment, to in any way be justified, should diminish the sum of human misery, the result of the bitterness and hatred of men. But here, as everywhere else, punishment falls short. Wherever the judgment of courts enters it is to corrupt and to destroy. The misery and suffering entailed on man by scaffolds, racks, blocks, dungeons, and jails has never yet begun to be told. Blood and misery and degradation has marked the administration of punishment

Since man first penned his fellow men,
Like brutes, within an iron pen.

Let any reasoning being consider the tens of thousands who have been burned, and hanged, and boiled, and otherwise put to death for witchcraft; the millions for heresy; the thousands of noble victims who have suffered for treason; the victims of fire, of torture, of scaffold, of rack, and of dungeon, for all the conceivable crimes since time began. Let him consider the oceans of blood and rivers of tears shed by the force and brutality of the rulers of the world; the cruelty, torture, and suffering heaped upon the helpless, the weak, the unfortunate; and then ask himself if he believes that punishment is good.

Even could violence ever prevent crime, the brutality, suffering, blood, and crime of the rulers has towered mountain high above that of the weak and obscure victims whose wrongs they have pretended to avenge. And this cruelty does not abate. It is simple madness that doubts the justice of past condemnations and believes in the righteous judgments of today. No condemnation is just, and no judgment is righteous. All violence and force are cruel, unjust and barbarous, and cannot be sustained by the judgment of men.

But the evil of judgment and punishment does not end with the unfortunate victim. It brutalizes and makes inhuman all who are touched with its power. Under the influence of punishments, jailers, policemen, sheriffs, detectives, and all who deal with prisons are brutalized and hardened. The iniquities produced upon helpless prisoners leave their effects upon the captor as well as the captives. To witness the constant suffering and indignities of prison life is to destroy the finer sensibilities of the soul. Men who are otherwise kind in the various relations of life do not hesitate at cruelty to these despised prisoners whom the law has placed outside its ban.

To underfeed and overwork, to insult, degrade and beat are common incidents of prison life, and this, too, not because jailers are naturally cruel and bad, but because prisons are prisons, and convicts are outcasts. Instead of approaching these unfortunates as brothers in fellowship and love, their only concern is to make them feel that the heavy hand of the state has been laid upon them in malice and violence.

Clarence Darrow (1857–1938) was an attorney who, from experience, learned that the entire state apparatus of courts, trials, and prisons was the worst single feature of the state. For this reason, he became a radical, and he wrote Resist Not Evil as his manifesto.