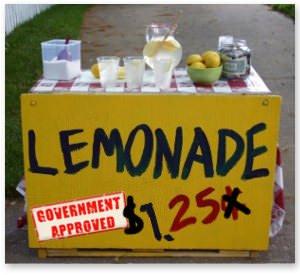 What do you do when life hands you lemons? If you're about to say "make lemonade," make sure you have a permit first or you might get an unwelcome visit from a government official. Last Saturday was Lemonade Freedom Day, which is a protest against governments shutting down — wait for it — kids' lemonade stands.

You've probably seen the stories about governments shutting down kids' lemonade stands. On reading about cases like this I'm sure a lot of people are asking whether the world is going mad or pointing out that the message the lemonade crackdowns are sending to the young is that our first and most important task is to obey regulations. While it isn't as if governments are waging articulated wars on lemonade stands, as a matter of principle this is worth thinking about.

Intervention turns everyone into an interventionist. Little Lucy Lemonade competes with firms that have jumped through a bunch of regulatory hoops. Exempting her from these requirements puts formal, registered, and regulated firms at a competitive disadvantage. The regulated incumbents develop Stockholm syndrome and start defending the regulators who are making their lives hard, or at least demanding that the regulators go after potential competitors (here's a clever cartoon that inspired me on this, and the original cartoon that inspired it).

One of the core ideas in economics is that people respond to incentives. When you regulate one activity, people will find ways to innovate around the regulations. Naturally, the government has to respond by regulating the new activity. And then people will innovate around that one, as well. And so it goes in the cat-and-mouse game of regulators and innovators.

One might ask whether starting down this sticky, sweet-and-sour slope toward an unregulated market in lemonade will mean allowing just anyone to open a lemonade stand, food truck, or other unregulated, informal business that will compete with brick-and-mortar incumbents. I don't see why it shouldn't. I'm not sure this is a bad thing, and instead of burdening innovators and entrepreneurs with existing regulations it might be a good idea to get rid of the regulations that would make it hard for incumbents to compete with upstarts.

One could also say that we can modify existing laws and regulations to accommodate kids, small-scale producers, and others, but in this case the real winners are the regulators (who get bigger budgets and more discretion) and lawyers (who enjoy greater demand for their services as they are the only ones who can navigate the resulting regulatory thickets). 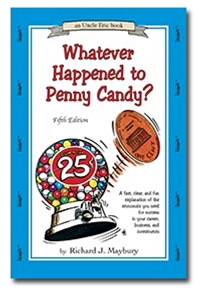 Another might object that we have to have these regulations. We say we regulate food service for safety reasons, but I’m not so sure. The vast majority of the meals I eat are prepared at home with no government supervision whatsoever. We keep a tidy house, but how do we know it's a "safe" place to prepare food? If safety is the goal, shouldn't we be stepping up regulation of home-cooked meals rather than concentrating on restaurants and their competitors? I would hope not.

Commentators are correct in pointing out that lemonade-stand shutdowns are sending potential entrepreneurs the wrong lesson: that innovation and experimentation are only okay if you ask permission. As entrepreneurship is the lifeblood of a successful economy, we will all pay a price over the long run. It may not seem like much, but Lemonade Freedom Day is a small-but-important exercise in civil disobedience.