The Inventor of the Digital Age 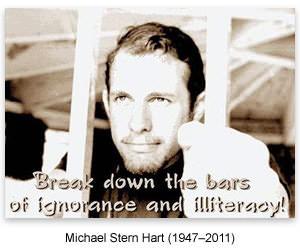 After he was permitted access to an Internet account at the University of Illinois as long ago as 1971, he had a mind-blowing revelation. He realized that this tool had the potential to universalize all knowledge. It could liberate ideas from their static existence on physical media and put them into a form that could be copied, copied, copied, and copied unto infinity, not just for today but forever. This was the Star Trek replicator. Amazing.

How is it possible, he wondered, that this tool exists and yet it is being kept under wraps, used only for the most superficial purposes and only by a few?

He grabbed a copy of the Declaration of Independence, typed it in, and posted it — despite being warned that this was not allowed, that he might crash the system, that there was just something wrong with letting ideas escape the small group that controlled them and allocated them to physical things only.

Bosh, he said. He would dedicate himself and his entire life to the universal distribution of anything and everything he could. Over the rest of his life, he ended up personally typing hundreds of books and distributing them.

His medium was and is called Project Gutenberg — a perfect name for his plan and agenda. Virtually alone, he saw that the Internet was the next stage. The whole history of publishing technology was about reaching ever more people with knowledge at ever-lower costs. This was the driving force at work in publishing for thousands of years, and the whole key to progress

The Internet was the next stage, even the final stage, the culmination of the efforts of every scribe, every inventor, every printer, every distributor, every teacher, every novelist, poet, intellectual, lecturer, orator, scholar.

For the first time in the entire history of the Earth, we have the ability for EVERYONE to get copies of EVERYTHING as long as it can be digitized and communicated to all of the people on the Earth, via computers [and the devices a person might need to make a PHYSICAL, rather than VIRTUAL copy of whatever it might be] …

Think about what you have just read for a moment, please, EVERYTHING FOR EVERYONE…

Hart had a mighty vision here. He grasped the magic and meaning of the power of infinite reproducibility, the earth-shaking significance of what it means to reduce the costs of duplication to near zero and to do so without any depreciation of the content itself. The invention of the printing press was a hinge of history; the Internet contained within itself the power to do the work of millions of scribes and millions of printing presses every single instant, forever and for everyone. The knowledge of 1 person could reach 7 billion and those 7 billion could all reach each other.

And so his own Project Gutenberg became his driving passion, the way he decided to gift his entire life to the whole of humanity. It began with plain text, nothing fancy. He urged that people copy these texts and publish them in whatever way possible. Today, the venture offers 36,000 books online for free, in many different formats.

It pioneered new ways to crowd source proofreaders. It inspired hundreds of thousands of volunteers. It anticipated the medium of ebooks 40 years in advance, a medium that is only this year being taken seriously by publishers and institutions.

Hart's writings reveal a man who stayed in a constant state of stunned amazement at everything that stood in the way of the dream. He gagged on institutions like copyright. He scoffed at the trillions being spent on higher education to teach the few at a time when we possess the means to school the entire globe. But he did more than just dismiss anything that stood in the way; he was himself a tireless example of how to proceed.

Hart's institutional children are everywhere today: Google Books, Kindle, Nook, Audible, Creative Commons, MIT's OpenCourseWare project, Khan Academy, Mises.org, and thousands of other sites, and not just for ebooks but also for painting, architecture, music, medical research, and every other field in art, commerce, and science. The word "knowledge" sums up the human experience; the Internet could embody that and flood the entire world.

When Gutenberg invented his press, consumers loved it. A frenzy of buying swept the German-speaking world. Psalters and bibles for everyone! But producers' guilds put up resistance. They complained of Gutenberg's rising wealth. Scribes feared the loss of their jobs. Critics complained of how people were becoming obsessed with reading instead of working.

It is no different today except that the producers' guilds and cultural worrywarts are allied with the state to stop the universal distribution of knowledge. Many rue the day that the first text was made available through the Internet, and dedicate themselves to ending the global frenzy to discover and learn. Our descendants will laugh, just as we find it funny that people tried to hobble the printing industry

Hart's life demonstrates the difference that one person's thinking can bring about in the shape of the real world. Without such thinking, the world would grind to a halt. Nothing new would ever happen. We would all do and think yesterday the same way we would think tomorrow and the next day, and history would have no direction, no guiding purpose, and life itself would be reduced to tedium and a pointless and endless rotation of hours, days, years, and generations.

But with people like Hart, people who not only imagine change but work super hard to bring it about themselves, humanity is lifted up, and the world rises ever more out of the state of nature.

To say that Hart was unreasonable he would have regarded as the highest compliment you could ever give him.

Requiescat in pace. If you don't know what that phrase means, where it comes from, what it is used for, you can look it up in about two seconds. Hart's vision makes that possible. He certainly deserves to rest in peace knowing of his gift to the human race.