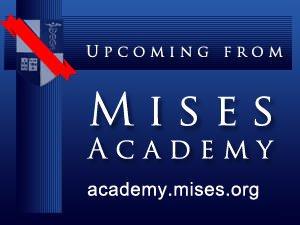 Prof. DiLorenzo discusses the class and the nature of American imperialism:

For generations, American students have been taught that their government was a constitutional republic and, as such, is truly “exceptional.” So-called American exceptionalism is contrasted in the classroom first with the imperialistic British Empire from which the original colonists rebelled. From there, the student learns that a war was fought against the Spanish Empire in the late nineteenth century, and against the monarchical empires of Old Europe in World War I. The fascist empires of Germany and Japan were defeated in World War II, after which the U.S. government commenced a new war against the Soviet empire. With the demise of the Soviet Union, American exceptionalism was once again invoked to impose democracy at gunpoint all over the world in the name of peace. Through all of this, the United States government selflessly pursued nothing more than peace and freedom for the peoples of the world.

This standard narrative, in which the United States is the perennial instrument of liberty, is a lie. We must ask ourselves how the world’s biggest opponent of imperialism (supposedly) has become the biggest imperialistic empire the world has ever known. How does an “anti-imperialistic” government end up with hundreds of military bases spanning the entire globe, with “military command centers” on every continent, even including an “African Command” operated out of Germany?

Was William Graham Sumner right when he argued in is 1898 essay, “The Conquest of the United States by Spain,” that America itself had finally evolved into an imperialistic empire not unlike the Spanish Empire? The answer to this question is “yes and no.” Sumner was right about the nature of the U.S. government as of the turn of the twentieth century, but his timeline was off. The road to imperialism began many decades earlier.

The War of 1812 ignited what Justin Raimondo has called “the virus of imperialism” in America. It was not a defensive war but an attempt to conquer Canada. The American Secretary of War predicted that no soldiers would be needed, that the appearance of a few American military officers would be met with cheers and flowers. The real result was a war in which the British burned down the White House and much of Washington, D.C. It also created an excuse to resurrect the hated Bank of the United States, impose massive taxation, high tariffs, and corporate welfare. “We never really did get back to the pre-War level of minimal State power,” wrote Rothbard.

The 1846 Mexican War was an imperialistic attack on Mexican sovereignty that was so bold that it even motivated the one-term Congressman Abraham Lincoln to speak eloquently in defense of secession.

In 1860 the Republican Party had plans for a continental empire (and beyond) funded by high tariffs and a national bank and littered with corporate welfare for railroad corporations, among others. Their first legislative success, during the 1859-60 Congressional session, was to more than double the average tariff rate at a time when tariff revenue accounted for more than 90 percent of all federal tax revenue. After the lower South seceded, threatening to foil the Republican Party’s imperialistic designs, Lincoln threatened “invasion” and “bloodshed” (his exact words) in any state that failed to collect the newly-doubled tariff tax in his first inaugural address. And he kept his word.

Then there was Woodrow Wilson, who “set the entire pattern for foreign policy from 1917 to the present,” according to Rothbard, with his utopian plans to recreate Europe at gunpoint in the name of “democracy.” If today’s neocons, who control American foreign policy, are anything, they are Wilsonian fanatics.

Beginning on the evening of Monday, September 9, I will be teaching a five-week online Mises Academy course on Imperialism and Anti-imperialism featuring the writings and ideas of such scholars as Ludwig von Mises, Murray Rothbard, Hans-Hermann Hoppe, Joseph T. Salerno, Thomas E. Woods, Jr., Randolph Bourne, Robert Higgs, William Graham Sumner, Joseph Stromberg, and Justin Raimondo, among others (including myself). The economic and political nature of imperialism will be discussed, followed by discussions of American imperialism in action. The fallacies of the contemporary arguments for never-ending war — that “democracies” supposedly never fight wars with each other — will be exposed and the consequences of this philosophy and policy examined. 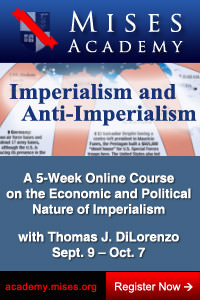 An important element of the course will be the study of the anti-imperialistic tradition in America — and in the world. This tradition acknowledges that, as Rothbard once wrote, “The State thrives on war ... expands on it, glories in it” as “the aggrandizement of State power crosses national boundaries into other States pushing other people around” as a sort of “foreign counterpart of the domestic aggression against the internal population.”

Or as Ludwig von Mises wrote, under imperialism, “the individual no longer has value. He is valuable to [the state] only as a member of the whole, as a soldier of an army.” And as a payer of ever-increasing taxes, I would add. The “imperialistic peoples’ state,” Mises wrote, has a “lust for conquest” that is “unlimited,” and “foreign peoples are in its eyes not subjects but objects of policy.” Is there a more precise definition of American foreign policy over the past century?