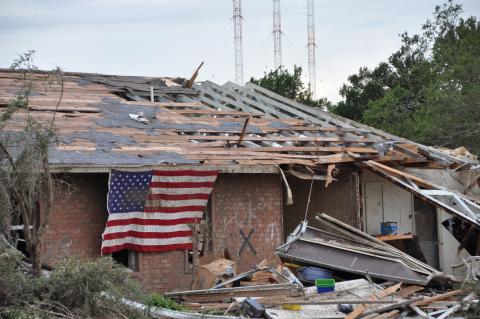 You might have thought it was a bad thing that Hurricane Floyd caused loads of property damage, flooded whole towns, interrupted commutes, and generally mucked everything up. This is a fair assumption. But it is one to which economists are sometimes blind.

It never fails: after some natural disaster an economist pops up to reassure folks that there is an upside. All the rebuilding that takes place actually provides an overall production benefit.

The carpenters, water-pumpers, roofers, and building suppliers all enjoy business they would otherwise not have. The money they make will be spent on other goods. All this new activity gives the economy a shot in the arm, and even boosts GDP.

Lest you think I am setting up a Keynesian straw man, consider the Wall Street Journal’s September 17, 1999, story: "Hurricane Floyd May Leave Robust Economy in Its Wake." Marilyn Schaja, chief economist at Donaldson, Lufkin & Jenrette Securities Corp. in New York, tells a gullible journalist that the storm "may actually give the economy a boost."

"Despite property damage and unproductive hours in emergency shelters," the story goes on to report, "rebuilding and replacement of goods apparently helped to buoy the local economies. Ms. Schaja expects Floyd, which has steered clear of any major population areas, to leave a similar legacy, lifting annual GDP by 0.2%."

Instead of weeping about Floyd, according to this logic, we should be celebrating. Maybe we need more natural disasters, not fewer. Can someone invent a machine that will flood all our towns and destroy all our houses? Should we also cheer vandalism and mayhem in general? Maybe the violence of the Indonesian military is actually good for East Timor.

Maybe, too, the destructive effects of taxation–a sure destroyer of private property–are good for us too. Finally, if a hurricane is good for the economy, what about the vast looting machine called the federal government that extracts nearly $2 trillion from the private sector every year?

The fallacy is easy to detect. You can’t just consider the money spent on rebuilding. When calculating the costs of something, you have to consider the alternative uses of resources. Instead of repairing your storm-damaged roof, you might have saved the money for investment. Instead of paying higher insurance premiums wrought by the storm, you might have used the money to improve your standard of living. The cash paid out for rebuilding is always a second best use of resources.

Economists call the failure to see this the "broken window fallacy," after a parable first told by 19th-century French economist Frederic Bastiat and then retold by Henry Hazlitt in Economics in One Lesson (1946). In the story, a boy throws a rock through the window, and the onlooking crowds debate the meaning of it all. The crowd concludes that it was actually a good thing the glass was broken. They wallow in this fallacy until a real economist shows up to confirm their first intuition that property destruction always makes people worse off than they were before.

Once you discover this, you can dispense with a wide variety of Keynesian policies. When resources are used for uneconomic purposes (funding the welfare-warfare state, for example), there is no "multiplier" that makes up for the costs of the initial destruction (e.g. the taxes that were extracted to pay for the goods or services). Government spending doesn’t "spur" economic growth; it only diverts resources from more desirable to less desirable uses.

Sadly, the manner in which the GDP is figured tends to disguise the costs associated with economic destruction. For one thing, you can’t add and subtract what you can’t see, and most of the costs of a hurricane (or a government) consist in goods not produced and services not provided. In addition, the GDP only calculates money spent and resources produced, even when there were better economic alternatives.

So the hurricane may cause the GDP to rise. But that is not the same thing as causing prosperity to rise. The GDP is a fiction created by government statisticians, and it builds in a bias towards disguising the costs of government and overcounting its benefits. For example, it doesn’t count the costs associated with taxation.

Hurricane Floyd not only produced property destruction, it also unleashed totalitarian political sentiment. Every mayor and governor in the affected areas went on television to denounce the supposed gougers in the insurance, motel, and gasoline business who would use this tragedy to raise prices. The truth is that natural disasters create additional demand in the face of a short supply of a whole range of goods and services. The price system is the market’s way of responding to the new realities. Controlling prices and insurance premiums can only increase shortages and prolong misery.

If it is real gougers we are looking for–people who would use tragedy to advance themselves and their fortunes–look no further than the political class. Bill Clinton used the occasion to grandstand about the saving power of the feds, and his statements led to the largest and most unnecessary mandatory evacuation in the American history. Three million people were tossed out of their homes to face grueling traffic without food or water. The looters who stayed behind were assured a free ride.

Are mandatory evacuations ever necessary? Only if we believe that government is somehow capable of discerning risks to lives and property that people themselves cannot see. Clearly, the experience with Floyd, which didn’t come close to its terrifying billing by the government spokesmen, demonstrates that they cannot. In a free country, mandatory evacuations should never be allowed. People should be allowed to decide for themselves whether to leave or stay.

In the end, it was government and not the hurricane that ended up being the worst threat. And that threat is just beginning. The pork will flow to all affected areas, swelling the size and power of political establishments loyal to the party in power. This is a discernible and calculable threat, one best met by a mandatory evacuation of that nest of looters we call the federal government.

September 23, 1999 Reuters report concerning the effect of the great Taiwanese earthquake on their economy:

"A giant earthquake forced Taiwan to trim its 1999 economic growth target to 5.5 percent, but officials said on Thursday a post-quake reconstruction boom should drive growth beyond six percent in 2000."

"... the earthquake, which measured 7.6 on the open-ended Richter scale, would have a positive effect in 2000, with reconstruction stimulating domestic demand, said Chang Yao-tsung, the [economic] ministry's chief statistician."

"The GDP forecast is expected to be revised downward to 5.5 percent for this year due to the earthquake, but reconstruction efforts should help GDP grow more than six percent in 2000," Chang told reporters.

It looks like killer earthquakes are good for the economy too.

[Thanks to David E. Cohen for the Taiwan report]