GET NEWS AND ARTICLES IN YOUR INBOXPrint
A
A
Home | Mises Library | Is High School Football a Public Good? 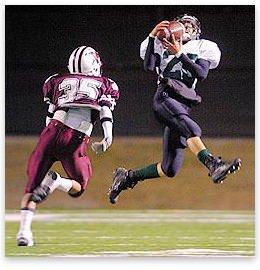 Most of us would never think of asking our neighbors to foot a personal bill. We accept responsibility for car and roof repairs as ours alone. In addition, we don't bang on the door across the street in order to demand a contribution towards our children's figure skating lessons, taekwondo classes, etc. That which is consumed or used by our families is to be paid from our pockets — the definition of personal responsibility.

Now let's change the situation slightly. Instead of a figure skating lesson — the realm of the private good, consider the local public high school football team — the realm of the supposed public good.[1] The technical definition of a public good — a good that is nonexcludable, nonrivalrous, subject to free riders, and hence will only be provided by government through coerced tax dollars — has been corrupted in the modern lexicon to mean anything that is perceived to benefit society in general, no matter how specious the benefit argument.

Instead, the collectivist definition — the vacuous, yet now standard, definition — applies the general welfare argument to elevate football from a private activity to that of a public good. The argument goes something along these lines: football is beneficial because it prepares boys for adulthood, keeps them off the streets after school, and provides them with a place where they can excel.

The public goods argument as currently stated says that the benefits that accrue to the child also accrue to society in general. In this collectivist view, raising children is the role of society since society benefits when it's done right — a better work force — and suffers when it's done wrong — more crime and criminals.

But this argument can be applied to almost any expenditure that parents make while raising their children. Better to be jumping on ice or practicing a roundhouse kick than to be out loitering on street corners. Why limit the concept of public goods to football, basketball, baseball, softball, etc? Based on recent history, it is only a matter of time before public goods subsume more activities, with the costs spread over the community in the form of increased taxes: the complete socialism of parenting.

The problem with the concept of public goods is that it misdirects the debate. In modern society, every action I take has a perceived positive or a perceived negative external effect on other members of society, and most of the time there are perceived positive and negative external effects occurring simultaneously. When I mow my lawn, one neighbor perceives the noise as a negative — reducing calm and tranquility — while another neighbor perceives my well-kept lawn as a benefit — invoking calm and tranquility.

I use the qualifier "perceive" because the whole public goods argument for coerced funding of football teams is based on the perception of the observer. The parents of the football player, the player himself, as well as local high school football fans, perceive the team and games as a positive for the community. Some say that it benefits the kids, while others say it strengthens the community. Both views see tax-funded sports, football in particular, as a winner for the community.

Yet the parent struggling to make ends meet each month, the retiree living on an inflation-robbed pension, the lover of freedom, etc., see their ever-increasing tax bill as a negative. For the parent, a child's dental appointment goes wanting for the sake of the football team; for the retiree, the higher tax bill comes at the cost of a colder house in the winter; for lovers of freedom, additional money lifted from their wallets is another slap in the face by collectivists.

So, who supports sports on the public dole? It's not just young athletes, their families, and fans; the school system is the biggest winner. When a new sport is added to a school's program, a new dependent constituency is created. Where lacrosse used to be the private responsibility of player and parent, it has become the public good funded by the community's tax dollar. The lacrosse bill is now split between parent and neighbor. And, the threat of withdrawal of the tax-funded, school-district-redistributed, funding source frightens the parents of athletes into action. They rally behind the schools for tax increases, no matter the reason, no matter the amount.

Sometimes the actions are overt, such as a school district stating that parents of athletes should support an operating levy since the additional tax dollars are less than the cost of sports — a cost that would be borne by the parents of athletes should the levy fail at the ballot. If every homeowner is forced to pony up an additional $500 in property tax, the parents won't have to pay the $550 in per-child athletic fees. By stating the need in this manner, the public school system admits that it engages in theft and redistribution as it takes tax dollars from homeowners to pay for bills that are the personal responsibility of those directly consuming the good or service: football parents and players in this case. Of course, the concept of public goods provides the cover of "doing it for the kids" and "community pride" so the parents can feel good about their theft through the ballot box.

Ask your friends and neighbors if they are willing to split the bill for your child's taekwondo class. Not through some sort of fund-raising activity, but a simple splitting of the bill; fifty-fifty. Go ahead. Most of us would be too proud to even consider asking that question; we wouldn't want to be seen as begging for money. Yet in a collective sense, we accept the same means through the ballot box.

Those who push for additional taxes to benefit high school sports are not the champions of a greater good. No, they are simply bandits using more accepted means to force their neighbors to split the bill. Asking is seen as inappropriate; coercing is celebrated.

Public goods are a cover for coercion, and public high school football is a private good funded by someone else's tax bill. Don't believe otherwise.

[1] Of course, football at private schools or through private leagues is a private good.