Who could possibly claim that buying up drivable used cars at prices far in excess of their market value, for the express purpose of destroying them, will be beneficial for the economy or the planet? You guessed it: a combination of economy-saving politicians and earth-saving green activists are peddling the wonders of a new government program popularly known as "Cash for Clunkers." The Consumer Assistance Recycle and Save Act of 2009 has the two ostensible goals of jump-starting the stalled automobile industry and combating global warming (or climate change, or whatever they're calling it these days) by replacing old, gas-guzzling smog machines with new, more fuel-efficient, cleaner cars.

Here's the gist of how CARS (Car Allowance Rebate System) is supposed to work: owners of older vehicles can bring them to a dealership where they will be offered a refund of up to $4500 — supplied entirely by the government — towards the purchase of a new vehicle. The main catch is that the new vehicle must have a certain miles-per-gallon rating higher than the old vehicle, and the dealer must certifiably crush (yes, destroy) the old vehicle so that it can never pollute again.

Of course, there are many conditions and rules attached to the program, designed to prevent someone like me from buying a beat-up 1960s truck from the neighbor's farm for 100 bucks and installing a fuel pump, spark plugs, or whatever else necessary to get it running for an extra 50 or so, then driving it into town for a cool $4500 rebate on a brand new Dodge diesel. Chiefly, the clunker can't average more than 18 miles per gallon or be more than 25 years old (darn), and the person trading it in must show proof of registration and insurance for at least one year (double darn). The bribe — er, refund — then varies based on the improvement achieved in miles per gallon rating. For a complete rundown of the Byzantine rules, regulations, and restrictions, see the official website's FAQ.

Now, if "Cash for Clunkers" immediately brings to mind the broken-window fallacy, good on ya: you have a solid grasp of one of the most important lessons of economics. How could it possibly help overall material prosperity to overpay for used cars and then pay even more for people to destroy them, all the while also paying bureaucrats to ensure it is all done properly? The answer, of course, is it won't. There will be fewer "clunkers" available (with the really cheap ones disappearing first); there will be distortions in the used car and used car parts markets — it will be more difficult and more expensive to source used parts for the junker you want to work on — and there will be a whole new bureaucracy to manage the program, and so on.

To highlight just one instance of the outrageous economic distortion this silly program is sure to bring, consider the fact that most of the clunkers that qualify for the program are driven by relatively poor folks, people who are not very likely to be in a position to buy a new car even with the help of government refunds. I would venture to guess that these people rely on clunkers to a much greater extent than upper-middle-class suburbanites who can afford more reliable cars and who might own a clunker here or there as a spare, seldom-driven car. Yet these upper-income folks are far more likely to cash in on the artificial government refund value of clunkers, thus withholding their vehicles from the used car market and raising their prices. In the limit, clunker prices will climb as high as the potential refund value minus registration, insurance, and miscellaneous transaction costs, thus making basic transportation more expensive for the poorest elements of society.

As much as the cash-for-clunkers absurdity smacks of the broken-window fallacy, I see its deeper economic relevance as an example of rent-seeking behavior along the lines of the "Bootleggers and Baptists" model.

It's no secret that the harsh reality of market forces has upset the auto industry. Yet many in that industry, especially new car dealers, are turning to politics for a quick and easy fix instead of gritting their teeth or throwing in the towel. Under the all-too-common rhetoric of stimulus, they're pleading to the politicians: "Please, concoct a scheme to bribe people into buying new car. Oh, and make sure you extract the bribe funds from someone else!"

Yet even in politics, naked bribery and extortion are frowned upon. What's needed is a cover story. Enter the ubiquitous green lobby with their own plea: "Please, concoct a scheme to bribe people to 'go green' and replace those nasty polluters with earth-friendly eco-wagons." All you need now is an entrepreneurial politician[1] to package the deal, auto-industry and green-activist lobbyists to promote it, and even (gasp) economists, and smash! Another pane of economic — and moral — sense is shattered in the name of green stimulus. 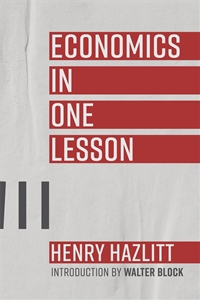 To cast this in terms Bastiat might use, it's as if the glazier hired a street urchin to hurl bricks through shop windows by night, in the midst of a social crusade against the dangers of toxic, low-tech glass. The greed of those elements of the auto industry that endorse this plan, combined with the self-righteous conceit of the greens, makes for a politically potent combination. Disappointed car makers and greens alike, not satisfied with the economizing actions of individuals operating under free choice, are attempting to force the rest of us to re-economize along their preferred margins. This is green tyranny at its worst: waste, distortion, and violating liberty in the name of "saving the planet."