GET NEWS AND ARTICLES IN YOUR INBOXPrint
A
A
Home | Mises Library | Go for Capitalism or Go for Broke? 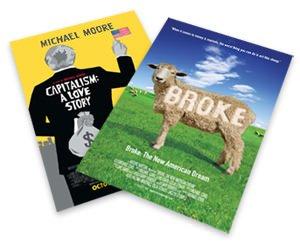 Two documentaries have recently been released about the current economic crisis. The first is Michael Moore's film, Capitalism: A Love Story and the second is Michael Covel's Broke: The New American Dream.

Two Michaels, two documentaries, and two very different messages, duking it out for dominance in our hearts and minds.

True, when it comes to pure marketing and distribution muscle, Moore's wins out. His film is playing in every major theater across the country, further indoctrinating our culture about the "evils of capitalism." Covel's film, on the other hand, was not as popular with the film-festival crowd — particularly in light of the fact that he is a self-proclaimed government-out-of-my-bedroom-and-out-of-my-pocketbook libertarian with a strong admiration for Ludwig von Mises.

But when it comes to message, there is not much denying that Covel wins the debate. OK, maybe there is some denial, but let's take a closer look at the key differences between Capitalism and Broke.

The first obvious difference is between the documentarians themselves. Let's face it: the guy on our side is not only fit and tall, he's also infectiously upbeat and optimistic. Moore has an entirely different profile, not just physically but stylistically: his films tend to have a tint of bitterness and guillotine-style vengeance to them.

The second difference is the message. Moore works his typical postproduction magic to portray horrific tales of the evils of capitalism. But as Thomas More predicted in his famous Utopia, such an argument will always leave the audience asking more questions. The first question on the list being, What does he propose to replace it with? Socialism?

Second question: Where is the money going to come from?

Moore's film contains a plethora of convincing sob stories, from people being "forced" to leave their homes because they can no longer pay the mortgage, to a commercial pilot who has to rely on food stamps. But he never explains how this happened. Only that capitalism is to blame.

He brings in a group of Catholic priests to confirm his sweeping statements about capitalism. Again, no explanation, just blame.

In fairness to Moore, he does make some good points. His film opens with clips of various bank robberies, which he likens to the governments' looting of the taxpayers. No stranger to theatrics, Moore also shows up at the Goldman Sachs headquarters in an armored bank truck. Holding a white bag with a dollar sign on it, he tells the security guards that he is there to reclaim the $10 billion in taxpayers' money. Bailouts, taxation, and corporate favoritism are things that we Austrians criticize all the time.

The difference is that Moore equates these things with capitalism. What he is referring to is corporatism, or economic fascism, not free-market capitalism. But it makes no difference. To Moore, it's "just" semantics.

Covel, on the other hand, walks us through large concepts and ideas. Everything is transparent, simple, and clear. He begins with a quick synopsis of what led to our current situation: the Fed lowered interest rates to get us out of the dot-com crash and so money was cheap, which led to the subsequent housing boom.

He chooses a few key points to talk about, such as the social-security system and the lottery as secret taxes on the "poor," to illustrate his point that we, like sheep, blindly trust authority figures who may not have our best interest in mind.

Michael Covel's film is not overly dogmatic and he does not seek to control the debate or manipulate facts. Rather, his aim is to plant seeds and to encourage the viewer to question the idea of the government as our savior or the concept that we can spend our way to prosperity. He assumes that the viewer has sipped a Starbucks coffee or bought a new pair of Nike sneakers — or indulged in a large bucket of popcorn while going to a Michael Moore documentary — and has enough common sense to know that capitalism isn't all bad.

He wants viewers to explore on their own, not just take his word for it.

The third difference is who each documentarian blames for the financial crisis and what they think we should do about it. Moore, of course, blames the greedy capitalists first and foremost. But he also blames Ronald Reagan — who he believes "presided over the destruction of our country" — and the "crazed right-wingers at the town-hall meetings."

His cure? It is probably best summed up by the long-lost newsreel he uncovers in the final scene of the movie. It was a portion of FDR's State of the Union address, given on January 11, 1944, in which he proposed a Second Bill of Rights consisting of

Throngs of young people all over this country now believe that freedom has come to mean all things free: free healthcare, free education, free money!

To top things off, Moore declares, "I love being in America, I love being an American." The danger in this statement is that it makes viewers think that America can be whatever the voters want it to be. Not true! America is an idea that was written down on paper by our founders a little over two hundred years ago. Hate that idea and you hate America.

Covel's film is unique in that he doesn't blame someone else — even legislators or the government. Sure, he explains the problems with over-regulation and government intervention. But at the end of the day, he just blames himself. And asks us all to do the same. He tells us that going on a witch-hunt may be fun, but the reality is that nothing will change until each of us begins with ourselves.

We are all to blame. After all, we choose our government, we trust the media, we want out of recessions quickly and painlessly — despite the potential long-term effects — and we trust that the things Michael Moore says are true.

Ironically, you would think that a film called Broke: The New American Dream would be pessimistic and depressing, while a film called Capitalism: A Love Story would be upbeat and positive. The opposite is true. 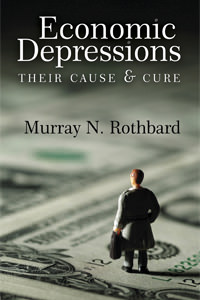 Covel's film ends on a hopeful and empowering note. He tells us that we all have the power to change our world, but that change begins with each of us taking personal responsibility.

Moore's film, on the other hand, presents the negative message that the only way out of this mess is to tear others down. He sarcastically calls America's experiment with capitalism a "love story." But his solution is to replace it with a system of warfare between the classes, the sexes, and the races under the guise of "brotherly love." Go figure!

This is the only time that I will ever say that I would rather go for Broke than for Capitalism.