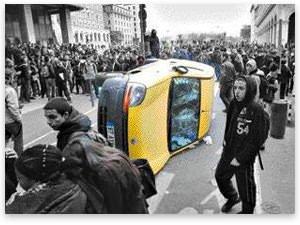 Images of angry French students burning vehicles and demonstrating in the streets fill the world's TV screens. Sadly, several young demonstrators have been seriously injured. French youth may be gathering in the streets, and yet the fight is not over education or job-training policies but about a pension reform that postpones retirement.

To save the pension system, the French parliament is about to pass a law that forces workers to postpone retirement by two years. In an unlikely alliance, high school (lycée) and university students have joined France's powerful public unions in protesting the reform. Meanwhile, oil workers strategically blocked the country's refineries, creating a nationwide fuel shortage to force the government to rethink its policy. French media interviews reveal older workers are loath to accept later retirement, while students fear job losses if older workers are forced to postpone retirement.

Given French politics and the global financial crisis, (d) and (e) are unlikely. That leaves the first three options.

To prevent a $13 billion annual deficit from surging to a projected $123 billion by 2050, President Sarkozy chose the first option and decided to push back the retirement age. The French parliament is all but certain to follow, raising the minimum retirement age from 60 to 62, and the age to qualify for a full pension from 65 to 67. Older workers are right to recognize the very real cost of the increased workload implied by this pension reform.

At first glance, students' fears also seem warranted. If an older worker is forced to work an extra couple of years, it seems obvious this would delay a young person's entry into the labor force. If we assume there are a fixed number of jobs, the net effect would be to crush employment opportunities for young people. With youth unemployment already absurdly high — over 20 percent — it's no wonder students spilled out onto the streets to protest.

However, the fact that students are in the streets demonstrating against this particular pension reform suggests professors and politicians deserve an F — they have failed to explain what economists call the lump-of-labor fallacy. Jobs are not fixed and do not depend exclusively on the supply of labor. Instead, they are principally derived from domestic and global demand for French products (wine, perfume, computers, cars, etc.) and services (tourism, medical services, management consulting, banking, etc.). The underlying reason for youth unemployment has — and will continue to have — much more to do with bad labor-market policies that limit job growth, rather than pension reform.

There are a number of reasons young people should instead be celebrating France's pension reform. Although they may work longer, young people need to realize they will live longer. The net effect is that their retirement years are likely to at least match those of their parents.

Consider a likely alternative to the current reform. Suppose that instead the government decided to raise taxes. This would crush economic activity and job creation. In fact, the biggest burden would fall hardest on future workers — the students demonstrating today.

A bulge of baby boomers is heading into retirement. With a pay-as-you-go pension system, this leaves fewer and fewer young people paying pensions. This means they will eventually be forced to pay a much greater fraction of their income. If young people balk at paying more than the 50 percent overall tax rates their parents currently pay, then the only choice that remains is to reduce benefits.

As a result of the French government's decision not to raise taxes and instead to postpone retirement, young people face lower future taxes than they otherwise would. This also ensures they will enjoy greater job opportunities since businesses also benefit from no new taxes.

Instead of protesting this pension reform, young people should celebrate pension reform. It reduces the future burden on today's young, and creates new and better job opportunities.

Perhaps most importantly, by reducing government debt (unfunded liabilities), pension reform not only guarantees better bond ratings, but by satisfying the Maastricht treaty it also signals the world that France is committed to more stable and responsible fiscal (tax and spending) policies. This is a key component of the security that entrepreneurs seek to launch new companies, and thus it encourages business formation and job creation. The other key component is labor-market policy.

If students are inclined to protest, they should consider demonstrating against job-destroying mandates, restrictions, rules, and regulations that heavily bias employers against hiring young people. They should also demonstrate in favor of liberalizing the economy and completing the Doha Development Round. Increasing trade and making France an attractive destination for foreign investment guarantees job growth. Completing the Doha trade round would be the best jobs program for France — and for the world.

It's important for French students to take a step back. They may be fighting the wrong battle. Young people should celebrate pension reform. If they feel a need to demonstrate, they should attack France's labor-market policies and promote freer trade.

François Melese is professor of economics and deputy executive director of the Defense Resources Management Institute (DRMI) at the Naval Postgraduate School in Monterey, California.