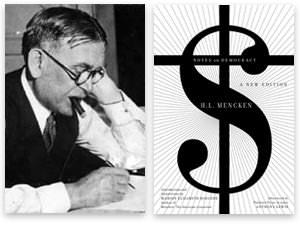 Democracy spoke loudly last November with voters putting Barack Obama in the White House and providing Democratic majorities for Harry Reid and Nancy Pelosi to preside over. After eight years of George W. Bush, American voters wanted change — so we heard over and over again. But after the first 30 days, with plenty of crisis to fix, the Obama administration looks like Bush part deux: more bailouts, more wars, bigger government. How could 125 million voters not end up with the change they overwhelmingly voted for? After all, "Down there, one hears, lies a deep, illimitable reservoir of righteousness and wisdom, unpolluted by the corruption of privilege."

Of course, no one today would write so disparagingly about the collective electorate. After all, the American taxpayer foots the bill to spread democracy far and wide. People who don't have the slightest interest in the collective wisdom of the common herd electing their leaders are having it forced upon them at gunpoint by Uncle Sam. Today, Americans believe it is the best thing going. The words above are from a man who had his doubts: H.L. Mencken.

Back in the 1920s, Mencken was influencing a generation of educated people. He was a journalist, satirist and social critic, a cynic and free thinker, known as either the "Sage of Baltimore" or the "Bad Boy of Baltimore." As well known and influential as he was in the 1920s, Mencken is sadly unfamiliar to many educated people today. And even though he passed in 1956, Mencken knew where America was headed long before today. Writing in the Baltimore Sun back in 1937, Mencken believed that, by now, "the incurable idiots may conceivably constitute an absolute majority of the population."

Mencken wrote mountains of material and all of it is stunningly good. It was a wonderful day when Murray Rothbard recommended that I read anything by his favorite author, Mencken. And although it is hard to pick a favorite book of his, for me, Notes on Democracy is his best, perhaps because there is no bigger sacred cow than democracy. Contemporary commentators equate freedom with democracy. But modern America gets less free every day because of it. For Mencken, democracy was a wonder to behold: "I do not believe in democracy, but I am perfectly willing to admit that it provides the only really amusing form of government ever endured by mankind."

Originally published in 1926, with a reprint in 1977, Notes on Democracy has been hard to find for many years. Dissident Books has changed all that with a brand new edition that not only contains Mencken's sparkling prose but an illuminating introduction from Mencken expert Marion Elizabeth Rodgers, author of Mencken: The American Iconoclast. Rodgers has devoted her adult life to the study of the Sage of Baltimore and her biography provides the most complete look at Mencken yet.

Rodgers also provides annotations to Democracy that are to, as the editor points out, "identify names, places, and events and to clarify otherwise obscure allusions." Any younger (or older) readers who have tried Mencken before and were scared off by the number of unfamiliar references will appreciate not only the clarity but also the extensive historical background these annotations provide.

Mencken divides the book into four unequal parts, beginning with Democratic Man, which discusses the common citizen or voter. The proletarian "is never dangerous so long as his belly is filled and his eyes kept a-pop," and "[h]e still believes in ghosts, and has only shifted his belief in witches to the political sphere." These are the men and women deciding who will be in charge in a democracy. "What is worth knowing he doesn't know and doesn't want to know; what he knows is not true."

In the next section, The Democratic State, Mencken turns his attention to the legislators whom voters elect. He also dismisses those who believe there is a great difference between representative government and direct democracy: "Under both forms the sovereign mob must employ agents to execute its will, and in either case the agents may have ideas of their own, based upon interests of their own, and the means at hand to do and get what they will." The requirement that legislators live in the districts they represent results in "the election of a depressing gang of incompetents, mainly petty lawyers and small-town bankers."

Mencken then turns to Democracy and Liberty. He contends that the common man has no interest in liberty: "he is not actually happy when free; he is uncomfortable, a bit alarmed, and intolerably lonely. He longs for the warm, reassuring smell of the herd, and is willing to take the herdsman with it."

Mencken's final word considers the future of democracy. Mencken writes that democracy may be self-devouring and that it distrusts itself, "abandoning its whole philosophy at the first sign of strain." When national safety is threatened, "All the great tribunes of democracy, on such occasions, convert themselves, by a process as simple as taking a deep breath, into despots of an almost fabulous ferocity. Lincoln, Roosevelt and Wilson come instantly to mind," wrote Mencken, who would, no question, add George W. Bush to that short list.

In his brief afterword, Pulitzer Prize–winner Anthony Lewis longs for the voice of Mencken today "to goad an altogether too timid — fawning is not too strong a word — national press." Of course, the press has completely fallen in love with the newest president who is viewed as a hero to many. "Public estimation of eminence runs in reverse ratio to its genuineness," writes Mencken, anticipating Obama, "the sort of eminence that the mob esteems most highly is precisely the sort that has least grounding in solid worth and honest accomplishment."