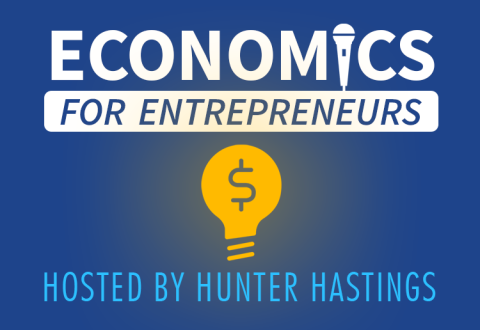 Bob Luddy is founder and CEO of CaptiveAire (CaptiveAire.com), the US market leader in commercial kitchen ventilation systems. It’s a $500MM+ business with 1,000+ employees and a 40+-year success record. Bob explains to Economics tor Entrepreneurs how these principles of Austrian economics, applied as active processes, played a part.

Say’s Law is a fundamental proposition in support of a production-driven market system as opposed to a consumption-driven view. It’s quite difficult to interpret and pithy summaries like “production creates its own demand” and “production precedes demand” don’t help entrepreneurs very much.

Bob Luddy doesn’t interpret, he applies. His application formula is this: new supply that is brought to market can solve problems that have not so far been solved. In that case, demand will result.

He gave this example: in the 1980s, many of the harmful effluents from cooking in a restaurant were escaping into the kitchen and sometimes even into the dining room. Those effluents could contain carcinogens, and at the very least, they're very unpleasant. That was a problem – but it was the status quo.

So Bob thought, in Say’s Law mode: if CaptiveAire could solve that problem, and bring the solution to market at an acceptable price, demand (i.e., lots of customers) would follow. That turned out to be exactly right.

Implied in this formula, of course, is attention to market signals regarding unsolved problems, a problem-solution design process, and a communications and customer interaction capability to inform the market of the new solution. Say’s Law applies, but not in isolation from other entrepreneurial actions. Those actions, Bob tells us, include accuracy and completeness in solving the problem, since many competitors may be trying to address it at the same time. Small details can make a big difference in applying Say’s Law.

Many podcast listeners have asked whether the concept of subjective value — which holds that it is the subjective and emotional evaluation by customers of an entrepreneurial offering that determines its market acceptance – applies equally in B2B markets as in B2C markets. Isn’t subjective value more relevant to consumers’ choices of fashion and food than it is to business customers’ choice of service es from vendors and suppliers?

Bob’s response: The subjectivity of value is very, very clear, and it's reinforced in the market every single day.

He used the example of bringing an integrated ventilation system to a restaurant. CaptiveAire might be successful in explaining all of the problems it's going to solve, its sustainability, and all relevant features and functions. Completion of a sale still comes down to the user subjectively assessing the exchange value, by asking “Am I willing to pay X amount of money to solve these problems?” The customer very well could say, "No, I'd rather live with some of the problems and depart with that much money.”

Bob emphasized the importance of communications in addressing the challenges raised in calibrating subjective value appraisal. A strategy of “solving all the problems” requires clear communications to the customer of how CaptiveAire solves the problems, so that the user can make a fully-informed decision. “If we don't communicate well, the value of the product in the user's mind may be lower. So part of the issue of getting a higher subjectivity of value is to have a full understanding of what the product does.” Clear communication is a component of value.

Comparative advantage is different. It’s an unmatched capability, often built over time by accumulating unique knowledge and experience and applying them in a unique capital structure. Such an advantage is longer term, maybe not absolutely invincible, but very hard to overcome.

Bob cited an example outside of his field: winemaking in Napa Valley, California. “If you decided you wanted to make wine and compete with Napa Valley, it's going to be a hard way to go.”

In the case of CapitveAire, “over time, we've been able to develop those design technologies, techniques, automated equipment and software, and when you marry all those things together and you integrate them, we gain a major comparative advantage. It's very hard to overcome because it's not one thing. It's many things, and they're all well thought out and have been developed over a number of years.”

Bob refers to on important element of CaptiveAire’s comparative advantage as “technique”. An example is “bending metal in real time and dynamically stacking it right up on the assembly line”, resulting in elimination of inventory, and very rapid turnaround time. It’s CaptiveAire’s unique methodology, developed over many years. Competitors can attempt to emulate but they fail. It’s a comparative advantage.

The cost of any choice or decision includes its opportunity cost: what option must be declined or given up in order to make the choice you prefer.

Bob explains: Understanding opportunity costs means turning down opportunities that would divert resources, and, instead, focus on getting the best utilization out of your human resources possible, and making the most sustainable solutions, which are going to save time and money over a period of time. We make 10 major categories of products. No more. To keep those products at the right price, at a high level of performance and sustainability requires all of our time. So if we divert any of that time, opportunity costs might result in us failing at our most primary mission.

He gave the example of a line of business that required extensive customization. The benefit of customization is that each customer feels that they enjoy unique value. The opportunity cost is that it’s impossible to be all things to all people — it absorbs too much time and too many resources. CaptiveAire addressed the opportunity cost problem by replacing customization with software-enabled adjustability of certain key inputs like voltage and phase. They found that this solution could effectively address 95% of customer-requested flexibility. While competitors asked, “Just tell us what you want, we’ll figure it out” and spent resources on responding, CaptiveAire was able to stay focused on its core mission and core products and services.

Every opportunity that comes a firm’s way must be examined through the lens of opportunity cost. Austrians see opportunity cost as an active process — the same way they see value and resource allocation and pricing and many other elements of business.

Pricing is a discovery process. At the same time, it’s an element of business strategy. Bob made a strategic decision at the outset to price “lower than the market,” while aiming for highest quality. The market informs CaptiveAire of what the pricing norm is, and therefore what “lower than the market” is. The discovery part is: how low to go to maximize unit sales and revenues. The second part of Austrian pricing theory is that producers choose their own costs. Bob chose to seek ways to keep costs low enough to sustain his pricing and quality strategy, which led him to the efficiencies, automation, speed, inventory-reduction, high technology, and opportunity-cost sensitivity that characterize CaptiveAire.

Price, cost, and profit are integrated in a strategic formula that’s tested every day by the customer’s willingness to pay the price of high quality.

Entrepreneurial Life: The Path From Startup to Market Leader by Bob Luddy: Mises.org/E4E_84_Book

Robert Luddy is the founder and owner of CaptiveAire, a manufacturer of kitchen ventilation systems.

Ben Ford on Situational Awareness and Managing for Constant Change

Most people prefer to continue to do what they’re used to rather than embrace change and constant experimentation...

Robert Luddy is the founder and owner of CaptiveAire, a manufacturer of kitchen ventilation systems.

We're building a bridge from Austrian theory to its application in business. This can help us gain a greater...