Fiat Money: The Root Cause of Our Financial Disaster | Mises Institute
Skip to main content

GET NEWS AND ARTICLES IN YOUR INBOXPrint
A
A
Home | Mises Library | Fiat Money: The Root Cause of Our Financial Disaster

Fiat Money: The Root Cause of Our Financial Disaster 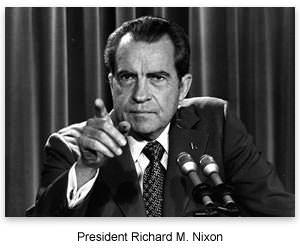 Is it possible that the ghastly unemployment, stagnant growth (and possible double-dip recession), and financial market convulsions all can be traced back to one single decision? Perhaps.

Monetary policy is the most recondite yet most pervasive and powerful of economic forces. Keynes, in The Economic Consequences of the Peace, wrote,

There is no subtler, no surer means of overturning the existing basis of society than to debauch the currency. The process engages all the hidden forces of economic law on the side of destruction, and does it in a manner which not one man in a million is able to diagnose.

The converse also is true. Restoring real monetary integrity engages all the hidden forces of economic law on the side of prosperity. And forces for monetary reform are very much in motion.

"Closing the gold window" was part of a series of dramatic but shocking and destructive tactics by Washington, including wage-price controls, a tariff barrier, and other measures, all leading to economic and financial-markets hell. All such measures save one stand discredited. The only piece of the Nixon Shock still in force was the piece most ostentatiously designated as temporary. Nixon: "I have directed Secretary Connally to suspend temporarily the convertibility of the dollar into gold …."

On the helicopter headed for Camp David, I was seated between [Herb] Stein and a Treasury official. When the Treasury man asked me what was up, I said it struck me as no big deal, that we would probably close the gold window. He leaned forward, put his face in his hands, and whispered, 'My God!' Watching this reaction, it occurred to me that this could be a bigger deal than I thought ….

It proved to be a very big deal. How ironic that the most staunch defenders of a pure paper standard, the sole remnant of Nixonomics, are a few influential "progressives" such as Paul Krugman, Joseph Stiglitz and Thomas Frank. Call them "the Nixonians." The poor jobs growth and stagnation of today's "world dollar standard" are not, unsurprisingly, dissimilar from the results of the Nixon Shock.

"How ironic that the most staunch defenders of a pure paper standard, the sole remnant of Nixonomics, are a few influential 'progressives' such as Paul Krugman, Joseph Stiglitz and Thomas Frank."

There is ample evidence that restoring gold convertibility would put the world back on the path to jobs, growth, and a balanced federal budget. Politicians do not like messing around with monetary policy. But gold, recently rediscovered by the tea party, has an impressive technical, economic, and political pedigree of gold convertibility and a very well established track record of job creation, properly applied, during many eras.

The silver lining to the whipsawing Dow is that it makes politicians open to new ideas, even new old ideas. Monetary statesmen from Alexander Hamilton forward have faced circumstances far more dire than those of today and turned things around. Modern example? The German economic miracle, the Wirtschaftswunder.

That miracle was founded in currency reform. On the very day when Ludwig Erhard's currency reform was put into place the economic paralysis ended. The "rightest" economist of the 20th century, Jacques Rueff, wrote (with André Piettre) about the turnaround beginning on the very day of the reform:

Shop windows were full of goods; factory chimneys were smoking and the streets swarmed with lorries. Everywhere the noise of new buildings going up replaced the deathly silence of the ruins. If the state of recovery was a surprise, its swiftness was even more so. In all sectors of economic life it began as the clocks struck on the day of currency reform. Only an eye-witness can give an account of the sudden effect which currency reform had on the size of stocks and the wealth of goods on display. Shops filled with goods from one day to the next; the factories began to work. On the eve of currency reform the Germans were aimlessly wandering about their towns in search of a few additional items of food. A day later they thought of nothing but producing them. One day apathy was mirrored in their faces while on the next a whole nation looked hopefully into the future.

Despite the unanimous opposition of his cabinet, de Gaulle adopted the entire Rueff plan, which required sweeping measures to balance the budget and make the franc convertible after 17.5% devaluation — though not without qualms. 'All your recommendations are excellent,' de Gaulle told Rueff. 'But if I apply them all and nothing happens, have you considered how much real pain it will cause across this country?' Rueff replied, "I give you my word, mon General, that the plan, if completely adopted, will re-establish equilibrium in our balance of payments within a few weeks. Of this I am absolutely sure; I accept that your opinion of me will depend entirely on the result.' (It did: ten years later, de Gaulle awarded Rueff the medal of the Legion of Honor.)

Today on this the 40th anniversary of the closing of the gold window a group of Americans issued a statement stating, in its conclusion,

[W]e support a 21st century international gold standard. America should lead by unilateral resumption of the gold standard. The U.S. dollar should be defined by law as convertible into a weight unit of gold, and Americans should be free to use gold itself as money without restriction or taxation. The U.S. should make an official proposal at an international monetary conference that major nations should use gold rather than the dollar or other national currencies to settle payments imbalances between one another. A new international monetary system, based on gold, without official reserve currencies, should emerge from the deliberations of the conference.

Many of the signers are associated with the American Principles Project, chaired by Sean Fieler, and the Lehrman Institute (with both of which this writer is professionally associated), chaired by Lewis E. Lehrman. Signers also include such important thought leaders as Atlas Foundation's Dr. Judy Shelton and Forbes Opinions editor John Tamny.

Politicians may have forgotten the power that real money, money of integrity such as currency convertible into gold, has to reverse an economic crisis. But the people have not. Earlier this year, the government of Utah restored, to international attention, the recognition of gold and silver coins as legal money. Now news emerges that the largest and most respected political party in Switzerland is supporting the work of the Goldfranc Association, led by citizen Thomas Jacob, to introduce a gold-convertible Swiss franc as a parallel currency.

Proponents are using the Swiss political process to put the creation of a gold franc in the Swiss Constitution. Jacob finds himself in the very distinguished company of Rueff and Erhard.

While London burns, Switzerland thrusts gold-based currency reform toward the center of the international debate on how to rescue the euro, end the debt crisis, and turbocharge economic growth and job creation with integrity, not Nixonian manipulation.

Will a world Wirtschaftswunder — an economic miracle — follow a restoration of gold convertibility? History shows how practical such a miracle can be.

Ralph Benko is the senior economic adviser to the American Principles Project and editor of The Lehrman Institute's the Gold Standard Now.