At the root of the current crisis in Europe are the actions of the European Central Bank. As Philipp Bagus explains in his new book, The Tragedy of the Euro, only a realization of the true costs the euro has imposed on the continent in the past can shed light on the path to future recovery.

European member states, the European Central Bank (ECB), and the International Monetary Fund (IMF) have pledged upward of €200 billion in bailout funds to prevent the turmoil from spreading. This is a large funding drain on an already-dangerous EU fiscal situation.

Standard & Poor's downgraded Greek government debt to junk status on April 27th amid fears of default. Market analysts gave Greece a 25–90 percent chance of defaulting on its existing debt, or requiring a restructuring (a default by other words). With its hands tied within the common currency area, there was no way that the Greek government could independently raise the funds necessary to roll over its burgeoning liabilities. Greece represents only 2.5 percent of the total eurozone economy, but a concerted bailout by the EU, the European Central Bank, and the IMF to the tune of €110 billion was deemed necessary to avert disaster.

A contagion sweeping the European continent would cause Greek problems to become a Europe-wide phenomenon. Calls for a bailout to stave off contagion were plentiful, with hysteria sweeping the continent.

In fact, nothing of the sort is occurring. We may do well to listen to no less an authority than Anna Schwartz on the topic: "Contagion, if the term is used accurately, occurs only in circumstances in which other countries are free of the problems of the country that first experienced trouble and yet suffered unwarranted investor disaffection."

As Bagus makes clear in his book, the word "contagion" does not seem to apply in any way to the eurozone's current debt crisis. A centrally directed monetary policy through the ECB in Frankfurt promoted a program of instability for over a decade. A unique interest-rate policy for the greater monetary union led to wildly divergent real interest rates. High-inflation periphery countries — those affectionately known as the PIIGS (Portugal, Ireland, Italy, Greece, and Spain) — witnessed their real interest rates dive to the lowest levels that most of their citizens had ever witnessed.

Not one country within the Eurozone today seems to fit the conventional definition of the word contagion — all their crises are linked by the same root cause.

A spending frenzy resulted from these low real rates. Interest-rate-sensitive assets — houses and other construction projects — were ballooned to the point of excess. The Spanish economy built 700,000 new homes in 2006, more than Germany, France and the United Kingdom (which experienced its own housing boom) could produce combined. Today Spain sits on one million empty housing units, more than the whole of the United States.

At the same time, an artificially high exchange rate caused import prices to dramatically fall in the periphery countries. Italians, Spaniards, and Greeks — people accustomed to less valuable currencies than their Northern European neighbors — saw a powerful foreign-exchange convergence sweep the continent during the late 1990s and early 2000s. The movement to a common currency meant that a common value of a currency would result. The dominance of the German economy, with its powerful Deutschmark, meant that these periphery countries would be forced into a more highly valued currency unit than their previous local currencies forced upon them.

This unbalanced state of affairs did not come to its present pinnacle on its own. A centralized monetary policy enacted through the European Central Bank resulted in detrimental effects for all. This is the real tragedy of the euro.

Where does this all leave Europeans today? Lacking an exit from the common currency or a direct monetization of their debts, Bagus explains that there are five avenues that a highly indebted European country may pursue to evade default.

Interestingly, the Greek government tried every one of these policies over the past year. Pensions and public-sector wages were cut to reduce public spending. Overtime-pay and employee-termination laws were reformed to increase competitiveness. The value-added tax was increased on all goods, with a special 10 percent increase in luxury taxes (alcohol, cigarettes, and fuel). Publicly owned companies were sold off, privatizing two-thirds of the public sector. External aid was sought in order to keep the country from sovereign default.

Unfortunately the bailout fund was just a drop in the bucket. When these debts come due, Greece will face its problems anew. The fundamentally unsustainable aspects of the situation have not been fixed.

When it was Ireland's turn later in the year, all the same options were pursued. All turned out to be insufficient and the country also required a bailout to avoid default. The next country, whether it be Portugal, Spain, Italy, or Belgium — the list goes on — will suffer the same fate.

Without an understanding of the true nature of the crisis, policies will fail to rectify its root causes. Bagus argues that the institutional setup of the monetary union not only allowed but also encouraged the type of imbalances that are now becoming increasingly apparent. Continual bailouts will not solve the real issue at hand.

Where to now? Targeting the effects of an unsustainable situation, as the current bailouts do, does nothing to fix the underlying situation. One European country can perhaps offer a roadmap to salvation for its beleaguered peers.

Two years ago Iceland found itself in the midst of the world's worst economic collapse of the 21st century. While several international bailouts were brokered to save the economy, the sheer size and depth of the problem soon became apparent —Iceland's economy was too big to bail. An oversized and bankrupt banking system was allowed to fail.

The short-term effect seemed disastrous — the stock market collapsed 95 percent, and Iceland's currency (the krona) fell 60 percent against the euro. Two positive effects resulted. First, a decimated exchange rate returned the country to sustainability — a large trade deficit has turned around into a growing surplus. Second, the effective bankruptcy caused the Icelandic government to reduce expenditures drastically. Instead of continuing to fuel an unsustainable situation, the Icelanders tightened their belts and turned fiscal deficits into surpluses. 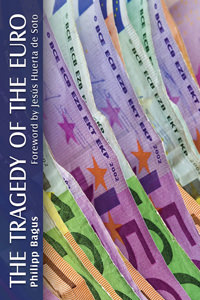 European economies have had little need as yet to enact such cuts. As Bagus explains, by continually accepting European sovereign debt as collateral for its refinancing operations (and even outright purchases of this debt as the Greek situation worsened), European governments have continued with little heed for their fiscal imbalances. The Irish government will run a deficit of over 30 percent of GDP this year. Such a situation cannot continue for long.

Europe's crisis was not accidental, nor will it be solved without some serious soul searching as to its causes. Philipp Bagus's The Tragedy of the Euro is essential reading for anyone who wants to know what plagues the European continent today, and what similar economies (including the United States') may have to face in the future.