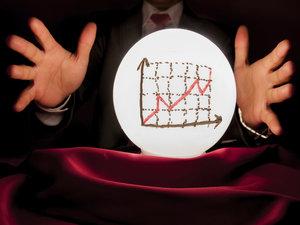 The positivist ideas dominant among economists led them to agree that, as stated by the motto of the Econometrics Society, “Science is prediction.” We are surrounded by forecasts about numerous economic indicators. “Experts” reveal the rate of growth with .1 percent precision as if they were reading the oracle or seeing the future in chicken entrails.

In the nineteenth century, people used to believe everything which was written in the newspapers. With time, they became more skeptical and began to question what has been considered as a reliable source of information. After that came television. Images have real power over the minds, but after a while, people began to mistrust the news and exercise their critical judgment. Oddly however, government statistics and economic predictions are held as truths since they exist and people only too rarely question the figures.

But if we can’t trust the government to produce safer rail travel or more affordable health care, why should we trust it to produce better economic predictions? Why would things be different for statistics and predictions?

The case of France is instructive on these matters. Indeed, the French Ministry of Finance‘s growth rate predictions, published each year, have a very poor record. These predictions are important since they are used to estimate government revenue for the following year. If the numbers are made up, then how can the parliament vote on the budget wisely? The government has steadfastly predicted the French GDP every year since 1999 and has recorded an average error of 1.03 percentage points — a meaningful gap when dealing with GDP.

In the last fifteen years, the French government has been overly optimistic thirteen times. This is not surprising when the predictions are subject to constant manipulation by politicians. Some highly ranked officials in the Ministry of Finance still remember the tragicomic episode when, during the summer or 2010, the then Minister of Finance Francois Baroin, had to meet with President Nicolas Sarkozy at Fort Brégançon, the French Camp David. Baroin submitted the 2011 growth rate forecast which was 1.2 percent. “We cannot announce 1.2%, it’s too low, let's say 1.5%” declared the minister to his team just before meeting with Sarkozy. President Sarkozy unsatisfied with the numbers as well, and with the stroke of a pen said: “we will do 2%!” Lucky for them, the growth rate that year was 1.7 percent. But even when it significantly misses the mark, the government always wins by manipulating the numbers. Who will remember the fake predictions in six months?

Private organizations and the European Commission, which are less susceptible to direct political pressure, perform only slightly better in predicting the French GDP figures. For example, the “Centre de Prévision de l’Expansion” has committed an average error of 0.75 percentage points for the 1999-2014 period.

The Problem with Mathematical Models

Although some private sector forecasters have more of a talent for guesswork than their public sector counterparts, the very assumption that we can compute predictions through “complex mathematical models” is flawed. Why, first of all, is the margin of error never published? Indeed, rather than giving a point estimate, would it not be more coherent to use a range? Second, to make forecasts, you need to make assumptions about how the economy works. If your assumptions are wrong, “sophisticated mathematical models” won’t fix that.

As Mark Thornton put it, “The dominance of positivism in economic methodology encourages economists to worry less about the logical consistency of their models and to concentrate more on the development of models that exploit historical data in making predictions.” Moreover, Austrian economists remind us that the future is always uncertain. If we could know the future with certainty, there would be no place for human action. Austrians are therefore skeptical about predictions. Ludwig von Mises claimed that economic theory can help us to make only qualitative predictions but cannot be used to produce quantitative predictions:

Economics can predict the effects to be expected from resorting to definite measures of economic policies. It can answer the question whether a definite policy is able to attain the ends aimed at and, if the answer is in the negative, what its real effects will be. But, of course, this prediction can be only “qualitative.” It cannot be “quantitative” as there are no constant relations between the factors and effects concerned. The practical value of economics is to be seen in this neatly circumscribed power of predicting the outcome of definite measures.

The economic future, like the political future, will be determined by future human behavior and decisions. That is why it is uncertain. And in spite of the enormous and constantly growing literature on business cycles, business forecasting will never, any more than opinion polls, become an exact science.

There’s Nothing Wrong with Predictions, Though

Only good economic theory can enable us to analyze the facts and help us make valid predictions. Richard Cantillon made correct predictions about John Law’s Mississippi Bubble system based on sound economic theory, and he made a fortune as a result. But good economics does not need complex mathematical models. Often, economists who were critical about the use of math in economic science were nonetheless excellent forecasters. For example, Yves Guyot, the great classical French economist was strongly opposed to the mathematization of economic science and criticized Léon Walras on this ground. However, he was the best in making economic predictions. Even Schumpeter, in History of Economic Analysis, was forced to admit that:

as businessman or politician, I should have consulted Guyot — who was a wizard at practical diagnosis — rather than Pareto in order to be enlightened on, say, the prospects of employment or of metal prices in the next six months.

Of course, Schumpeter denigrated the so-called “lack of scientific inspiration” of the French Classical school of economics — the close relative of the Austrian school of economics. It is however ironic that the “good economists” Schumpeter is speaking about — i.e., Pareto and Léon Walras — are those economists who developed very elegant mathematical models which are completely unable to give us any practical knowledge about what happens in the real world. Equations won’t tell us anything about how individuals act and therefore about how the economy works. If one wants to make good predictions, one has to master the basic laws of human action. Only then does it become possible to interpret correctly numbers and empirical facts.