GET NEWS AND ARTICLES IN YOUR INBOXPrint
A
A
Home | Mises Library | Does the Fed Need an Exit Strategy?

Does the Fed Need an Exit Strategy? In a recent article, Paul McCulley, managing director of PIMCO, was very enthusiastic about Bernanke's handling of the financial crisis, and argued that the Fed had the tools necessary to avert large price inflation. Unfortunately, McCulley's arguments have gaping holes; he has hardly dispelled my prediction of massive stagflation. Because McCulley's piece crystallizes what many analysts have been saying, it will be instructive to pick apart his main points.

No Need for Fed to Soak Up Reserves?

McCulley's most significant claim is that the Fed will be able to hike interest rates without selling off the assets on its balance sheet:

[T]his is really, really important stuff to understand, given the widespread yammering about the need for the Fed to have an exit strategy to de-create all the excess reserves it has created, as if they are intrinsically the kindling for an (eventual) rip-roaring inflationary fire. They are not.…

Before evaluating McCulley's claims, let's set the context. Since the summer of 2008, Bernanke has more than doubled the Fed's balance sheet. In essence, the Fed wrote checks on itself — drawing on money created out of thin air — in order to buy mortgage-backed securities and other "toxic" assets from financial institutions that had made horrible investments during the housing boom.

Under normal circumstances, the process wouldn't stop there. As many readers will recall from (horribly boring) principles lectures, our fractional-reserve banking system leads to a multiplier effect. The initial injection of $10 million into the banking system cascades into a much bigger expansion of the money supply held by the public. Specifically, what normally happens is that the commercial bank makes additional loans because of the increase in reserves.

Remember that banks only need to have a fraction of their customers' checking accounts "backed up" by either cash in the vault or reserves on deposit with the Fed. So in our example, Joe Smith's bank saw its reserves go up by $10 million, while its total customer deposits also went up by $10 million (in Joe Smith's checking account). That means the bank now has "excess reserves," i.e., reserves on deposit with the Fed over and above what it needs to cover its legal reserve requirement.

To get a sense of how much Bernanke's policies have increased the total amount of banks' "excess reserves," look at the following chart: 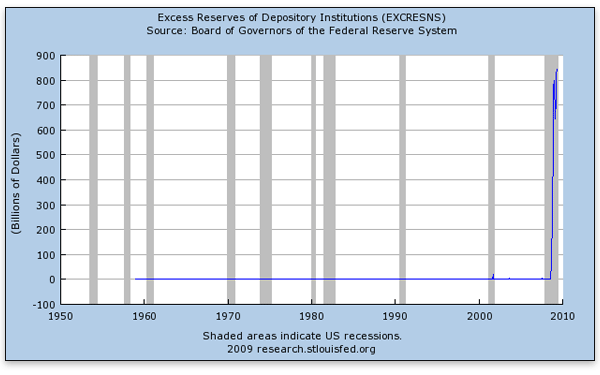 The above chart illustrates why more and more people are preparing for large price inflation. Thus far, the banks have been content to sit on those excess reserves, rather than granting new loans (which would expand the public's money supply). But if and when things begin to pick up, won't Bernanke (or his successor) need to reverse the huge expansion of the Fed's balance sheet? In other words, to prevent all of those excess reserves from fueling a huge increase in the public's checking-account balances, won't the Fed need to sell off its assets in order to destroy those reserves?

McCulley argues no. If the Fed wants to hike the federal-funds rate — which is the interest rate banks charge each other for overnight loans of reserves — it doesn't need to reduce the supply of reserves, as the textbooks teach us. Another option, according to McCulley, is for the Fed to simply increase how much interest it pays to banks, for keeping their reserves on deposit with the Fed. In the grand scheme, McCulley is saying that the banks won't use their excess reserves to make new loans to their customers, so long as the Fed itself offers a high enough interest rate to entice the banks to keep those excess reserves parked at the Fed.

McCulley's point is correct, as far it goes, but it's hardly a long-term fix. As I pointed out elsewhere, at best this "solution" (and the related one, of letting the Fed issue its own bonds) postpones the day of reckoning. The basic problem is that (at some point) the huge glut of excess reserves will start fueling expansions in the money supply, and hence price increases. Paying interest on reserves simply amplifies the problem, and exponentially at that. When the Fed "pays interest" on reserves, it doesn't offer to cut lawns or babysit for the bankers in question. No, it pays interest by further increasing the banks' reserves on deposit with the Fed.

If the Fed pursues McCulley's strategy, it will have to inject larger and larger amounts of new reserves into the banking system, in order to bribe bankers to keep their (excess) reserves on deposit with the Fed. As the supply of excess reserves grows exponentially, it will become more and more attractive for banks to lend some of them to their clients, and thus expand the money supply.

Smelling a Rat With PIMCO's Strategy

Imagine a head chef in a restaurant who is horrified to discover rats in his kitchen. He calls a few companies to decide what to do about the situation. Some people advise him to lay down traps; others suggest poison. But one advisor — steeped in the wisdom of Paul McCulley — recommends that the chef stop putting his discarded food scraps in the dumpster. Instead, he advises the chef to dump the food in the alley, just outside the kitchen door. This would entice rats to leave the kitchen for the food in the alley.

The chef is puzzled by this recommendation. Yes, it might temporarily solve the problem of the rats currently living in the kitchen, but wouldn't it just attract more rats in the long run? "Yes, that is possible," the maverick responds. "So you should be prepared to dump ever larger piles of food into the alley, to satisfy as many rats as show up, so they don't wander into your kitchen."

McCulley wraps up his article with the following prediction:

And when is all this going to happen? Last week, the markets started to romance the notion of before the end of 2009. To me, this is simply silly. In the matter of cutting off, and then killing, the fat tail risk of deflationary Armageddon, boldness in execution is no vice, while patience in declaring victory is indeed a virtue. The Fed has been bold and is committed to patience. Bravo! And the first Fed rate hike? Call it no sooner than 2011.

But beyond the unwitting endorsement of central planning (when it comes to interest rates), notice the odd timetable. Let's be generous with McCulley's prediction and say that the Fed's "virtuous" and "bold" behavior finally turns things around by January 2011.

Recall that Bernanke's extreme money pumping — necessary to avoid the "mistakes of the Great Depression" — began in September 2008. That means almost two-and-a-half years will have passed, before these wonderful remedies work their magic.

Am I the only one who wants a refund? Back when Bernanke and Henry Paulson were bailing out AIG et al. with hundreds of billions of dollars, they told us it was necessary to avert a global economic catastrophe. Did everyone realize that the lesser of two evils involved two-and-a-half years (at least) of stagnation and interest rates at 0 percent?

People may be surprised to learn that the Federal Reserve cut interest rates down to (then) record lows following the 1929 stock market crash as well. Herbert Hoover established the Reconstruction Finance Corporation to bail out financial institutions that had made bad loans during the late 1920s boom.

I wonder if Paul McCulley has ever entertained the idea that massive fiscal and monetary bailouts actually retard recovery? Isn't it funny that the two times in US history when the government intervened the most — namely the 1930s and today — we had the two worst economies in US history? Maybe the cause-and-effect is the opposite of what Krugman, PIMCO, and everybody on CNBC are telling us?