The Destruction of Capitalism (and Civilization) Unfortunately, the great libertarian polemics of the middle of the 20th century are taking on a newfound relevance as we trudge along the road to serfdom. Fortunately, the most important ideas in the classical-liberal tradition are crystallized in these works. One such work is Ludwig von Mises's 1956 book The Anticapitalistic Mentality. He offers a psychological sociology of ideas in which he surveys and attempts to explain the rise of anticapitalist thought in the West.

In his first chapter, "The Social Characteristics of Capitalism and the Psychological Causes of Its Vilification," he offers a contribution similar to Friedrich Hayek's in Capitalism and the Historians in that he seeks to set the record straight. With characteristic clarity and verve, he points out how "[t]he characteristic feature of modern capitalism is mass production of goods destined for consumption by the masses" (p. 1) and notes that "[c]apitalism deproletarianizes the 'common man' and elevates him to the rank of a 'bourgeois'" (p. 1). In much the same fashion, Hayek argued that the creation of the proletariat was not due to increasing immiseration but due to the fact that advances under capitalism allowed people on the margins of society to survive and to become members of the proletariat rather than entries into British mortality statistics. The creation of the proletariat was a demographic shift brought on by the success of capitalism, not by any inherent tendency for it to increase the exploitation of the workers.

For Mises, it was "obvious that man's discretion to shape his fate can never trespass the limits drawn by what are called the laws of nature" (p. 2). We don't have the option of assuming away the law of gravity or the laws of thermodynamics. One of the fundamental contributions of 19th- and 20th-century political economy was that it showed that we do not have the option of assuming away the laws of supply and demand or the law of comparative advantage.

One of the consequences of interventionism, according to Mises is "a return to barbarism." While things have not gone so far as the generation of total chaos or barbarism, this has been evident in the experiments with totalitarianism and hyperpopulism in Asia, Europe, and Latin America in the 20th century.

I fear that we are seeing this in the United States. The change is slow, incremental, and difficult to notice, but we can trace some of the increasing divisions in the world to state action that pit brother against brother and friend against friend. Increasing global integration occurs in spite of state efforts to divide us. Rhetoric about "working together" and understanding our common responsibilities to one another is superficially appealing, but it is fundamentally divisive. Embedded in these statements are assumptions about who is to serve and who is to be served and assumptions about who is to produce and who is to consume. It necessarily assumes a class of predators and a class of prey — or perhaps a more apt metaphor would be a class of parasites and a class of hosts. It does not recognize the fundamental and ennobling effects of capitalism.

Is the entrepeneurial class a new plutocracy? Bourgeois riches come from customer service. Aristocratic riches are expropriated (p. 5). Aristocracy rests on intrinsic value whereas capitalism rests on the exchange of value for value. One's relationship with the strongman under capitalism is of limited value. In medieval Europe, people attained ranks of privilege not by providing value but by attaching themselves to people who were victorious in war (Mises 1956 [1994]:6–7).

In a society based on caste and status, the individual can ascribe adverse fate to conditions beyond his own control. He is a slave because the superhuman powers that determine all becoming had assigned him this rank. It is not his doing, and there is no reason for him to be ashamed of his humbleness. … [In capitalism,] everybody's station in life depends on his own doing. (p. 9)

Mises explains anticapitalism as an element of the psychology of envy:

Everybody's self-reliance and moral equilibrium are undermined by the spectacle of those who have given proof of greater abilities and capacities. Everybody is aware of his own defeat and insufficiency. (p. 10)

This isn't legitimately actionable. In the hyperjargon of welfare economics, it isn't clear that we should weight envy in the social-welfare function.

Even beyond this, what do we do when we shackle those who can avoid hurting the feelings of those who cannot? Suppose Bob is a painter. Bob does not become a great painter if we prevent better painters from painting. All we do is destroy the output of those who can. As Ayn Rand pointed out, using force to thwart ability means using force to try to negate reality. Mises offers the following advice:

To the grumbler who complains about the unfairness of the market system only one piece of advice can be given: If you want to acquire wealth, then try to satisfy the public by offering them something that is cheaper or which they like better. Try to supersede Pinkapinka by mixing another beverage. Equality under the law gives you the power to challenge every millionaire. It is — in a market not sabotaged by government-imposed restrictions — exclusively your fault if you do not outstrip the chocolate king, the movie star and the boxing champion. (p. 8) 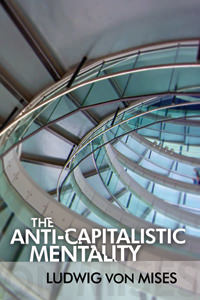 Contempt for the incremental and unspectacular innovations of the marketplace, and in particular contempt for those who reap the rewards from these innovations, are misplaced. Some chafe at the millions earned by someone who offers a trifling innovation and dismiss it with a haughty "I could do that." I respond, why didn't you? Sometimes it is said "anyone could do that!" Again I respond, why didn't they? The workman is worthy of his wages. So too is the entrepreneur worthy of his profits.

Ludwig von Mises wrote some of his greatest work after fleeing the grasping hand of the Nazis, and he spent his productive decades in the United States grappling with the monster of totalitarianism that threatened liberty and prosperity worldwide. Even though it was written decades ago, The Anticapitalistic Mentality remains freshly relevant in today's supposed crisis of liberal market economies. In 1956, Mises showed how the supposed failures of the market economy were failures of the state and documented the traits of anticapitalism. In 2009, the facts have changed but the message remains the same.