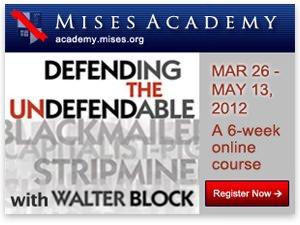 [Walter Block will be teaching a 6-week online course on his classic work, Defending the Undefendable, starting March 26, 2012. Enroll today.]

At first glance it is not hard to answer the question, "Is blackmail really illegitimate?" The only problem it would seem to pose is, "Why is it being asked at all?"

Do not blackmailers, well, blackmail people? And what could be worse? Blackmailers prey on people's dark, hidden secrets. They threaten to expose and publicize them. They bleed their victims and often drive them to suicide.

We will find, however, that the case against the blackmailer cannot stand serious analysis; that it is based upon a tissue of unexamined shibboleths and deep philosophical misunderstandings.

When the blackmailer demands more than the secret is worth, his demand will not be met and the information will become public. However, in this case the person is no worse off with the blackmailer than he would have been with the inveterate gossip. It is indeed difficult then to account for the vilification suffered by the blackmailer, at least compared to the gossip, who is usually dismissed with slight contempt and smugness.

"This is my kid, Mr. T. He'll be blackmailing you from now on — I'm retiring to Florida."

Blackmail need not entail the offer of silence in return for money. This is only the best known form: it may be defined without reference to either. Defined in general terms, blackmail is the threat to do something — anything that is not in itself illegal — unless certain demands are met.

Many actions in the public arena qualify as acts of blackmail, but, instead of being vilified, they have often attained a status of respectability! For example, the recent lettuce boycott is a form of blackmail. Through the lettuce boycott (or any boycott), threats are made to retailers and wholesalers of fruits and vegetables. If they handle nonunion lettuce, the boycotters assert, people will be asked not to patronize their establishments. This conforms perfectly to the definition: a threat that something, not in itself illegal, will take place unless certain demands are met.

In blackmail, however, what is being "threatened" is something that the blackmailer does have a right to do — whether it be exercising the right of free speech, refusing to patronize certain stores, or persuading others to do likewise. What is being threatened is not in itself illegitimate; it is, therefore, not possible to call the "threat" an illegitimate threat.

Blackmail can only be illegitimate when there is a special foresworn relationship between the blackmailer and the blackmailed. A secret-keeper may take a lawyer or a private investigator into his confidence on the condition that the confidence be maintained in secrecy.

If the lawyer or private investigator attempts to blackmail the secret-keeper, that would be in violation of the contract and, therefore, illegitimate. However, if a stranger holds the secret without contractual obligations, then it is legitimate to offer to "sell" his silence.

In addition to being a legitimate activity, blackmail has some good effects, litanies to the contrary notwithstanding. Apart from some innocent victims who are caught in the net, who does the blackmailer usually prey upon?

"The sole difference between a gossip and a blackmailer is that the blackmailer will refrain from speaking — for a price."

In the main, there are two groups. One group is composed of criminals: murderers, thieves, swindlers, embezzlers, cheaters, rapists, etc. The other group consists of people who engage in activities, not illegitimate in themselves, that are contrary to the mores and habits of the majority: homosexuals, sadomasochists, sexual perverts, communists, adulterers, etc. The institution of blackmail has beneficial, but different, effects upon each of these groups.

In the case of criminals, blackmail and the threat of blackmail serve as deterrents. They add to the risks involved in criminal activity. How many of the anonymous tips received by the police — the value of which cannot be overestimated — can be traced, directly or indirectly, to blackmail? How many criminals are led to pursue crime on their own, eschewing the aid of fellow criminals in "jobs" that call for cooperation, out of the fear of possible blackmail?

Finally, there are those individuals who are on the verge of committing crimes, or at the "margin of criminality" (as the economist would say), where the least factor will propel them one way or another. The additional fear of blackmail may be enough, in some cases, to dissuade them from crime.

It is sometimes said that what diminishes crime is not the penalty attached to the crime but the certainty of being caught. Although this controversy rages with great relevance in current debates on capital punishment, it will suffice to point out that the institution of blackmail does both. It increases the penalty associated with crime, as it forces criminals to share part of their loot with the blackmailer. It also raises the probability of being apprehended, as blackmailers are added to police forces, private citizen and vigilante groups, and other anticrime units.

Blackmailers, who are often members in good standing in the criminal world, are in an advantageous position to foil crimes. Their "inside" status surpasses even that of the spy or infiltrator, who is forced to play a role.

Homosexuality, for instance, is technically illegal in some instances, but not really criminal, since it involves no aggression. For individual homosexuals, blackmail very often causes considerable harm and can hardly be considered beneficial. But for the group as a whole, that is, for each individual as a member of the group, blackmail has helped by making the public more aware and accustomed to homosexuality.

Forcing individual members of a socially oppressed group into the open, or "out of the closet," cannot, of course, be considered a service. The use of force is a violation of an individual's rights. But still, it does engender an awareness on the part of members of a group of one another's existence. In forcing this perception, blackmail can legitimately take some small share of the credit in liberating people whose only crime is a deviation from the norm in a noncriminal way.

In reflecting on the old aphorism, "the truth shall make you free," the only "weapon" at the disposal of the blackmailer is the truth. In using the truth to back up his threats (as on occasion he must), he sets the truth free, very often without intent, to do whatever good or bad it is capable of doing.

Walter Block will be teaching a 6-week online course on his classic work, Defending the Undefendable, starting March 26, 2012. Enroll today.