The Danger of External Debts 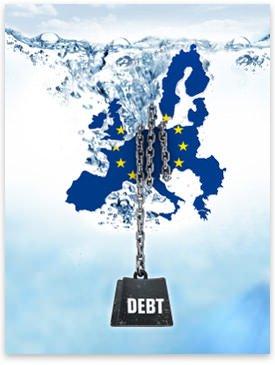 Economists and journalists often point to the danger of external public debts — in contrast to internal debts, which are regarded as less troublesome. Japan is a case in point. Japan has an enormous public-debt-to-GDP ratio of more than 200 percent. It is argued that the high ratio is not a problem, because the Japanese save a lot and government bonds are held mostly by Japanese citizens; it is internal debt.

In contrast, Spain with a much lower public-debt-to-GDP ratio (expected to be at 80 percent at the end of this year) is regarded as more unstable by many investors. One reason given for the Spanish fragility is that about half of Spanish government bonds are held by foreigners.1

At first sight, one may doubt this line of reasoning. In fact, as an individual living in Spain, I do not care if I get a loan from a Spanish or a German friend. Why would the Spanish government be different? Why care if loans come from Spaniards or from Germans?

Governments are ultimately based on physical violence or the threat of physical violence. The state is the monopolist of violence in a given territory. And in violence lies the difference. Internally held debts generate income for citizens, which can be taxed by the threat of violence. This implies that part of the interest paid on internal debt flows back to the government through taxes. Interest paid on external debt, in contrast, is taxed by foreign countries.

There is another, even more compelling, reason why the monopoly of violence is important: I can force neither my Spanish nor my German friend to roll over his loan to me when it comes due. While the government cannot force individuals outside its territory to roll over loans, it can force citizens and institutions within its jurisdiction to do so. In a more subtle form, governments can pressure their traditional financiers, the banks, to roll over public debts.

Banks and governments live in a relationship akin to a symbiosis. Governments have granted banks the privilege to hold fractional reserve and have given them implicit and explicit bailout guarantees. Further support is provided through a government's controlled central bank, which may help out in times of liquidity problems. In addition, governments control the banking system through a myriad of regulations. In return for the privilege to create money out of thin air, banks use this power to finance governments buying their bonds.

Due to this intensive relationship and the government's monopoly of violence, the Japanese government can pressure its banks to roll over outstanding debt. It can also pressure them to abstain from abrupt selling and encourage them to take even more debt onto their books. Yet the Japanese government cannot force foreigners to abstain from selling its debt or to accumulate more of it. Here lies the danger for governments with external public debts such as the Spanish one.

External public debts also pose a danger for the US government. Foreign central banks such as the Bank of China or the Bank of Japan hold important sums of US government bonds. The threat, credible or not, to throw these bonds on the market may give their governments, especially the Chinese one, some political leverage.

What about a Trade Deficit?

In regard to the stability of a currency or the sustainability of government debts, the balance of trade (the difference between exports and imports of goods and services) is also important.

An export surplus (abstracting from factor income and transfer payments) implies that a country accumulates foreign assets. As foreign assets are accumulated, the currency tends to be stronger. Foreign assets can be used in times of crisis to pay for damages. Japan again is a case in point. After the earthquake in March 2011, foreign assets were repatriated into Japan, paying for necessary imports. Japanese citizens sold their dollars and euros to repair damage at home. There was no need to ask for loans denominated in foreign currencies, thereby putting pressure on the yen.

Japan's export surpluses manifest themselves also on the balance sheet of the Bank of Japan. The Bank of Japan has bought foreign currencies from Japanese exporters. These reserves could be used in a crisis situation to reduce public debts or defend the value of the currency on foreign exchange markets. In fact, the net level of Japan's public debts falls 20 percent taking into account the foreign exchange reserve holdings of the Bank of Japan (over $1 trillion). Thus, export surpluses tend to strengthen a currency and the sustainability of public debts.

On the contrary, import surpluses (abstracting from factor income or transfers) result in net foreign debts. More goods are imported than exported. The difference is paid for by new debts. These debts are often held in the form of government bonds. A country with years of import deficits is likely to be exposed to large holdings of external public debts that may pose problems for the government in the future as we have discussed above.

The balance of trade may also be an indicator for the competitiveness of an economy, and, indirectly, for the quality of a currency.

Economies with high and inflexible wages — as in southern Europe — may be uncompetitive, running a trade deficit. The uncompetitiveness is maintained and made possible by high government spending. Southern eurozone governments hired people into huge public sectors, arranged generous and early retirement schemes, and offered unemployment subsidies, thereby alleviating the consequence of the unemployment caused by inflexible labor markets. The result of the government spending was therefore not only a lack of competitiveness and a trade deficit but also a government deficit. Therefore, large trade and government deficits often go hand in hand.