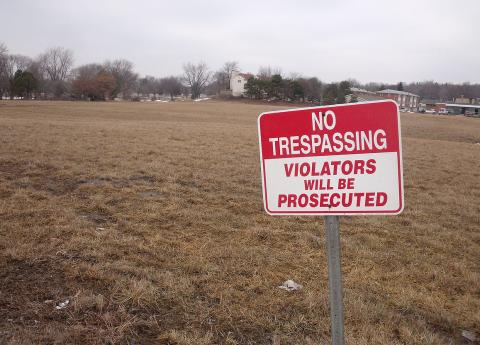 The Supreme Court's recent 6–3 ruling that a 1952 Virginia law banning cross burning does not violate the protection of free speech under the Constitution pleased many who would like to stick it to racists and bigots, but it certainly was not a victory for the First Amendment.

In its decision, the Court demonstrated not only that it does not consistently protect those freedoms—whether utilized responsibly or not—contained in the Bill of Rights, but that it lacks a fundamental understanding of the principles on which those rights are based. Those rights that we are entitled to enjoy were not plucked from thin air, but rather were based on a system of property rights.

What is interesting about the decision is that it upholds a law that bans the burning of a cross "with the intent of intimidating any person or group of persons" irrespective of whether the burning takes place on public or private property. This is a key distinction that the Court misses, choosing instead to focus on devising a suitable model for determining an alleged perpetrator's intent. So long as property rights are protected, though, there is no need to try to discern or prove one's intent.

The Court's ruling covers two cases prosecuted under the Virginia law in 1998. One involved two white men who had placed a four-foot cross in the backyard of a black neighbor and attempted to burn it. The other concerned the organizer of a Ku Klux Klan rally, where a thirty-foot cross was burned on private property with the permission of the owner. The two cases are quite different, and the Court erred in not recognizing them as such.

The first case clearly involves a crime, as the two men trespassed on their neighbor's property—thus causing a threat to him and his family—and defaced his property. Their intent is irrelevant, except to the extent that the property owner's perception of their intentions will guide his actions in response. If he thinks they are just causing a disturbance, for example, he may yell at them to get off his lawn and/or go call the police. If he thinks they intend to put his life or the lives of his family in jeopardy, he may call the cops and then come out on the front porch with a shotgun.

The behavior of the Klansmen in the second case, however, should not be considered a criminal act. While their rally may have been detestable, and they may have said some really nasty, racist things, they did not infringe upon the rights (property or otherwise) of anyone else.

It is surprising that the Court would consider it as such, given its 1992 ruling that struck down a St. Paul, Minnesota law that prohibited cross burning that was intended to incite anger in people based on "race, color, creed, religion or gender" and numerous other rulings that have protected the rights to burn flags and display swastikas at rallies. The Court is thus throwing jurisprudence and objectivity out the window in favor of rendering a politically popular outcome.

Justice Clarence Thomas, who was outspoken in condemning cross burning and the "reign of terror" imposed by the Ku Klux Klan during arguments heard in December, wrote a separate opinion concurring in part with the other five members of the majority but calling for an even stricter interpretation that would recognize the mere act of burning a cross as suitable evidence of an intent to intimidate. Writes Thomas, "Just as one cannot burn down someone's house to make a political point and then seek refuge in the First Amendment, those who hate cannot terrorize and intimidate to make their point."

But this completely misses the point. One cannot burn down another's house because it is a crime to destroy someone else's property and it is a crime to attempt to deprive someone of his life because we each own our bodies and our right to protect them from harm.

Thomas and the other majority members—Chief Justice Rehnquist and Justices O'Connor, Stevens, Scalia, and Breyer—simply fail to understand that the First Amendment, and the other amendments that make up the Bill of Rights, is rooted in the protection of property. The Founding Fathers understood this. And so did Murray Rothbard.

Rothbard's For a New Liberty: The Libertarian Manifesto says:

"If a man has the right to self-ownership, to the control of his life, then in the real world he must also have the right to sustain his life by grappling with and transforming resources; he must be able to own the ground and the resources on which he stands and which he must use. In short, to sustain his "human right"—or his property rights in his own person—he must also have the property right in the material world, in the objects which he produces." (P.42-43)

The return to a property-rights theory of justice would eliminate the prosecution of those engaged in so called victimless crimes and return the right of each to pursue his own happiness free of the violations of the State. This may irk the busybody, conservative do-gooders as well as the liberals in the politically correct crowd, but that is not necessarily a bad thing. It is the challenge and the triumph of a free society.

Adam B. Summers is an editorial writer and columnist at the Orange County Register. He holds an M.A. in economics from George Mason University and a B.A. with a double-major in economics and political science from the University of California, Los Angeles.