GET NEWS AND ARTICLES IN YOUR INBOXPrint
A
A
Home | Mises Library | Corporatist Pigs! 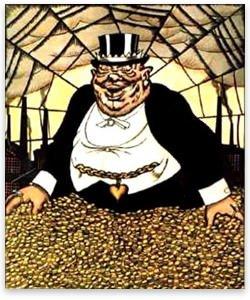 "Replacing a government monopoly with a government-sanctioned corporate monopoly simply transfers the bureaucratic inefficiency and corruption from one entity to another."

Throngs of tweenies rushed to buy their copies of the June 2009 issue of Rolling Stone, eager to read about the adorable Jonas Brothers. As they flipped it open, questions rushed through their heads: "Are they on tour?" "Do they have girlfriends?" "What do they look for in a girl?"

What those girls weren't asking themselves was "How was Goldman Sachs, the world's most profitable investment bank, involved in creating the current financial crisis?" But that didn't stop Matt Taibbi from answering that question in the same issue of Rolling Stone, in his article, "The Great American Bubble Machine."

Interestingly, in a November 9, 2007, interview with Marty Beckerman of Reason, Taibbi actually described himself as "more of a libertarian than anything else." Unfortunately, in keeping with Rolling Stone's dominant line, Taibbi's attack on Goldman Sachs was quite antimarket. He coolly placed the blame for the US financial crisis on the shoulders of this lone company.

However, he did manage to illuminate the bank's relationship with government regulators and the Federal Reserve. As the saying goes, "even a broken clock is right twice a day."

Here's the danger though: The Rolling Stone audience is young and impressionable. Most already harbor the belief that the current economic crisis is the result of capitalism's failure.

Now, I'm not going to delve into the ins and outs of Goldman Sachs or dissect Taibbi's "investigative journalism." But I feel it important to set the record straight in case one rogue 13-year-old decides to learn more about the situation with Goldman and happens to stumble upon Mises.org.

"What those girls weren't asking themselves was 'How was Goldman Sachs, the world's most profitable investment bank, involved in creating the current financial crisis?'"

What you need to know is the big picture: If America is circling the drain, Goldman Sachs has found a way to be that drain — an extremely unfortunate loophole in the system of Western democratic capitalism, which never foresaw that in a society governed passively by free markets and free elections, organized greed always defeats disorganized democracy.

Yet a few paragraphs later he goes on to say,

They [Goldman] hoover up vast sums from the middle and lower floors of society with the aid of a crippled and corrupt state that allows it to rewrite the rules in exchange for the relative pennies the bank throws at political patronage.

There you have it. Taibbi first characterizes the corruption at Goldman Sachs as an inevitable result of "free markets and free elections," then argues that it was made possible by "the aid of a crippled and corrupt state." So, which is it? The free markets or the state-sanctioned corruption? These are entirely different arguments and they must be carefully treated as such.

I will be the first to argue against the state aiding and abetting corporations. Among the advocates of the laissez-faire system, there is a clear understanding that such aid is corporatism or corporate socialism.

Yet in all such schemes, the hand of government regulators is disguised so well that when the scheme fails, most people see the puppet but overlook the puppet master. Perhaps Taibbi can be forgiven for the error. After all, we have been witness to numerous such shell games at the hands of government.

Consider Philadelphia's failed attempt to "privatize" education. The city hired the services of a supposedly private corporation called Edison to oversee it. All the schools were taken over by Edison and the city paid it to manage them.

With no competition in sight and a guarantee of payment by the government regardless of performance, Edison's operation was completely inefficient, and it promptly failed.

The proponents of public education were ecstatic. They could say to the world, "See — we're open-minded. We tried using the market to educate children and it failed; capitalism failed." Wrong! Capitalism didn't fail; corporatism failed.

Capitalism works when government stays out of the way completely. In a free market, prices go down and quality goes up. Why? Because private companies are competing with one another for your dollars.

"It was the hidden hand of government that failed, not the market."

The rationale behind "privatizing" education is that it would introduce the element of competition. Schools would not hold a monopoly in their districts and would not be guaranteed students. Therefore, they would have to improve education levels to attract their students. Replacing a government monopoly with a government-sanctioned corporate monopoly simply transfers the bureaucratic inefficiency and corruption from one entity to another.

And who can forget California's "energy deregulation" scheme? That fiasco began when voters passed a ballot measure mandating energy deregulation. Well, the legislature together with a handful of private corporations (including Enron) devised a system guaranteed to fail: they partially deregulated energy supply while keeping consumer prices tightly capped.

As was to be expected, energy sold on the spot market increased overall costs for suppliers, due in large part to manufactured shortages by energy brokers like Enron. Consumers gobbled up more and more wattage in the comfort of prices that government regulators kept artificially low, and the entire system began to collapse. Moreover, the government made it impossible for anyone to construct new power plants, thus ensuring that no one would be able to meet the rising demand for energy.

In the end, the scheme worked from the perspective of the government and the corporate energy brokers. A few companies earned record profits on the energy spot market, Californians were forced to endure rolling blackouts due to supply shortages, and consumer prices ultimately rose to meet demand. The spin was the same: free markets in energy do not work. But once again, it was the hidden hand of government that failed, not the market.

And don't get me started on Fannie Mae and Freddie Mac. These quasi-private corporations may benefit from privatized profits but their losses are socialized, creating a huge moral hazard. Where does it all end?

Whether we are discussing farm subsidies, bailouts, corporate favoritism, or licenses and privileges given to certain companies, we are in fact seeing the myriad ways that government has reared its head into the markets. Government and corporations invent scheme after scheme to ensure the superficial appearance of free enterprise, line the pockets of each, and shield the government from any blame.

These market interventions create all-powerful corporations, which are seen as capitalist greed at its worst. This typically occurs among utilities companies. Their existence and profits are often guaranteed by government, making them completely inefficient. The public then blames the inefficiency on corporate greed and, of course, on capitalism.

In reality, this is just more socialism.

So Matt Taibbi missed the mark entirely. Goldman Sachs may well deserve its share of blame for the financial crisis, but shouldn't we also take a quick gander at the hidden hand of government?

Corporatism may have failed, but true free-market capitalism has never even been given a chance. And, unfortunately for those 13-year-old girls, Kevin Jonas is, in fact, engaged! :(